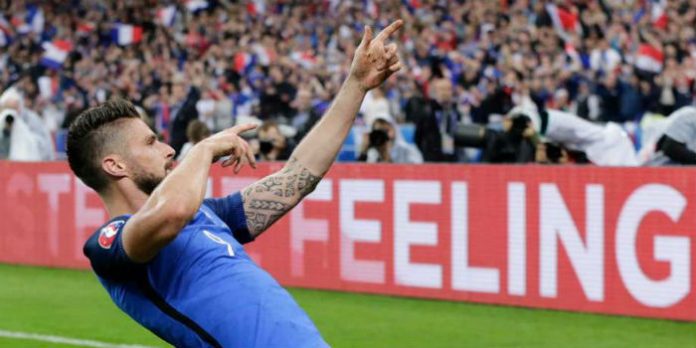 Having missed out through injury last time around, Olivier Giroud has been recalled to the France squad for their upcoming internationals.

The Arsenal striker has scored three goals in his last two games, netting a brace against Sunderland and an important equaliser in midweek against Ludogorets.

That has been enough to see him named once again in Didier Deschamps squad as they prepare to face Sweden on Friday November 11th, and for a friendly against the Ivory Coast the following week.

Laurent Koscielny is, of course, in the squad as well, because he’s brilliant. One would hope that Deschamps will follow the lead of Germany – who have rested Mesut Ozil completely – and perhaps rest the Arsenal skipper for the friendly.

He know what Koscielny can do at this point, so risking him in a game that means nothing would be annoying. For Giroud, however, it might be a chance to get more playing time under his belt after his stop-start season.

After the forced break due to injury, this will be useful minutes to fully get back to speed for Giroud.

Its great to have two good options for the striker position.

Wenger has already spoken about different formation possibilities, which will make us less predictable for the managers (read Mourini) who thrive on studying the opposition and setting up their defence.

The French National Team would be a typically attractive squad, and then you add in Giroud and Griezmann, and it takes it to a whole new level

Good news for our HFB. Giroud really does deserve this.

They are clearly utilising him for the pointless friendlies, in order to rest and save the £50m man aka Lacazette for the real stuff.

really you think that !! he is france best goalscorer in the last 2 years,lacazette is like 3rd/4th choice right now
giroud and gameiro are fighting for the first spot,very strange that Modeste hasnt been selected , he has been scoring for fun in germany

The Big Man is back!

Looks like Deschamps is done with Benzema. Don’t think they need him anymore as Griezmann and Giroud are a good pairing. Good to see Fekir and Dembele on there as well.

Dembele could be one heck of a player

I don’t know either, but I’ll take it from an AFC perspective 🙂

Not only Pogba but also Sissoko over LeCoq?? Not cool Didier…

Hope they don’t use Giroud and Kos for the friendly. We need them back fit, rested and ready to rock the Premiership!

BELOW from Arsenal website. As I mentioned before, There is no mythical Plan B and there should not be one. Its limited of thought to do so and the same mentality that predicted Alexis would not prosper as a centre forward :- Just because Olivier Giroud came off the bench to score twice at Sunderland last weekend, it doesn’t make him a ‘Plan B’. That’s because no Arsenal player is considered by Arsène Wenger as anything but a top-class performer who can have an impact from the start of a game – or from the bench. “There is no Plan… Read more »

I guess when a game is going badly and Wenger makes an attacking sub to try and get a goal, we can’t call that plan B? It’s plan A, part 2?

Don’t let the professor use his mind tricks on you Santori, he says all kinds of wacky stuff to make the players feel important

Glad someone see it this way as well…

With Guroud back and firing, teams will be scared seeing us as an opposition cos u attack us we send Sanchez and Walcot to you and you defend against us we send Giroud to you….. And Ozil can’t stop nicking a living

Not on subject but… Fenerbahce! HaHa! Manure they really are.

Man, united are sure reaping the instant karma that comes with hiring an absolute cunt as your gaffer.

And the karma of spending a world record fee on a player they let go for nothing – only to find their original judgement was actually correct! Still, at least they’re not wasting £300k week on a striker who is pensionable age an has an ego the size of Africa!

This man right here deserves a hatrick in that blue jersey

“They [Fenerbahce] deserved to win, football is not just about quality, it is also about effort, commitments, playing the limits and giving everything. A team that concedes after two minutes is a team that is not ready, not mentally prepared, not focused, not concentrated.”

Talk about throwing your players under the bus!

And just whose job is it to ensure the players are ready, mentally prepared, focused, and concentrated? Eh, Jose? Whose job is that?