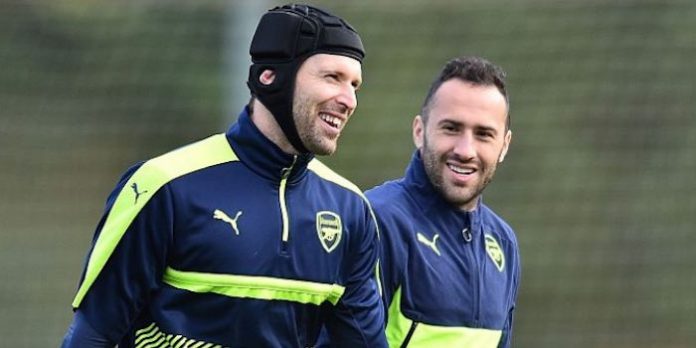 David Ospina has been Arsenal’s European goalkeeper this season, playing in all our Champions League games thus far.

It’s Arsene Wenger’s way of keeping his two goalkeepers happy, and the Colombian has put in some excellent performances, not least in the reverse fixture in Paris when he made some crucial interventions to keep Arsenal in the game.

Ospina was on duty alongside his manager at the press conference ahead of tomorrow night’s game, and he said the rivalry between himself and the former Czech international is a healthy one.

Asked how it feels to play in Europe, but then sit on the bench for the league games, the former Nice man admitted it was difficult.

“You have to show what you can do in training, you have to be very mentally tough,” he said.

“I compete with Petr Cech for the position, and we both want to play. So there is competition for places. It’s important, that rivalry.

“He’s a very good goalkeeper. We’re all familiar with how good he is. That allows me to have fierce competition so I work as hard as I can to play.

“As footballers, we want to play in every match, but you have to respect the manager’s decision.”

Let’s hope that competition between them keeps them both on their toes, if it does it will serve us well.

Happy to have both of them on the books!

Ospina is a model professional, and a very good goalkeeper too. He could make a great replacement for Čech in a few years.

and he was the man of the match last time against PSG! Hope we don’t give him as much work this time.

Not related but Spuds…haha. Back to Europa League where you belong! (If they are lucky)

Just need to top them in the league now

Thursday is Sp*rsday my friends.

What’s the betting they throw the match against CSKA just to avoid playing in the Europa League? I wouldn’t put it past them, the cheating cunts.

surely wojciech will be sold next season? these two look hard to displace and i don’t think wenger wants to sell either.

Ospinas goalkeeping stats over the last 4 years for club and country are actually up there among the best in the world. But i think Ospinas relatively small size is what irks some people about him because the goal just looks really big with him in it while bigger keepers like Cech makes the goal look smaller. But looking at the numbers Ospina is on par with Cech, and even edging infront. Ofcourse Ospina only have 4 games in Champions League this season while Cech has 12 games in the league, so not the best for comparison, But so far… Read more »