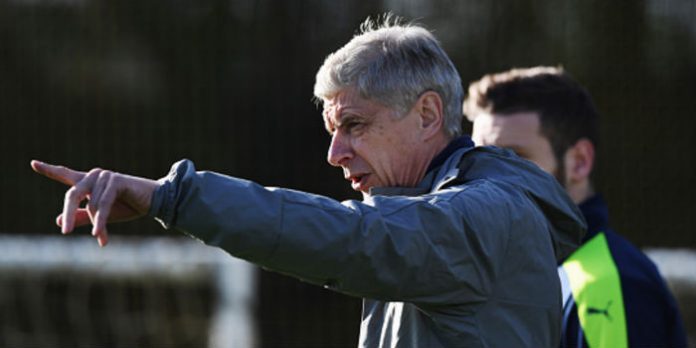 Arsene Wenger says he’s not sure whether topping Champions League Group A will prove to be an advantage for Arsenal but that won’t stop his side from doing their utmost to beat PSG on Matchday 5.

The Gunners welcome the Ligue 1 champions to the Emirates on Tuesday knowing a win will secure them top spot in the group and the potential – on paper, anyway – to draw a slightly weaker side in the first knockout stage.

Arsenal have failed to progress to the quarter-finals for six successive seasons, a record that concerns the boss, although his short-term aim is getting his players firing on home turf again after Premier League draws with Sp*rs and Middlesbrough.

“I read this morning that Real Madrid are not sure whether it’s good to finish first or second,” he told his pre-game press conference.

“The problem is that if you finish second and get a bad draw, everybody says, ‘that’s your fault’.

“You want to finish first, knowing that. Is there an actual difference? I don’t know in a group of Real Madrid or Dortmund. The other groups might look at ours and think, ‘Paris Saint Germain or Arsenal – who is better? I don’t know’.

“But we want to finish first because we want to win the game. I think more than speculating, it’s more important for us to do the job. When you play at home against a big team, you want to win.

“When I tell you that we have been a bit stuttering recently, we played Tottenham, were 1-0 up and didn’t win the game, so we need to show that we can do that.”

PSG proved difficult opponents at the Parc des Princes in September squandering a host of chances to extend the early lead given to them by Edinson Cavani. Alexis Sanchez’s late strike saw the Gunners escape with a point but Wenger knows his players must cope better with the style of football played by Unai Emery’s side.

“I think we want to show that we can beat any style of team. That’s what we have done since the start of the season. We play a team with a different style, a team who play possession, slow and quick.

“We have to show that we can cope with that because they play a lot of possession and then suddenly they play quick with Cavani, Lucas Moura, they can accelerate a game. We have to show we can deal with that style, a different style to what we are used to. In England, we always play with power.”

For me finishing 2nd or 1st doesn’t really make much difference. I am just so bored of playing either Bayern or Barcelona. In cup competitions you have to play the top sides eventually but I just really struggle to get excited when we play the tax dodgers or Munich as we’ve played them so many times after the last few seasons. What we are also forgetting to mention is this UCL draw is so fixed anyway – so it doesn’t really matter.

Arsenal hopefully win you mean…..I could not give a toss what the score will be as long as it’s in our favour…

We all remember too well how we previously topped group, got Monaco and the rest is history…

Clearly the team did not rock up against them last time or at ManU last week, but we still managed to grab an undeserved point in both matches.

Win would be nice but I’d take a draw with a decent team performance.

We didn’t top the group when we got monaco we were 2nd in the table. But not that one thing is who you get big or lesser team as 2nd in the table, but the issue with aresnal is we are finishing second in years and we got teams like barca bayern etc but even when we got monaco we bottle it so for me finishing first is most important because you play the first leg away, and even if you don’t play good like we didn’t played at psg you can score one goal and the game finishes 1-1… Read more »

Why not
Reply to  GunnerDareMACEDONIA

I don’t like the rhetoric that champions league success is dependant on the draws. Which makes the whole argument a farce really. You want to top the group because you want to win the competition and win all the games. The draw as proven in recent years for 1st and 2nd isnt decisive.

You have to beat teams of quality in this competition. It is the whole point.

Bould's Eyeliner
Reply to  Why not

I think there’s some truth to both of what you guys are saying and it boils down to the fact that the away-goals system is a flawed concept, a rule that was made to make things more fair, but somehow made things less so. But really, I do believe playing away first does have an impact, but not because of the ‘security of a draw’. That’s the gambler’s mentality, how to continue to look for odds when the situation looks slim. The players have one goal in mind: “win”. What their head is filled with is the things they need… Read more »

Anyone else watch Monaco v Sp-rs last night?
I couldn’t stop laughing when Monaco scored 40 seconds after Sp-rs equalised.
They really are shit!

Start with Giroud up front and rest Sanchez. Let’s show everyone what we’re capable of!

Literally from the kick off, after the Sp*rs shit goal. Couldn’t believe my eyes. Actually I could. That’s why they’re shit. Fucking gold.

It’s worth coming first just to avoid barca. Seriously I am so sick of that mob. Even on the rare occasion when we seem to be beating them the ref fucks it up for us.

Yeah I agree. CL refs are horribly biased towards Barcelona and frequently buy (or overlook) their frequent diving and cheating.

Personally, if we get drawn against one of the big boys, it would be nice if it weren’t Barca/Bayern for a change. We’ve faced one of those two almost every season for about seven or eight years now.

The odds are we might get a team weaker than ours in the 2nd round if we top our group. Once you get into the quarters, it could be anybody’s game because luck is a huge part in CL. The consistency factor is far less punishing in CL than in PL, one good game and you could be in the semis

Different issue. But who else would agree that the current Monaco manager could be the one that follows Wenger at Arsenal. Great team, great footbal eye for talent and when to sell them (Martial). I think he would fit right in. Anyone?

Monaco looking good. Wenger’s old team. And they just mashed up the Spuds. We could do a lot worse.

Umery dont really have A specific style, he is more of a modern manager who looks to neutralize your threats and exploit your weaknesses. Adaptation is the name of the game and that is how he won the Europa League 3 years straight with Sevilla. So whatever style he reckons will ruin our day is what he will bring. Arsenal is pretty easy to read cause everyone and their grandmother knows how Arsene Wenger will be approaching the game, the same way he approach any other game. Allthough he has modernized himself a little bit in recent years like that… Read more »

I hink we have tries to play the “non-Arsenal” way in many games, it is just in those games it worked really well. Against united now we were set up like a mourinho team, it just didn’t work out too well.

Hate to say it but think we will lose. Have gone off the boil a bit recently.

Hope we don’t of course.

In general l think Ozil needs to be rotated with Ramsey. Ozil has gone off the boil and l feel Ramsey could make an impact against PSG. lt also wouldn’t do any harm to send the message that no one is reproach.

We have a fundamental weakness whereby our style of play doesn’t consistently lead us to beat teams that are better than us and this is without factoring in our psychological weaknesses. This might sound obvious but our style more than others relies on the quality of our players not the quality of our tactics, so against team with better players, we very rarely win. You just have to look at our shocking record over the last 10 years against the likes of Chelsea, Man Utd, Barcelona and Bayern, although we’ve had the odd win we’ve also conceded 4/5+ goals in… Read more »

i dont think we can beat Gangnam style, if thats what PSG go for.

“against team with better players, we very rarely win.” Well yeah, is there any team who beat teams with better players consistently? Maybe Athletico but they have some really good players themselves. Leicester did it for one season. It usually requires pretty defensive football and counter attacking. That is pretty much how Wenger has set up his teams the last 2-3 years against the best teams.

Was meant as a reply to John C…

Dortmund is another team that does it, we should be at least as consistent against the top teams as they are and Atletico but we’re not, our record is much worse.