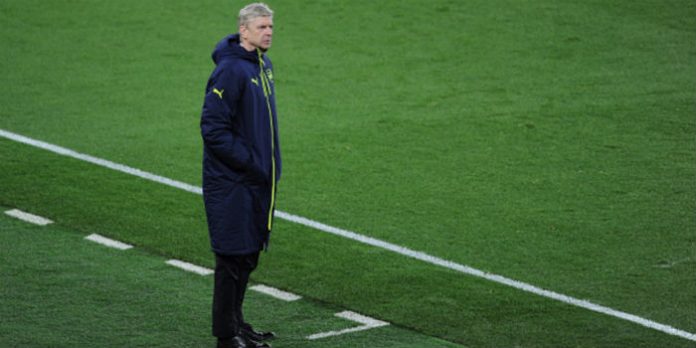 Arsene Wenger says he can’t understand how Arsenal gave PSG such an easy equaliser as the Gunners squandered the chance to finish top of their Champions League group.

Edison Cavani put the visitors ahead on 18 minutes before Olivier Giroud converted from the spot after Alexis was fouled in first half stoppage time. Wenger’s men showed more authority after the break and took the lead when Marco Verratti put through his own net on the hour mark only for momentum to be scuppered by Alex Iwobi’s own goal.

After the game, Wenger admitted that his side didn’t play well enough for the full game to merit victory. Asked if he was disappointed by the draw – a result that puts PSG in the driving seat to win Group A – Wenger told BT Sport:

“I think you have to consider two things; the intensity we put in and the result I believe on the intensity front we gave a lot tonight. Overall, the most difficult thing is to be one goal down and to come back and lead 2-1.

“To give an own goal on the second goal is disappointing but we played against a good side. I felt we had good periods in the game but we were not technically fluent enough not for 90 minutes to dominate our subject.”

He added: “My concern tonight is that we were 2-1 up and did not continue to maintain the pressure on them. We allowed them to come back at us. It’s difficult to understand how easily we gave a goal away at a corner.

“Athe moment we lack something in our creativity. There’s still a great spirit in the squad and we got a point. It certainly will not be enough, but you never know.

“As I said before the game, let’s try and finish the job well and win the game [against Basle].”

Ultimately I think we’ve been lucky to keep our unbeaten run going over the last few games. Onwards and upwards!

Tusk
Reply to  A Gorilla

Not unlike 12 years ago when we made history.

Charmin_Tas
Reply to  A Gorilla

HOw come we are 2nd… we have scored more goals haven’t we?

Against the head results. Over the two games, PSG beat us on away goals. 3-3, but hey scored two away goals to our one.

Head to head vs PSG, they have scored more on our home ground. Was 1-1 in Paris and 2-2 last night.

Away goals count in the group matches too as if this was a 2 leg game we would be out.

Doesn’t make a lot of sense to me either, but then I suppose I’d say the opposite if the scorelines in the fixtures was reversed.

Ahh, November. There you are.

As Novembers go, no defeats isnt so bad.

We will have to beat some big teams to win it so it makes little difference to me when we play them.

Could have cost the club a few million in winnings though.

Arsene – you should be more fckn frustrated by your poor team selection for second game running.

Both their goals could have been avoided by Jenkinson having better positioning. I love the lad, but he isn’t arsenal quality.

Agreed. I thought mustafi’s frustrated gesturing for him to move into space before half time and Alexis’s refusal to pass to him just after were telling of the confidence of his team mates as well

Cazorla and Bellerin are key to this 4-3-3 system. Without them, I would like to see something else. Thought this might work in the same formation as Chelsea:
Cech
Mustafi Kos Monreal
Ox Gibbs
Xhaka Coquelin
Özil Walcott
Alexis

Yeah gets a little found out at the top level. I’ve seen him have good games against top teams though, Bayern in particular comes to mind. Maybe needs a run of games in the first team before we can see if he can improve.

He was out for a long time so his development stalled somewhat. He is still a very good player, but when your used to Bellerin, a back up to him, is always going to feel like a back up.

Even with his faults last night, still preferred having him out there than say, Debuchy.

Seriously? Is no one else seeing how badly Iwobi handled that header? Their equaliser was his fault.

Yea, Iwobi’s attempted header on the shot was pretty poor, but it’s easier to push the blame onto Carl because everyone has been so impressed with Iwobi.

Fact is, and Alex has said himself, defending is an area he needs to improve upon, including the basics. He would do well to look at what Gibbs does in relation to positioning on the line and how he clears, probably, along with Koscielny, the best goal line clearer at the club!

Arsen Wenger should also be prostrated for not doing his usual substation on 65minute..why did he allowed Iwobi and Coq to continued playing until 77min?

With the immobility of Giroud,
with a totally exhausted Alexis (not to mention our endless 70th minute sustitutions)
and without Santi in the middle…
our fluency won’t come back anytime soon – i’m afraid…

Only wish the substitutions had come 5 minutes earlier

We say immobility of giroud. But we scored both our goals because of his pressing

PSG were better than us on the night. Looked much fitter and quicker especially in midfield. The Coq was overrun and Ramsey was lost when it came to defending. Lost that battle plus they were so quick in atack. We are nit playing well at moment but at least we got a point. Much improvement needed

“On the intensity front we gave a lot tonight” yes he really did say that. Gibbs “we deserved more” and the worrying thing, is that they believe that! A question, would Klopp for example have considered that performance and “intensity” was enough? sigh. Different season, same shit! As for the creativity, the only player who could play the Santi role, is at Bournemouth.

What could have been had Giroud not been wrongly flagged for offside. Get a goal there (no guarantee obviously but I like his chances) and the game is killed off. Oh well, on to the next.

Comment: I REALLY ENJOYED THE SECOND HELF COMONG BACK. THE TEAM PLAIED VERY WELL IN THE IN THE SECOND HELF, BUT SOONER THEY WERE LEADING, THEY GOT RELAXED. BUT ANY HOW, MY THUMP UP FOR THEM AL THE WAY.

I think the result is down to tactics and selection. With Giroud as the CF, the team cannot seem to press and therefore the initiative is handed to PSG. Also, the intensity at the start was missing and I think this was due to us playing Giroud up front. I think Giroud is a good plan B to cone on later in the match. As plan A, he does not frighten defenders with his movements and pace. He should only start in games where we will dominate possession. If you play Giroud, then you need two wide men who will… Read more »

Comment: I REALLY ENJOYED THE SECOND HELF COMINGG BACK. THE TEAM PLAIED VERY WELL IN THE IN THE SECOND HELF, BUT SOONER THEY WERE LEADING, THEY GOT RELAXED. BUT ANY HOW, MY THUMP UP FOR THEM AL THE WAY.

Somehow I called a draw before the game. NOvember seems to be a month for draws for us this time round. We may still top the group yet depending on last game but how they can decide to go to head to head when both were draws instead of goal differential baffles me. Still, either first or second is no guarantee of not meeting a big team. Madrid and Bayern may be lurking for the top spot. What really frustrates me today is you could see us slacking off after the second goal. Be as it may fatique from the… Read more »

Manager, fans and players all frustrated then. The remedy is simple enough – beat Bournemouth and Soton and march cheerfully into December. You know it makes sense 🙂

I think Wenger cost us the game. He should have made the changes long before he did. Her needed to strengthen the side or perhaps inject energy into the sagging squad. The pressure was visible yet he sat back. He’s just a crap coach. Don’t blame the lads.

Except for brief periods in the second half our intensity was well below par. Let’s not kid ourselves, that was an uninspired and lazy effort. How do we manage to get utterly owned by some teams? Hopeless – no plan, no outlets, no decisiveness.

It doesn’t matter who we play in the last 16 because we have a much better first team now. We have enough skill and spirit to beat a Luis Enrique Barca or a Zidane Real. Let’s stay behind the team till the end of the run, hopefully June! Forward!!

The only one to blame for Iwobi’s own goal is Wenger himself. Why the hell do you wait 70+ minutes to make a defensive substitute when we’re leading 2-1? The game was crying out for Xhaxa to come in instead of Iwobi and help tighten up our midfield and bring on a fresh leg. I don’t blame Iwobi one bit for the own goal, he shouldn’t have been on the pitch at that moment in the first place. It’s all on Wenger.

i feel Arsenal are doing well on all fronts as a team except for conceding sloppy goals and also the lack of creativity is a real concern we haven’t been able to create a decent number of chances over the last two games.. But overall the team is much more resilient and stronger compared to last season as reflected in the unbeaten run.

I agree. We’re doing everything well apart from not scoring enough goals and conceding too many.

Not much to work on, then.