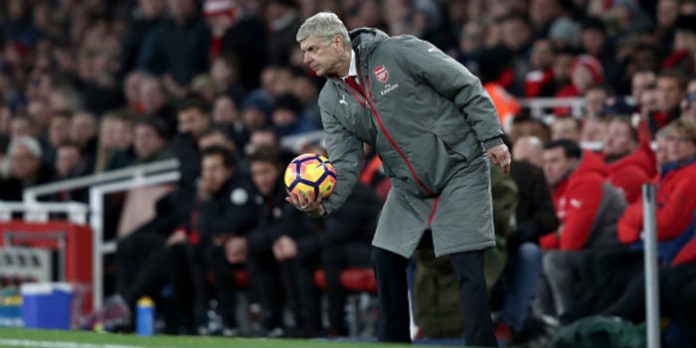 Arsene Wenger says Arsenal became nervous after conceding a soft penalty to Bournemouth but fought back well to secure their first league win of November.

“My view is that we should have had a penalty for a foul on Alexis, and that the penalty which was given [against us] was a very soft one,” said the boss after the game. It was a shoulder-to-shoulder challenge and I was really amazed that he gave a penalty.

“It was a shoulder-to-shoulder challenge and I was really amazed that he gave a penalty.

“From that moment on, we became nervous and they suddenly because more dynamic going forward. We lost some balls and put ourselves in trouble. We had to calm down at half-time and just focus on the game.”

Having made seven changes from the side that drew with Paris Saint Germain on Wednesday, the boss also took a moment to highlight the strength in depth at his disposal.

“It’s as well the first time I made seven changes compared to Wednesday night. When you go in the Premier League, I think it’s a long time since I have done that, to change seven players, keeper included to go from a Champions League game into a Premier League game. That’s why I have top-quality players on the bench.”

In addition to the changes to the starting XI the boss was also forced to field Gabriel at right-back when Mathieu Debuchy, a late replacement at right-back for Carl Jenkinson, went off injured.

It was an experiment that looked uncomfortable at first before the Brazilian grew in stature.

“When I picked the squad I imagined that something could happen to Debuchy,” reflected Wenger.

“I had Francis Coquelin ready to play right back as well because he can play there, but I went for Gabriel because he’s a defender and is very quick. He adapted well. I watched tapes of him playing full back at Villarreal. On two or three occasions he played at left back and I found just one tape of him playing at right back. He was playing in Brazil and I must say that it was not super convincing, but today he did well.”

Wait, what happened to Jenkinson?

the late shoulder charge which alex won was fair too, stupid ref

that guy angled to hit Sanchez on that one! Can’t believe some of the decisions by the ref.

3 points and November’s over!

“I found just one tape of him playing at right back. He was playing in Brazil and I must say that it was not super convincing, but today he did well.”

I don’t know if it’s just me, but I found this very funny.
That being said, I think he really grew into the game though I was worried when I saw him coming on. Took a lovely cynical booking near the end as well.

Was just going to comment that, thought it was hilarious

And tried to convince the ref the bloke had taken a dive.

I would love to see Wenger’s tape collection

It’d be full of amateur, under-21, European, Asian, Brazilian, African, and starlets from Southampton. Plus some French unknowns.

Was Jenkinson injured for today? A shame for Debuchy his time at Arsenal has been a nightmare. What is it with the Emirates and penalties for them and not for us?

‘Was not super convincing’ Good job AW. Was going to flop out the Coq but opted for Gab instead. Thats why he gets paid the big $$$ to manage and I pay $ to give it a crack in FIFA.

You’re paid to play FIFA?! You, sir, are living the dream!

I have to say, I’m not debuchys greatest fan but I thought he came on with a point to prove today and played with a spark. Sad to see him limp off

“We lost some balls”

Surprising to hear Wenger be that straight-talking.

Except for 2, 3, 4 all booked for late challenges that were last seen in 1978. And Gosling sliding in studs up on Nacho.

3 points was important, the ref was poor and the guys did well in the 2nd half.

Wow, what a performance! Up there with the Dean’s, Taylor’s and Mike Riley’s. What’s significantly worse is the media spin, that Bournemouth were the aggrieved party. Stellar performances from Lolo, Sanchez, Granit & Mr Duracell Elneny! What a motor!

Mourinho should accept tutelage from Wenger because we won, we keep on winning.. we will never stop winning. Man U, keep on losing then occasionally, they will get a draw.

And dumbass got sent to the stands for his antics. Again!

It is hilarious what’s happening up the road from me at OT. Loving watching them trudge back to their cars idiotically parked all over the pavements on my road.
And Moanio’s fall from grace is a thing of beauty.
BUT. Don’t we think it’s a bit ridiculous getting sent off for kicking a bottle when something frustrating happens. Lest we forget AW got sent to the stands at OT a few years back for the very same when the Skunk had an equalising goal ruled out for offside in the dying minutes.

Tbh i thought Debuchy did very well for 15mins of his game time before he got injured. Such a pity. And now the Xhaneny and Coqzorla partnership which one do you guys prefer xD

I thought Xhaka and Elneny were completely outplayed in that first half by their Bournemouth counterparts.

“We had to calm down at half-time and just focus on the game.”
Dear god what were they focused on before that, Jordon Ibe’s bloated balloon-face? I certainly was, but I hope they weren’t as it would detract from their ability to do what they get paid for (which in fairness seems to be what happened for a while there).

Make mine a Swiss miss
Reply to  Ebo

That Wenger comment about watching tapes of Gabriel playing full back at Valencia and Brazil just intensifies my notion that Wenger is a guy absolutely and irrevocably in love with the game. He’s living the dream for us all. Love it.

Let Wenger pass instruction from the technical area that :
1/Arsenal players should close-mark their opponents
2/they play for each other by double -marking opponents while in dangerous positions
These were done in 2006 in the Champions League with young players and make-shift defense with Flamini at left back until the final when Ashley Cole came in .We eliminated Juventus and Real Madrid while we kept clean sheets in the proces.
Mr. Wenger, watch the films of these matches ,copy your match plans of 2006 and Arsenal will become a winning team in England and Europe.

1)Debuchy. Arse luck. Before it was an issue of commitment more than anything-else. Now that he is commited to doing something with the remainder of the time on hand at the club, it’s an injury issue. I thought the few minutes he was on, he showed a much more technical and creative player to Jenkinson. I said, he would be very useful over the limited Jenko. Pity the injury. 2)Gabriel. Preferred to Jenko. Presumably Jenko will be used in midweek. BUt the Brazilian also looks (when he settled) a better bet to Jenko. He is more comfortable on the ball… Read more »