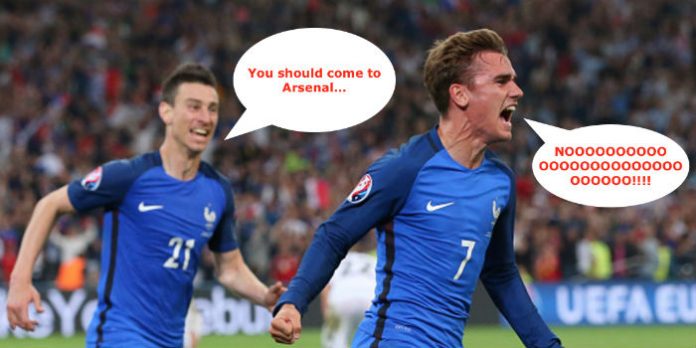 He may have suffered domestic and international heartbreak in the finals of the Champions League and European Championship, but it’s fair to say it’s been a pretty decent year for France international Antoine Griezmann.

The Atletico Madrid attacker recently came third behind Messi and Ronaldo in the Ballon d’Or and was today crowned France Football’s French Player of the Year for 2016.

In an interview granted to the magazine that bestowed him with his latest honour the 25-year-old answered questions from his peers…and that’s where this becomes ‘relevant’ to Arsenal.

Laurent Koscielny, who played alongside Griezmann as France reached the final of EURO 2016 in Paris, took the opportunity to cheekily ask if he fancies a move to the Emirates.

Here’s what Kos said (translated by Get French Football News): “If you want to discover a new league, why not do it at Arsenal with us?”

“If you want to discover a new league, why not do it at Arsenal with us?”

Alas, before you head to the Armoury to have Griezmann’s name put on your replica shirt, here’s what he replied:

“For Arsenal, he speaks to me about them often. But I feel good at Madrid. I do not want to leave. I feel calm here. The little one (baby girl) has just arrived, I am playing matches, I feel good. Sorry, I am going to stay. But Arsenal is a wonderful team. They play great with the ball.”

We’ll assume Antoine didn’t watch us on Sunday, otherwise, he’d have been well within his rights to answer:

Oohhhhh what a cheeky article, now let me return back to the shadows with this cheesecake ?

Right behind you sir. It’s a nice change from the cold ink soup served in the shadows

Considering how often we’ve heard our players give out such nice sayings and still left I’m holding…. nah I’m not even believing it myself. Anyway.

Wenger wouldn’t play him for two months, then put him out on the wing, substitute him after 70mins and tell him top four is what it’s all about.
Wenger out.

Why has it taken 3 seasons to give him a run up front?
He’ll be off to another club….for sure.
I think Sanchez thinks his team mates aren’t up to it.
….and his manager.

Because the times he was used there in previous seasons didn’t look like he was comfortable or wanted to be leading the line.

Wenger out, welcome back. I hope exile wasn’t too boring for the last few months…

We were just waiting for the inevitable. And as expected, it’s arrived in epic style. Welcome back to reality, I hope you enjoyed the last few months in dream land.

I know we all feel like Tottenham (aka sh*t) at the moment, and I am #WengerOut, but Wenger is here until at least the end of the season, and internal conflict within the fanbase will not help us at all. We need to stay united and support the team as much as possible. If Chelsea can turn their situation around from their dismal start to the season, I don’t see why we can’t turn things around. After all it is not even half way past the season. 9 points is not as unassailable as it seems. If you look at… Read more »

Thats the big question though Dan – do we really want it? are the players really prepared to leave everything out on the pitch to win the title? I think they are all very well trained in the PR guff nowadays so in the post match interviews they can say all the stuff that they think we should hear ‘Yes, we believe we can win the title’ or ‘we have great mental strength’ .. for me, they just sound like they’re reading from a script, nothing is heart felt, there is no genuine belief in those statements. And that’s why… Read more »

Other than a handful of players, the rest of the team seems to be in this comfort zone you refer to. From what past players have said, Wenger leaves things to the players to figure out. He gives them the responsibility of figuring out their weaknesses and making amends. It is all well and good when you are talking about the likes of Henry, Pires, Ljungberg and Bergkamp, all geniuses and highly self motivated, but when you have players who are not so motivated or who do not believe in themselves as much as their manager, then you are left… Read more »

It would be very misleading to compare their points to ours at the end of January (as those games will already be played in the 2 half of the season). It will be the match on 1st of January after that we will have a quite objective picture.

The Wenger outs seem to shut up until we lose a game or two. They had to wait a while.

True or false? This exact same thing happens every year. True. So what is the issue with saying Wenger out? Somebody please enlighten me.

Do we really have to go there? How tedious. Wenger’s not going anywhere right now so no point loaning about him

The problem is that those that are vocal about wanting Wenger out are only actually vocal once we lose. You never hear from them while we’re winning

gooner of Oz
Reply to  Pardews Peaches and Plum Emporium

To be fair people defend Wenger even when we lose and even after we finish another failed season so what would you think your respond is if someone said that (we’ll fail to win the title for another year with Wenger) after a win or when we are temporarily on top of table? Be reasonable fellow gooner. Perspective.

That is a very simplistic understanding. I believe Wenger should go, even if we are on a winning run at the time, because it is not about 1 year or 2. It is about 12 years of relative mediocrity. I am not just talking about results but about the effort of the players. I would be more than satisfied if I could say we gave everything we had but we came up short. However, I don’t think we did give everything on the pitch. I believe that is down to the manager. I believe he accepts mediocrity and he is… Read more »

Yeah but we have not been that good this year, same as always, and terrible against the top of the table. We’ve won 1 out of 5 against the top six, and 3 out of 8 against the top ten. I don’t know if I would include Westbrom in that list of upcoming easy fixtures, they are playing well and their league position places them among the teams we can’t beat. Wenger’s time is up 1 Chelsea Won 2 Liverpool Lost 3 Manchester City Lost 4 Arsenal 5 Tottenham Hotspur Draw 6 Manchester United Draw 7 Southampton Won 8 West… Read more »

You know, for praising Johnny Nic’s article this morning and promoting the fact that Arseblog tries to revert from clickbait journalism… this really doesn’t help. 😀

To be fair, the headline and the picture warned you not to take it seriously…

Quiet day, we all have needs 🙂

…clickbait you say? Griezmann tempted by ‘wonderful’ Arsenal Arsene Wenger is ready to answer Antoine Griezmann’s come-and-get-me-plea after the France international admitted that Arsenal are ‘wonderful’. The 25-year-old has a long-term contract at Atletico Madrid but the Gunners are ready to test Diego Simeone’s resolve with a huge January offer and are already using compatriot Laurent Koscielny to smooth personal terms. Speaking to France Football, Griezmann said: “Arsenal is a wonderful team. They play great with the ball.” He added: “Koscielny speaks to me about them often.” Stan Kroenke is understood to have sanctioned the move by handing Wenger a… Read more »

I wish I could like this a thousand times. You should work for the Daily Mail blogs ?

Make mine a Swiss miss
Reply to  Lord Alfred

That sounds like something to say to a naughty child “if you don’t eat all your carrots, you’ll have to work for the Daily Fail”

I’ve been trying to click, there’s no hyperlink… News Hound OUT!

Hats off to you Mr. Bloggs, I don’t know why you bother sometimes, we can be a miserable and ungrateful bunch at times.

We want the dog photos NOW.

That was most enjoyable, News Hound.

Oh please print the pictures. I love dogs. It would make my Christmas.

“Griezmann was asked about his favourite German players by Reviersport and opted for the former Real Madrid star [Mesut].
“He’s an outstanding player,” he said. “I rate his style of play, his passing quality and also that he always finds a solution with a long ball or a dribbling. He’s elegant with the ball.”

We will have done well to keep hold of Sanchez let alone convince Griezmann to join us.

We have no chance of getting Griezmann currently but there are players that are unsettled and willing to move come January.
Icardi, Draxler, Rodriguez would all improve this team. Need to improve this squad further, start replacing the inconsistent players i.e. Walcott

I careless about playing personnel as long as Wenger is still in charge….give him MSN and he still won’t win major honors

I don’t know, MSN was quite a big deal 10 years ago. He could probably make it a big deal again with the right advertising campaign

Where we are lacking at the moment is midfield Start of season we looked like we had plenty of options and Wenger conspired to accede to Jack’s wish to go out on loan But with the little maestro Santi injured, we are left with Coquelin and Granite They are very good players but the partnership needs time to completely developed That said, I felt we were swamped in minfield print Cup ally because Coquelin was poor and did not look right following a knock sustained in first half. Also Ozil did not pull his weight Iwobi was also concern with… Read more »

Swap him for Maitland Niles at Bourne mouth

Ramsey should interchange with Ozil. He is better at taking the final third

Jack can play some of the Santi role for us, he has the technical qualities.

Plus he has fight in him.

Yeah we play great with the ball. Keyword is “with”.

He didnt say NO to playing at Arsenal though. Just that he is staying at AM.
So thats a positive. Right?

Separate note: Perez scored a champion’s league hattrick and hasn’t been in the team since. Any normal manager would at least try to build on his confidence and play him more (starting him or as a sub) rather than waiting till all his confidence is gone again before fielding him in the team. Apart from Wenger’s constant late substitutions he isn’t using form well enough to dictate who starts and who stays on. Xhaka the whole world knew should have been starting long before he cemented his place for example. Thanks for the memories Arsene – even if he wins… Read more »

Wenger should have signed Griezmann from Real Sociedad that time when there was talk of Carlos Vela,s buy back clause,he was brilliant back then, had a great partnership with Vela.Instead Athletico Madrid got him for €30,000,Peanuts.

Wenger should have signed Griezmann from Real Sociedad that time when there was talk of Carlos Vela,s buy back clause,he was brilliant even back then, had a great partnership with Vela.Instead Athletico Madrid got him for €30,000,Peanuts.