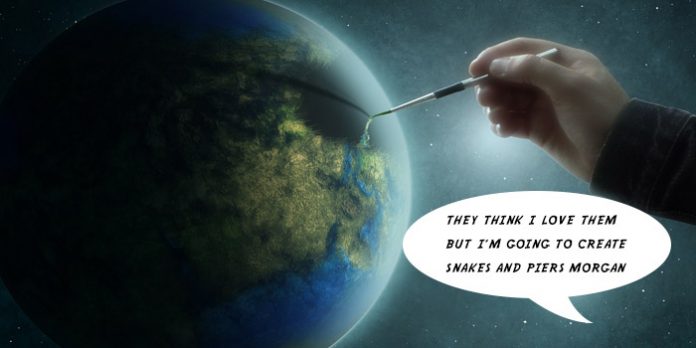 Arsene Wenger went all biblical in his reaction to Arsenal drawing Bayern Munich in the Champions League for seven-hundredth time in the last four years.

The Arsenal manager has seen his team come close against the Bundesliga giants – in particular in 2014 when they went out on away goals despite a 2-0 win in Munich – and is looking to finally do them over.

Speaking to Arsenal Player, he said, “They said they made the world in seven days, this is the seventh day for us, so we have to get a special day!

“Many times we were in a position where we played at home and we wanted to make the difference and after 10 minutes we conceded a goal and after you think already, ‘Oh no’.

“This time the advantage is that we play first away from home. If we can keep our strength away from home that can help us – let’s have a good first game then we can finish the job at home.

“We are all here to change history and to make history so we have to change what happened before. And make it better.”

Fingers crossed that can happen, and despite Wenger appearing to channel the book of Genesis – which eventually leads to the book of Phil Collins who we all know is history’s greatest monster – it’s worth pointing out on the 7th day God had a rest, went down the pub for a carvery lunch and a couple of pints.

Then someone put ‘In the air tonight’ on the jukebox and God did smite him with his mighty shaft.

Won’t be that special anymore if we continue playing the way we are. Let’s do this! COYG!

Tough but a better chance than for a long time.

And thus it came to pass that Arsenal qualified for the quarter finals, and the Lord said “it is good”.

To use pundit speak, we need to learn to “compete”. it’s a 180 minutes game

We need to score in Germany, that should be our main priority. Losing, as long as it’s by a tight margin, is ok, providing we score.

Good thing is even we are unable to beat them we can concentrate on the league which I believe we have a real shot at, and if we win then awesome, no point lamenting our luck, if we have to win CL we have to face strong teams, no point being in a competition if not to win it

WE WILL CRUSH ZE GERMANS!!!! Bob lewandosknuts can cram a banana in his tail pipe. And Arsehole Robben can cry his way home since we’ll beat them at home, steal their bus (and plane), and make them walk to the emirates.

Not related even one bit (except it’s to do with, you know, Arsenal) but I just realised Francis Coquelin has *still* not been capped by the senior French national team. How is this possible?

No Girl can truly love a man who listens to Phil Collins.