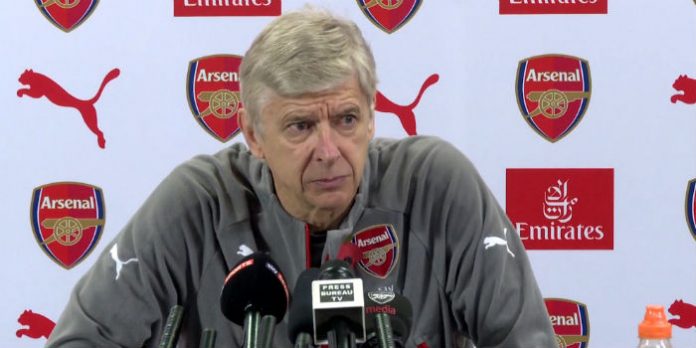 Arsene Wenger says he’s dubious that proposals aired this week for a 48 team World Cup are designed for the good of the game.

FIFA have suggested that the 2026 tournament could be made of up sixteen groups of three teams, in what seems like one of their classic ‘How can we make more money?’ decisions.

Asked about it on Thursday, the Arsenal manager seemed sceptical that the idea would benefit football in any way.

“I’m a bit sceptical, but if somebody can convince me that it will make football better and that we can live with the time it will take to complete the World Cup, I am ready to listen.

“At the moment, I am not convinced. We have moved to 24 teams in Europe, that’s basically 50 per cent of the teams we have in Europe.

“I can’t see that being a huge improvement on the quality of the game. But 48 teams, we have about 300 teams in the world, the percentage looks that it could be accepted.”

And Wenger was keen to see qualifying in Europe updated.

“The qualifying in Europe has to be changed already,” he said. “You look at the percentage of wins of the big countries in the qualifiers.

“They go to the big tournaments with 90 per cent wins and then the competition starts.

“The qualifiers are outdated, the way the competitions are organised now and we have to rethink the process because of the number of games the players play that have really no meaning.”

Criticizing FIFA? There go our chances of winning any silverware this year

At the same time.

Wenger has right to say what he thinks, what has it got to do with silverware 2014 we had FA and Shield 2015 we had FA , Shield, Emirates cup, and Asian cup, that’s normal

Wenger breathes football.
Hard to believe we have some fans who will want this man to go. Wankers they are

not wankers, they just have whats called a different opinion.

Convinced that Wenger should join some kind of football governing body after Arsenal. Ain’t called le prof for no good reason.

Dislike anything international, but maybe that’s cause my countries slightly rubbish at the mo ? probably find this format would help. But theres nothing like a good group stage..

It never ceases to amaze how many right cunts manage to weasel their way into the top echelons of football. Infantino is just as much of a barmy, corrupt fucktard as the previous shit bag. Nothing ever changes. It’s time for the US justice department to destroy FIFs once and for all.

God help us if FIFA or UEFA get hold of the FA Cup – group stages to confirm that PL teams are better than National League South? 512 clubs go into 128 qualifying groups: Exciting draw taking 3 days gives us
Group A – Arsenal/Sheffield Wed/Exeter/Hungerford
Top 2 to qualify, 3rd place onto EFL Trophy.
Infantino comes up on my spellchecker as Infantile – about right I reckon.

Maybe true today, but for him, how sweet was the fealing of winning France 98s World Cup?