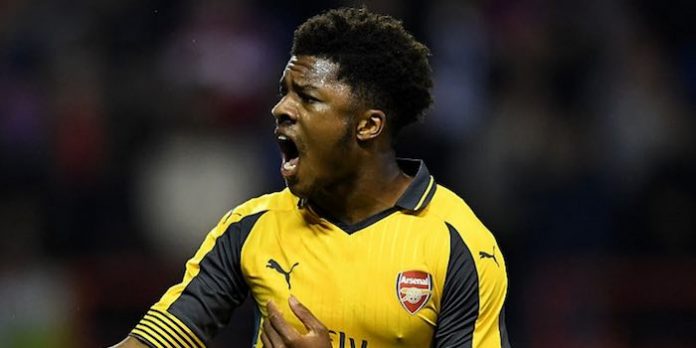 Chuba Akpom will spend the rest of the season on loan with Brighton as they look to secure automatic promotion to the Premier League.

After impressing in pre-season, Arsene Wenger opted to keep the England under-21 international at the Emirates as back-up while Lucas Perez settled into his new surroundings and Olivier Giroud worked his way back to fitness.

Speaking about the deal, Brighton boss Chris Hughton said: “He is a young talent who gained valuable experience with Hull in the Championship last season, will give us really good pace in the forward areas and complement the other strikers at the club.

“We fought off competition from other clubs to sign Chuba, and we would like to thank Arsenal for the opportunity of working with him for the rest of the season.”

The young striker subsequently started and played well in the 4-0 EFL Cup win over Nottingham Forest but then picked up a back injury that kept him sidelined until an appearance for Steve Gatting’s under-23s last week.

Akpom spent last season on loan at Hull City so he’s well aware of what is expected of him in the Championship. Brighton are currently top of the table, two points ahead of Newcastle United. Aston Villa were also reportedly keen on his signature.

Arseblog News wishes him the best of luck.

Good one for the lad. I hope strongly that he gets enough games and behaves himself.

There was a young man named Akpom,

Hmmm.. Nope not going to happen.

Good luck to him

Great move for him. With all our attacking talent at the moment, it’s hard to see a way for him into the first team.

Good test for him.

Brighton are a decent footballing side, and going for promotion, so if he can get a good amount of game time going into that situation, he’ll prove himself a little bit more.

Good move, chance to be part of a promotion/title winning side. Will be pressure on his performances and professionalism.
Could be the making of him.

As a supporter of both Arsenal and Brighton ( Dad’s family, including myself from Brighton, mum’s side all north London Arsenal) I couldn’t be happier with this deal. Hopefully he can give the Seagulls the extra impetus they need to carry on this remarkable promotion chase, then come back to Arsenal ready to fight for his place in the 1st team.

I’d like to see him do well, get promoted with Brighton, stay with them for another year and get regular game time in the Premier league, then return as 2nd/3rd option as, in 18 months, Giroud will be waning with age and a squad space will be open.

It doesn’t really ever work like that. Also, Giroud’s attributes will allow him to go on until he’s 33-34 at the same level. He’s never relied on pace.

Hope not. Benzema’s a total dicksplash.

I think akpom attitude is holding him back,he needs to keep his head down and work hard,he is a talented boy who should learn he cant play every game ,and when hes taken off its for the good of the team..

Incase he will play for us again in the future 😉

Anyways, this just randomly crossed my mind, Now Back to my original thought which was just to say Good Luck to the lad.

Welcome to Brighton Mr Akpom. If I see you out and about I’ll buy you an ice cream and a ride on the pier rollercoaster. No money for the claw machine though. They’re fixed.