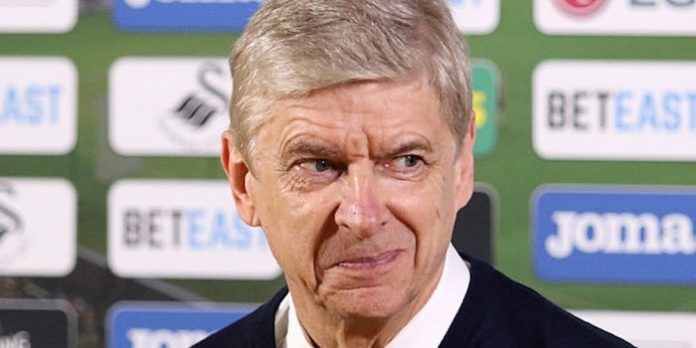 Arsene Wenger says his current stock of forwards is the best he’s had in his twenty one years at the club.

Certainly he has had better individuals, but when it comes to having depth and players who have end-product, it’s not an unreasonable thing to say.

The Frenchman has Alexis Sanchez, Mesut Ozil, Lucas Perez, Theo Walcott, Olivier Giroud, Danny Welbeck, Alex Oxlade-Chamberlain, and Alex Iwobi at his disposal to fill that front four, and with all them chipping in with goals and assists, he’s impressed by his options.

Asked if it was the best selection he’s ever had, the Arsenal manager said, “I think certainly numbers-wise and quality-wise together.

We’ve never had so many players who could perform and score goals – certainly never. Dennis and Thierry had the quality but that didn’t mean we had a large number of options to choose from.”

Of course the key issue is keeping those players happy, so many men into a limited amount of football may cause some unhappiness, but it’s a good problem for him to have.

“You just try to be honest in your decision and keep everybody on board. It is important to stay in all the competitions because, if you have one game every week and you have several strikers, good luck keeping them happy!

It is impossible because they all get annoyed but they have a different way of showing it. They are all committed to the club, though.”

It’s definitely the kind of problem we’d rather he had, than trying to figure out how to fill the gaps, and there’s no question the competition in the squad is playing a part too.

A bit strange that he’s forgotten to mention Ramsey. Or Wilshere. Or Cazorla. Just putting it out there. They’re attacking options primarily, before someone argues “Defensive mid, man”. But seriously, we’ve got a monster of a squad!

They’re attacking midfielders and he was asked about forwards, so nothing strange about it at all (especially as Wilshere is on loan and Santi is a long term injury).
If they’d asked about attacking options rather than forwards, then I’m sure he’d have mentioned more names.

Does anyone know if Perez can play in the middle at all?

Slightly off topic, but I’m really looking forward to watching the Ox put in some more good performances in central midfield against non-big-game opposition (but still competitive– thinking of FA cup quarters and semis and Premier league home fixtures).

Hang on a sec.

Please can you insert into the article.

Jenks must Stay
Reply to  Hutch

Is he still injured?

He wasn’t mentioned by AW as he’s injured.

What about Yaya Sanogo?

So there’s no excuse for not winning the league, but he’s not going to do it. Might want to give another manager a chance with these forwards.

Tob, your congregation must have defrocked you for your perennial pessimism!

The Doff
Reply to  Ex-Priest Tobin

Yeah, because a quality attack is all you need to win the league. It’s easy, really. #WengaOut

What would our absolute Premium front 3 even be at the moment? Sanchez, Feo and Welbz with Mesut slightly behind them? But Wenger loves Giroud and I would love to see more Perez… not even mentioning Ox here who’s also slowly but surely picking it up. I love how Ox even managed to change the game from RB against Man U to set up Giroud… both of them subs in that game!

Not to mention Iwobi!

I think Perez, Iwobi and Ox are fighting for one wide role tonight.
Unless Ox did enough to get picked alongside Le Coq.
Theo and Welbz off the bench if needed. Happy times.

Chamakh
Reply to  The Only Olivier is Giroud

clins
Reply to  The Only Olivier is Giroud

i think anyone can play both wings. but wenger always prefers his left winger to be more like a midfielder . iwobi and ox are the only players have who are good with ball at their feet. so if sanchez is striker taking in consideration of current form front three would be iwobi-sanchez-walcot.

ox can play on both right wing and left but in futue he or welbeck might replace walcot on the right wing.

Andy Mack
Reply to  The Only Olivier is Giroud

Some opposition suit certain types of player, so it’s not really possible to pick the same best 3 for all games.

As much as I love the man I have to disagree with him here.
Henry, Bergkamp, Pires, Kanu, Ljunberg & Wiltord definitely a better attacking unit for me.

I’m predicting you are correct.

is the record broken or what 🙂

*reaches for a large G&T and places head in hands*

have to agree with you. man to man our invincible team simply trumps current team. the kind of character and the worldclass players we had could not be rivaled by current team howerver good they are. just take a simple example the players in that team were all linked with mighty teams like real madrid , barca or inter etc. while in our current players only alexis attracts such strong interest

maybe as a squad we are a whole lot stronger than we were. we have great squad depth .

If we talking about the starting 11, then the invincibles were streaks ahead…. An attack containing Bergkamp(God), Henry and Pires is going to be tough to beat…. However, if we’re talking overall squad and depth, then we’ve never had it so good. Just my humble opinion though….

On the side note! I almost forgot today is transfer deadline day.

That is the problem though. Were we to go out early in all our competitions, it’d be next to impossible to keep everyone happy.

All the more reason to win everything, then, I guess!

Bergkamp Henry Kanu Wiltord Jeffers and I think Reyes as pure senior forwards we once had in one squad. This was our best squad by far both in quality and quantity. Dont even bother to count wingers and attacking midfielders.

Rashwho
Reply to  gooner of Oz

These aren’t better than Sanchez Ozil Perez Giroud Welbeck Walcott Ox. Their too slow and overrated

Reyes and Henry were not at all slow…and Pires, before the cruciate injury, was hardly pedestrian…. And as for Bergkamp not being fast – he didn’t need to be, he was Dennis fucking Bergkamp!! You need to have some strong words with yourself!

Imagine if we had managed to keep Serge Gnabry.

Gnabry is shit he wouldn’t play here. Walcott & Ox are much better

But I suppose in the Invincibles team he would have started every game over Henry and Bergkamp?

There was a possibility that he wouldn’t have gotten enough games to prove himself as there were 4-5 guys before him in the pecking order at the time.

Seems to be doing well in Bremen, saw the Bayern match and he was their best player together with Kruse. Will probably be bought by one of the Bundesliga top clubs in the summer.

Rating strikers..no 1 Sanchez
No 2 perez
No 3 giroud
No 4 wellbeck
No 5 wallcott
All very good not much between them all different quailtys

They are all happy that’s what is important.

Why, almost all the time substitutes will only be brought in after around 70 minutes, unless there is injury?