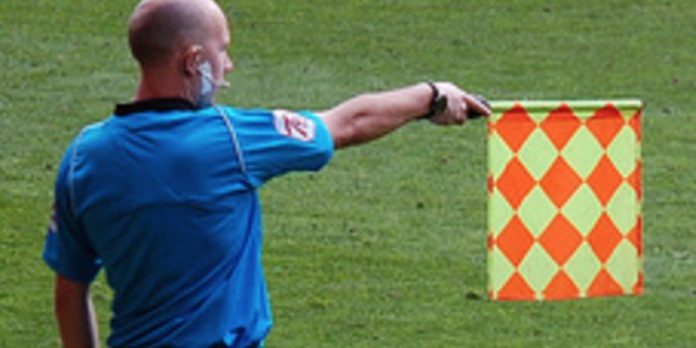 Arsene Wenger says that some of the proposals in the dossier presented by Marco van Basten yesterday are worth discussing, but said the offside rule has to stay in place.

The former Dutch international revealed his FIFA commissioned plans on Thursday, and while some certainly merit some discussion and consideration, Wenger was not convinced by all of them.

Asked about it today the Arsenal manager was keen stress the importance of offside for the game.

“Changing in itself is not a quality, improving is the real target,” he said. “So, some of the proposals are discussable, some of them I don’t see any big interest.”

Asked which ones he would be willing to consider, he said, “Real time. Maybe temporary exclusions (sin-bin). The one I don’t find interesting is suppress offside.

“Offside is what makes the teams be together, and it’s a big quality of a team sport.

“Its an intelligent rule as well, where you can use your intelligence so that’s important to keep that in the game.

“Lets not forget that football improves as well, people say ‘It’s too tight, it’s too compact’, but the evolution of the game has always been like that.

“Defence gives a problem to the attack, attack finds the solution and the response, and the defence creates a new problem again for the attack.

“So we have to keep that going, for the improvement of the game it’s important that you always face new difficulties.”

Common sense. Better step forward would be to have the decisions made by computer rather than a linesman that has to be looking in two directions at the same time – where the ball is being kicked from and when and where the player is in relationship to the defence. Often an impossible task.

Lord Nicki B
Reply to  Pedant

The beauty and unpredictability of football comes from human error.

A review system however, like the one in cricket, in limited number however would be good to see.

Rogerbij
Reply to  Lord Nicki B

I dont know whether to thumb you up or down. There is no beauty in football from referees making human errors, the real beauty is in unpredictable matches and exciting football.

I don’t know about that. The goal-line technology is pretty much the only system that is effective. We all know that unlike other sport, in football there is a huge part of “appreciation”. For example, do this tackle deserves a red or not. Was this pulling sufficient for the player to go down or not. Was this nasty (maligned) or not. All of this is interpretation and look, consultants, fans, we spend our time debating about an action without sorting it out. I don’t see any improvement if referees spend time in front of a screen to debate. Moreover. The… Read more »

Tim
Reply to  Lord Nicki B

That was the argument used against introducing Hawkeye into football. I haven’t found the game to be any less beautiful now that we know when the ball has gone in or not.

Seems pretty straightforward to me – if there are rules and we have better ways of verifying them, then do it.

Pedant
Reply to  Lord Nicki B

I’d prefer to limit the human error to the players, preferably the opposition ones.

A review system would be better than nothing, though the review system in rugby union, for example, means lots of boring stoppages with everyone standing around and makes a dynamic game frustrating. This would be similar for football.

Each team may be allowed only one review claim per match and it has to be used to protest a penalty kick or an actual goal.

Agreed a review system would be better than nothing.

Frillzy
Reply to  Lord Nicki B

A limited number review system is definitely a step forward. Limiting them to 2 or 3 per match means a manager having to decided if and when to use one. You would also have players who are convinced of a wrong decision signalling the manager to use a review and then the decision from the bench of whether to go with the player or not.

I for one think these scenarios would make for some interesting viewing.

sam
Reply to  Lord Nicki B

The beauty in football comes from the unpredictability of the players and managers mindsets, tactics, and individual moments of quality, not referee errors. Errors of the players, yes, but not the officials. Football is obviously reluctant to embrace new technology, but they are doing so slowly. I think for offside, a system where the linesman wears a watch which buzzes when the ball has been kicked, so that he can spend all his time looking at whether players are offside or not would be a step forward. Otherwise the other way around. But I think it won’t be long before… Read more »

Then each player can have a chip in his shirt and the buzz will tell ref there is a definite offside. Harry Kane the cheat has his cheap chip closer to Arsenal goalkeeper than all Arsenal chips and the buzz goes off.

I thought that is how its done now >)

Why not
Reply to  Lord Nicki B

Human error only creates tabloids. And makes the game shitter to watch. Minutes and minutes of game time are eaten up by complaints and arguments ontop of time wasting and cheating. Games and results decided incorrectly. How is that beautiful?

Fans complain all the time about the price they pay to watch matches. So why do they have to only watch 60% of the game whilst the other 40% is spent on the floor or out of play.

Savage
Reply to  Lord Nicki B

The beauty and unpredictability of football comes from players choosing what to do with the ball, not referee mistakes

Chamakh
Reply to  Lord Nicki B

I agree tuhat unoredictability is one of the beauties of the sport. Though individual errors by referees can have huge impacts on match outcomes. Also with the evolution of social media, referees receive ridiculous amounts of criticism after every big game. By introducing a hawk eye system you could make the game more fair and reduce the pressure in referees. In tennis a lot of players and pundits were against hawk eye when it was introduced. Now nobody is complaining. In football you could have a similar system with 3 challenges per team where you could challenge a referees decision,… Read more »

For some refs the criticism is completely justified.

49er
Reply to  Lord Nicki B

I never understood the argument of ‘Oh, but we’d have nothing to talk about down the pub if there were no referee mistakes.’ Seriously, is your life that boring?!!

Imagine how many goals this team would score if there was no offside rule! Our defence seems to have half abandoned it already so we’re already halfway there.

Seriously? Scrapping the offside rule would bring parking the bus to a whole new level. There’s be four forwards and four centre backs in each penalty box, with the remaining two midfielders on each team hoofing the ball upfield, back and forth. It’d be even more boring than watching basketball.

Spot on, a manager’s ability and fame comes from setting up the defensive lines, drilling them and finding solutions to defensive strategies. If there were no offsides, a forward line of Carroll and Crouch would be world class, that’s not what makes the game

Trust Wenger to be all philosophical. Hard to argue with him on that.

I would love to see the offside rule more effectively refereed through video replays. Every week, there are goals scored that are actually offside, and offsides given which were onside. Some people argue its part of the game, but I hate it because it is so bloody unjust when we lose based on a wrong decision. Clearly the assistants have a tough job with the speed of the game. What I would like, instead of eliminating offside, is that goals scored get a quick video review to make sure they are not offside, like we see on TV now. This… Read more »

Wow, that article really does come from the tin-foil hat brigade, doesn’t it?

So you think having the majority of the ref coming from the north is a good thing???

Van Basten was a better footballer than he is at recommending rule changes.

I’d love to see a debate or panel discussion on the beautiful game with Wenger and other philosophical, footballing geniuses.

Only problem I see ŵith this is finding some other philosophical football geniuses.
Andy Townsend perhaps? Robbie Savage? Michael Owen?
The list is beginning-less.

Must they all be from the UK, or, in the case of Wenger, UK based?

Once Wenger retires, he needs to head a one man committee to review the rules of the game. FIFA, UEFA, FA, are you listening?

Only Wenger could make the offside rule sound so poetic.

If always wanted real time. 40mins of ball in play each half. But I fear advertisers would not like it. Have the 4th official run the clock and half and final whistles blow when ball goes out of play. Just like rugby

A suggestion is missing: Fewer players. When you look at old football footage, the players seem to have an ocean of space and time. With the arrival of “total football” through the Dutch in the 1970-ies, and the much improved strength and fitness of professional player, the pitch has become overcrowded. I belive the game would be much more open and elegant with only 8 or 9 outfield players.

Scrapping Mike Dean will turn out a bigger benefit to football than almost any other thing I can think of.

Would love to see the off side rule ruled out! Players running like headless chicken around the pitch. More one on one duels, more spectacle.

Why would you need to run around the pitch when you can camp out in the 6 yard box?

These are the type of questions I want journalist to ask Managers. Not drama-filled, drama-driven questions

I’d actually prefer offside rules to be tightened, back to how they were not so long ago. Get rid of the ‘not interfering or involved in the play’ exemption altogether. It never made sense to me to replace the objective with subjective.

wtf is up with the gaffer tape on that ref’s head?

One thing I would like to see is when the ball is in the net the ref asks ‘Is there any reason why I can’t award the goal’ (like in rugby) to an official with a TV replays.
There is a natural break anyway and the most important thing is to quickly check if the goal is good. Was the player offside? or did John Terry assault an opponent, to allow the striker to score? Then you can rule the goal out and send the vile scum off. Sorted.

John Terry being involved is ALWAYS a reason to rule out the goal. Assuming it was scored by his team, of course…