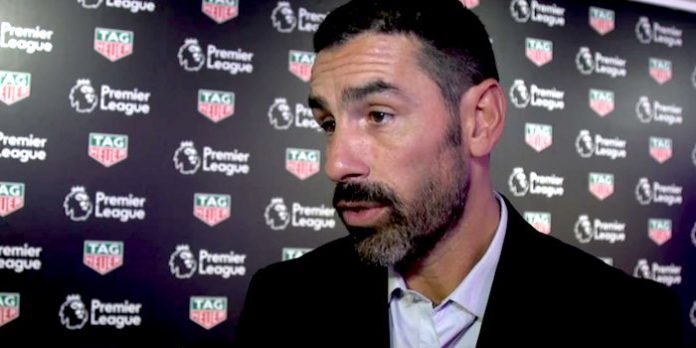 Former Gunner Robert Pires says that if Chelsea beat Arsenal tomorrow then the Gunners involvement in the title race is done for another season.

Currently 9 points behind the league leaders, a win would basically end any chance of Antonio Conte’s team over the final 14 games of the campaign.

On the other hand though, an Arsenal win would tighten things up to just 6 points, and from there you never know. I mean, we probably do know, but you also never know. The world is a weird and strange place these days where nothing is impossible anymore.

“If Chelsea beat Arsenal it’s done, the Premier League. But if Arsenal beat Chelsea at Stamford Bridge, anything is possible.

“The key for this game is the battle between Laurent Koscielny and Diego Costa. Koscielny is one of the best in the Premier League. Diego Costa loves to defend the ball, loves the fight and is a very good striker.

“So this is the key at Stamford Bridge: Koscielny v Costa.”

Followed by a lot of this:

This is it. We have to go balls out for the win. Swing for the fences.

But I just hope/pray we fucking show up tomorrow.

Hard truths are easier to accept when Pires tells them.

For God’s sake give it a go. Put out a team to get a their defence, which is not great, and don’t try to sit back. Perez, Welbz, Theo, Sanchez. Coq not to leave his own half, Hector and Gibbo/Nacho to watch their breaks and not get caught out too far forward. Kos to dominate Costa and Mustafi not to dive in, and to just give the ball simply to his own ball players. Ozil and Ox to take control of passing the through balls.

That sounds perfect to me, which is a worry because I am not known for my football management skills 🙁

I think you named 12 field players but i’m not reknowned for my arithmetic.

Yes, I thought it looked rather strong up front, duh. That’s probably why so many agreed the plan.

Team named now but he’s left Iwobi there instead of Perez/Welbz.

Even if we win,( a BIG IF) we will probably drop points against Hull in the next game.

We will never win the League, unless we address our Mentally Issues!!

That’s the spirit!
We could get Eileen Drury in? 🙂

Ian Dury would have been a better bet, if he were still around.

Reasons to be cheerful Cygan? 🙂

All we needed to do:

That’s 8 points we SHOULD have won if it were not for our ‘mental weakness’. I’m not even going to mention the game against city.

We would’ve been 1 point behind Chelsea with those results and still be in the race! At this rate sp*rs may finish ahead of us this year. And they may actually win it! SMH

What about the points we shouldn’t have got?

Too easy to point out when he should have gained points but we have picked up points where we were lucky to do so.

We are currently sitting exactly where you would expect us to be. It’s not good enough for fans, and doesn’t match our expectations as fans but thats the reality of it.

The points we shouldn’t have gotten like the ones against Southampton or poor United or the more recent one against Burnley where we scraped by thanks to a last minute penalty in a game should’ve won comfortably by half time?

Every year “aaaaaaaaarrrrrrrgghh, the spuds are going to finish above us”
and every year it ends in the spuds searching for a new comedy routine to firmly grab defeat from the hands of victory

That’s all that bothers you from my comment? Spurs finishing above us?

Not the silly points dropped and that had we been more focused (as top teams should) we could’ve had a legitimate chance at the title?

Yeah but it goes that way mate, don’t forget the games we nicked at the last knockings.

Can’t argue with that.

Those were silly points to have dropped.

Still not addressed, why we start soooo slow off the block.

Considering the last three times we visited Stamfornication Bridge we went down to ten men, it is a big plus that we don’t have Flamini, and Xhaka so those two won’t get their marching orders!
Hold on a minute…is the Flash back or do we have Hitman Gab on the right?!!
🙂

I’m not exactly optimistic but this game will be decided by:
A: The Arsenal players being awake
B: Who the ref is

Likely a draw. But if we are to win it, key will be midfield. I think this has been the issue. There’s something with Coquelin/Ramsey midfield that just blows hot and cold. As I mentioned before, last season Flamini was unfairly criticise when he presided next to Ramsey through a difficult period when we were without some of our better players. They managed through City and Olympiakos. When Coquelin returned alongside Ramsey we shipped 13 goals in 7 matches which cost us. Chelsea’s midfield will be their strong point. If should the Ox have to start, he will have to… Read more »

I would like a front three of Sanchez, Lucas and Welbeck. If Lucas doesn’t start, I will not be happy. Poor guy deserves a run of games.

Agree. Lucas hasn’t done much wrong. He deserves a shot, even if it’s in a huge match like this.

If we “defend” like we did for the second Watford goal though I’m afraid we’re going down 6-0 again. Mustafi etc better get stuck in and stay switched on from the first moment.

Lucas has been better than ‘hasn’t done much wrong’. in fact, he’s been very good. He should start

Yes, well, rather than getting “stuck in”, I think Mustafi would be a better player if he could just focus, concentrate and stay disciplined.

At this rate, we should just go all out and see what happens. It’s make or break time. Come on! Put out an attacking team.

To quote Roger Federer after winning his 18th major last Sunday: “Be free in your head, be free in your shots, go for it. The brave will be rewarded…”

The other option is Iwobi. Gaffer mentioned him today. He can play midfield in similar link role. He has the strength, technical ability and clever passing. Again it is an untested option with Coquelin. Personally I feel Iwobi can provide in midfield. We have enough competition out wide areas as is. Whatever the case, we will have to have our wits about us. Costa is a big time diver and the Ref may have been bought in favour of Chelsea so we must be very discipline not to make any silly challenges. Maybe a blessing Granit isn’t eligible for this… Read more »

I worry about Iwobi defensively, his awareness and strength for a nasty fight. He is good when the team is on the front foot, but Im not confident in him the times we are on the back foot. Im always happy to be proven wrong though when we get the right result!

Lucas has a streetwise quality about him that Iwobi’s doesn’t and I think that could be needed in games like this.

No, not Iwobi. He’s fine if we’re on top but passing is too hopeful otherwise. I think he is a prospect but nowhere near the finished article yet. Ox should get the chance (and should have versus Watford) to play like Santi. We have no option to Coq as Niles is not ready for this game yet.

AW needs to be brave but it may just go wrong again but what the he’ll, we’re done if we don’t win.

Wenger out. Santori in. Relax im just testing the moderator.

What do we want? Wenger out! When do we want it? When he does i guess

If I was a betting man I would put it all on Arsenal pussyfooting around and getting beat!!!

What if we draw? It’s still pretty much over, isn’t it?

If I was a betting man I would bet on Coq getting sent off in the 44th minute…COYG!

Chelsea have already played Liverpool and Spurs in the second half. Even if we beat Chelsea, it is not guaranteed we get results against such teams. And even if we do, they still have a 6 points lead. Come on, let’s face the awful truth, the title challenge is finished. If you want to be optimistic about a major trophy, be optimistic about the CL. We’re in the knockout phase, anything can happen. There’s more chance of upsets in that competition than the PL this year.

Bobby my man, my favourite player.

Totally agree with the above comment and I would focus on both the champions league and fa cup for this season – if we win the former Wenger would leave on a positive high!!!