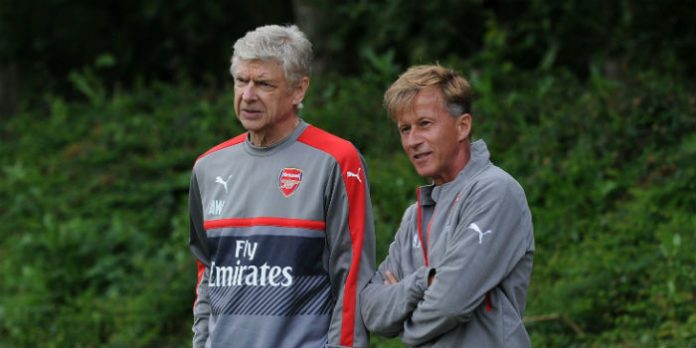 According to a number of reports coming out of Germany, Andries Jonker is set to quit his post as head of Arsenal’s Academy to take over as head coach of Bundesliga side Wolfsburg.

The Dutchman returns to the club he left in 2014 where he’d previously been an assistant coach to Dieter Jecking.

It is reported that Jonker will be unveiled this afternoon at the Volkswagen Arena and has signed a long-term contract after the Germans opted to buy him out of his current deal at the Emirates.

Wolfsburg sacked manager Valerien Ismael on Sunday after their former defender failed to turn around a poor season that has left the Bundesliga club flirting with relegation.

Jonker took over at Hale End and London Colney from Liam Brady having gained considerable experience working in the Dutch youth setup. He also spent time as an assistant to Louis van Gaal at Barcelona and Bayern Munich.

It remains to be seen whether Arsenal appoints a temporary replacement from within. It’s possible, given the lack of clarity over Arsene Wenger’s own future, that the club could wait until the summer before making a decision.

In January The Independent reported that the Gunners were keeping tabs on Pep Segura who is currently involved at Barcelona’s La Masia.

Get out while you can Jonker 😉

So close to being:

Please tell me you didnt just realise that arsene’s name is very similar to arsenal.

you are dishonest to your federation!

Not the best timing, only adds to the sense of confusion about the future…

A big shame. I think he’s done a superb job since he joined.

Any reasons why? I’m not doubting you, just my lack of knowledge on who is coming through from the youth ranks or who we have recruited due to Jonker being there.

Reasons why?
After being assistant and Youth team coach, becoming manager of a Bundesliga club is a clear career step forward.
Wish him good luck!

My reply was to Ndubya5 who said that Jonker had done a superb job.

I’m asking why he thinks that. [Perhaps start a new thread rather than misunderstand ours.]

The quality of recruits brought into the arsenal youth set up greatly improved. We poached the Jeff, yassin Fortune, donel Maylen, kelechi Nwakali and a couple of others. Through his connections with clubs in the Dutch league, a large swathe of some of our best prospects have gone on loan there and from the news filtering back in, they’re not doing too badly. He also tweaked the tactics of the youth set up as well. Sure they weren’t beating all the other youth teams but the quality of prospects we have in the youth teams and out on loan waiting… Read more »

And anyone else with knowledge, happy to hear the evidence for (or against).

Thanks for the feedback, sounds very positive.

Let’s hope he doesn’t poach them for Wolfsburg (or at least takes them on loan so that when he has won the Bundesliga and comes back as Arsenal manager they are all grown up and firing).

It’s hard to judge. But what I’ve found interesting is in the last three years we’ve produced players with a more complete foundation: Guys with lots of pace and other good physical attributes that tend to have good technique and make the right decisions in tight spaces. How far these players will go is impossible to say. But I’d like to think that added awareness is an upshot of positional switches going on down the ranks: Iwobi and AMN playing in deep midfield for example. There are a few more, but I haven’t kept up with it. That’s all very… Read more »

our academy is actually on the cusp of something great. our academy is still a work in progress . since wenger has started this academy the number of players that came through the academy to first team is very few and most of the players in them are just bought from other clubs . gibbs and wilshere are the only players the came up through the academy to first team. but in this situation is about to change. arsenal never’ve had such a talented group of youngsters in their academy many of them local lads through and through. and combined… Read more »

That doesn’t sound likely. I’m trying to think of a recent generation to come out of an English club, and the best I can do is West Ham in the late 90s.

We came close to one of our own a couple of times in the last decade, but there are too many variables. It’s a good year if one player can come through and make a dent in the first team.

https://arsenalyouth.wordpress.com/2017/02/27/assessing-andries-jonkers-arsenal-tenure-positives-outweigh-negatives/ this suggests he did a good job.

Odds on Arsene stepping down and taking that role next season….

It says something about Arsenal that the guy running our academy is able to walk into a head coach role in the top tier of the Bundesliga. Can only wish him luck.

Anyone who decides to leave Arsenal must be Jonkers

Hahahah… What a jonk

What´s more important to me today is celebrating 15 years of Arseblog – I´ve been reading it almost everyday for 6 years now. The first site I open every morning and the only comment section I read on the web is the news.arseblog site – modern media is crap. Kudos to arseblog and Mr. Blogs and all the others – may we have at least 15 more years

That worked out well!

Certainly could be seen as evidence things are not well at the club. Experienced staff fleeing.
However its more likely just a good opportunity he couldnt say no too and no doubt he leaves with Arsenals blessing.

The News Hound was using the Spanish spelling.

I think Jonker would definitely have consulted with Arsene about his future before making this decision. Interesting times. The plot thickens.

Does this mean that he didn’t expect to get the Arsenal job any time soon?

I sincerely hope this is not the beginning of the end…..

No big loss. Good luck to him.