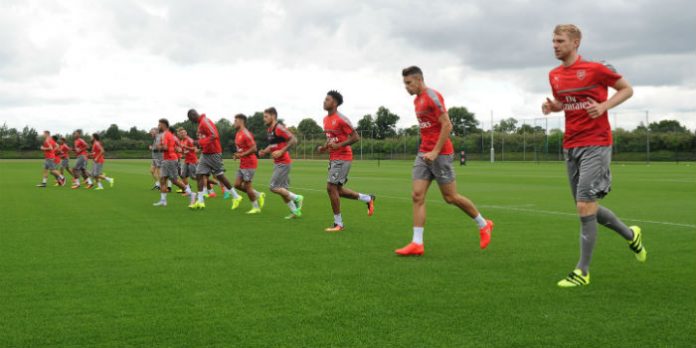 Seeing as this season is agonisingly painful, we – the ever-optimistic team at Arseblog News – thought we’d look ahead to the summer and Arsenal’s preparations for the glorious quadruple-winning 2017/18 campaign.

Thursday, May 25
New Puma home kit rumoured to be launched [via @FootyHeadlines]

Arsenal have averaged 6.3 friendlies in their pre-season preparations over the course of the last decade so it’s possible that the club might organise another game between the end of the Emirates Cup and the start of the new season. In recent years we’ve ventured to Scandinavia. That said, the club will probably wait and see whether we qualify for the Champions League and if there’s a potential qualifier to play.
__

We’re off for a lie-down, writing this has made us tired.

Gosh I need a lie down too. How about something happy for a change blogs? Can we not find anything jolly these days?

We have dangled the prospect of jelly and ice cream though!

Yes, and I just saw that we’re playing TBC back to back at the Emirates end of July; what are they thinking!?

Anyone else reckon we should do an FA Cup semi final song just for the hell of it?

We’ll sell our best player.
We’ll dilly then we’ll dally then on August 31st at midnight we’ll have signed precisely no one.
Kroenke won’t care, Arsene will continue to make the same mistakes and Arsenal fan tv will throw a which bell end can throw the biggest wobbler competition.

That’s a bit rich. We haven’t had need to sell our best assets for several seasons now. Wenger has also bought players VERY early. Granit last season at premium pricing. Its convenient to try and criticise Wenger with red herrings perpetuated by the media because you may feel frustrated but it is thoroughly not reflective of reality. We may have to sell our best assets this summer but how we respond in kind will dictate the way forward for both Wenger and eventually the successor. If we seek to add in players of close to equal caliber for the two… Read more »

That’s why on August 30th we were scavenging around trying to tie up deals for Perez and Mustafi? Hardly the actions of a man with a clear concise plan. The year we just bought Cech cost us the title by being reliant on injury prone midfielders. Our refusal to pay up for Suarez and Higuain was staggering, leaving us to panick buy Ozil on the 31st of August when we’d already let two world class strikers out of our clutches. When Liverpool said Cavani’s just moved for £55-60mill and we value Suarez in the same category, had our goal been… Read more »

I think Wenger bought som fine players leading up to this season. Players who’ve under performed which has been hugely disappointing but none the less they’re good players. I don’t see how anyone can fault him for that.

A player who could have had his pick of clubs anywhere and chose to sign for us. You say panic buy I say poppycock.

Rich, when you’ve spoken to Suarez agent, he says Suarez really wants to join you and it just has to be an offer over £40m BUT you then find that Suarez really doesn’t want to lose his ‘loyalty bonus’ from Liverpoo by putting in a transfer request and pushing through the deal, Do you really wan to pay £55m+ for him?
Irrespective of that, he’d have been off to a big Spanish club at the first opportunity anyway, as his Spanish wife was really homesick…

Looking forward to seeing The Arsenal when they come down under in July! Haven’t seen an Arsenal game since the Emirates cup back when Hleb and Song were still on the team sheet.

Got my tickets for both matches!

I have my tickets for the Wanderers match too.

After 10 years supporting, this will be my first time seeing The Arsenal live

Been a Arsenal supporter since they beat MU in the FA Cup in the seventies, had my ups and downs like all of us… but 1 day it will all come true… 3 trophies in 1 season!!!!.
Being a Kiwi, I am really excited about going to see them in Aussie land… Providing the PM doesn’t have any more PMS moments and not allow us there.

Thanks for that blogs. I needed a laugh. What flavour ice cream are you providing and have you a personal delivery service ?

Tickets to both sydney fixtures secured. Taking the week off work. Finally dont have to travel to london to see my boys! COYG!!!!

Mustafi love but it\'s over now

Fuck it i’ll gaze into my crystal ball then: yeah, nah, nah, thick and lustrous, nah, many will die needlessly, yaya, he’ll visit on a day trip but nah, half-arsed ones, just the french ones (including arsene), Thierry, he’ll try khakis and hate it, and seems inevitable

Goonerrific
Reply to  Mustafi love but it\'s over now

I just say I’m glad the team is finally coming to Australia, but bugger me, could have arranged to play someone decent… The two Sydney teams are nothing really to get excited about. I went to the MCG to watch Man City and Real Madrid – 95,000 people… we needed to have arranged something a little closer to that type of game to draw a bigger crowd and lift the profile of this great team in Australia. At least I get to see them again, just hoping a few big names travel with the team.

Will Arsene Wenger sign a new contract? Most likely Will we recruit a sporting director? Not likely Will there be a St Totteringham’s Day? at this rate not sure Will Steve Bould finally have the hair implant op he’s been waiting for? Hope he does Will Alexis Sanchez and Mesut Ozil sign new contracts? very much doubt so Will the black and pink third kit burn our eyes as much as we think? as long as team plays good i dont care about kits Which player will anger Shad Forsythe the most by returning the tubbiest? Wilshere Will we let… Read more »

Looking at that schedule, I seriously doubt Sanchez’s or Ozil’s contracts will be looked at until after the squad get back form the Asia tour given both will be away in the confederations cup. Also, Australian gooners, I doubt you’ll be seeing either player in Sydney – we usually give players two weeks off after a tournament (even the confederations cup) so its highly likely they’ll join up with the squad in China instead.

Donald Rumsfeld? Or was there a joke I missed?

Good to know we face Bayern Munich early season – certainly doesn’t look like we’ll get them in Champions League. Crystal Palace ball gazing – Bemoan loss of players on extended breaks after Confederations Cup Lose opening game at home to Chelski Go on 10 match unbeaten run to get to top of league Lose 3 players to injury for rest of season (Cazorla, Mustafi and Welbeck) Promising run of games sees us lose to Watford, Stoke, WBA and draw with Brighton Calls for Wenger to resign (or if he left, to re-sign) Complete first clean sheet of season in… Read more »

We may lose Both Ozil and Alexis this summer which will make it interesting indeed. I think provided this season does not end an unmitigated disaster (outside top 4), there is reason to consider extending Wenger for one more season to see through the summer patch and hand over a better shaped squad to his eventual successor. As far as both our key players are concern, I feel we have a slightly better chance retaining the German. However the list of clubs able to lure either player is a short one. Assuming we do not cave in to old habits/… Read more »