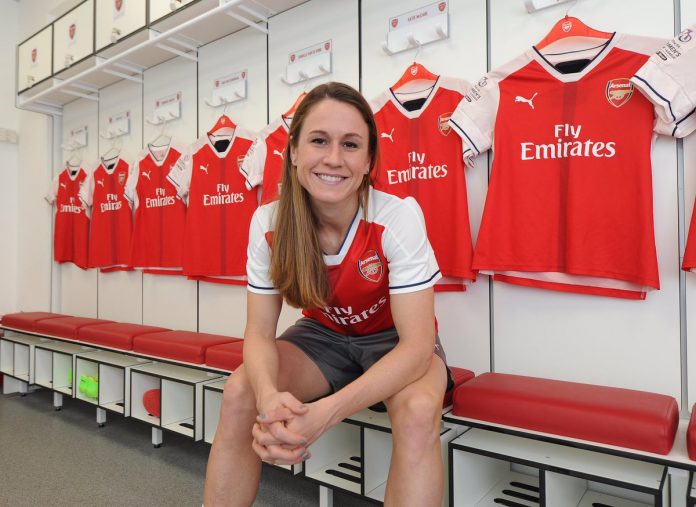 Arsenal Ladies kickoff another domestic campaign on Sunday, with a North London derby against Tottenham Hotspur Ladies in the 5th Round of the FA Women’s Cup. It’s the first time the clubs have met in women’s football since 2010- with Spurs two divisions below the Gunners.

A North London derby will certainly be a new experience for three time Olympic gold medallist and one time World Cup winner Heather O’Reilly, who joined the club from FC Kansas City in January. “Arsenal is a top notch organisation to be part of. You quickly want to be part of the environment and the professionalism here,” she tells Tim Stillman, exclusively for Arseblog News.

“London is not so exotic, but there are some interesting nuances compared to the states, driving on the left hand side of the road was certainly very interesting for the first few weeks!” a cheerful Heather O’Reilly says of her acclimatisation to life in England. Heather is known for her professionalism, her enthusiasm and her can-do attitude, as well as her pedigree.

A buccaneering presence on the flanks, O’Reilly will mostly play on the right hand side of the Gunners attack. Heather, affectionately nicknamed HAO (Hey-Oh) in the states, reveals that the decision to come to North London was largely a result of her initiative and her appetite for a new experience. “I knew Pedro [Losa, Arsenal’s manager] from his time coaching in the US.

“I reached out to him and told him I had ambitions to play in England and in London and I wanted to see if Arsenal and I would be a good fit. We started those conversations last fall and I came to London with my husband Dave and trained with the team for a week, I played an exhibition match against Reading at the end of last year. I came to see the club, went to see a men’s game and I decided the club was a good fit for me and they agreed I was a good fit for them.”

O’Reilly is part of an American diaspora that has arrived in Europe during the winter. Crystal Dunn joined Chelsea, 2015 Ballon D’Or winner Carli Lloyd signed for Manchester City, while Alex Morgan has signed for Lyon. “For an American international, this is the calendar year to come to Europe because it’s not a tournament year,” explains O’Reilly, who retired from the US Women’s National Team last year after 14 years and 231 caps.

“Putting yourself into a different environment, with different stimuli helps you to grow as a player and a person. For myself, I have had a very full career, so playing overseas for a club like Arsenal is a new adventure and a new way to push myself. England has an opportunity to be a leader in women’s football. The facilities, the infrastructure and the fan base are all here. The national team is growing too. It’s an exciting time to come to England.”

Arsenal lost some experienced heads in the transfer window, with Rachel Yankey, Emma Byrne and Casey Stoney moving to pastures new and Kelly Smith retiring. Given her level of experience, O’Reilly is conscious that she will quickly become a reference point for the young players in the squad.

“Pedro is excited about the mix of players we have. We have a really seasoned group and then there is a clutch of exciting young players. It’s a good mix, to have some really good mentors for the young players, but having the youngsters pushing and competing with the more senior squad members too.

“Pedro wants me to bring my qualities to the group, particularly my enthusiasm and intensity in training. I know what I am all about and I hope I can be a role model for these incredible younger players.” Teenagers Chloe Kelly and Carla Humphrey will particularly enjoy training with O’Reilly, given that they will likely understudy HAO on the right hand side of the attack.

“Carla and Chloe are very confident players, they like to get on the ball and take players on. If I can in some way show them what it takes to be at the highest level for a long time, I will be proud to do that.” As an all-action right-winger, Heather is especially excited about linking up with marauding right-back Alex Scott. “Alex and I have known each other for a number of years from when she played in the states,” O’Reilly explains.

“We had some good battles playing against each other, now I’m really glad she’s on my team! She’s a world class right-back. She is like me in that she likes to get forward and get a good delivery into the box, so we will continue to work on that partnership. My game will be about getting to the by-line as fast as possible and getting the ball into the area and Alex’s game is similar.”

Heather has been very actively taking the time to get to know the culture of the club, attending several men’s games already and watching training sessions with the youth team. But she admits there is no better way of getting acquainted with Arsenal than by taking part in a North London derby on her full debut, “I certainly know that it’s heated and that it’s very meaningful!” she asserts.

“We’re mentally preparing for this game. It’s our first competitive game of the season, so we’re excited about that. We know that Tottenham are on a good run at the moment, so they will be feeling confident. It’s going to be a game of passion and that’s going to be good for the fans.” The fact that the FA Women’s Cup Final is now played at Wembley is also a significant carat for the players.

Wembley is a venue HAO is very well acquainted with, having won her third Olympic gold there in 2012. Arsenal are also familiar with it, they won a record 14th FA Cup at the stadium last May. O’Reilly points out that the cup played a significant part in attracting her to come and play in England. “We’re about winning trophies and we have a great tradition in this competition and I want to be part of that.

“It’s such a special tournament for me. We don’t really have an equivalent in the US, with teams at every level entering and the wonderful stories around upsets. It’s something very unique to the game here in England and I can’t wait to be involved. It’s a big focus for Arsenal.” Heather is clear that she will not be the only American curious about Sunday’s game, or indeed English women’s football.

“Now myself, Crystal and Carli are here, there is a lot of interest in the states. I’ve had so many people asking me how they can watch the games, so I want to work on getting them streamed to the US! Quite frankly, I think that’s the next step, people need to be able to see these games as well as our loyal fans that get to Boreham Wood. Everybody wants to know about the level in England now.”

One thing is for certain, with a player of HAO’s pedigree in their ranks, the level at Arsenal has just gone up another notch.

Arsenal Ladies play Tottenham Hotspur at Boreham Wood’s Meadow Park at 2pm on Sunday. Tickets are £6 adults and £3 concessions. You can pay with cash on the turnstile, or else buy your tickets here.

Arsenal Women Weekly Round Up- Weak At the Knees

A good read, thanks, and good luck to them! What better way to start off than to flatten Spurs? That’d be lovely.

Spurs in the second division . I guess it’s true always in our shadow. Long may it be so. The counts.

Counting how many years since they last won the league…… In black and white!!

Fuck auto correct. That was supposed to be the cunts.

Can’t you resist using the c-word for the five minutes it takes to read a post about women’s football? Especially concerning an American woman? People do not throw that word around in the States. I know you hate Spurs. Have a little class.

An interesting read. She sounds a very intelligent and articulate player.

Lets hope that she can do the business on the pitch.

Proud to have another American on the club, now if we could work out a transfer to get Kronk out.

Heather had a great game today. Pretty much ran the show for about an hour and has already developed a good understanding with Jordan Nobbs.
Good times ahead 🙂