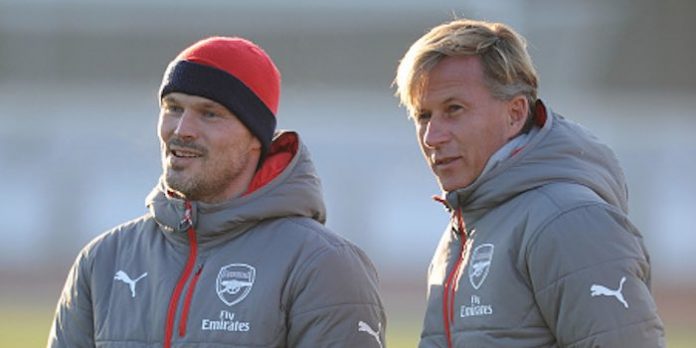 Arsene Wenger hopes Arsenal will benefit from the experience Freddie Ljungberg gains in his new position as assistant coach at Wolfsburg.

The Swede was lured to Germany this week by Andries Jonker who has swapped his role as chief of the Gunners youth academy to become head coach at the relegation-threatened Bundesliga club he departed in 2014.

Reflecting on the double loss Wenger wished both men well and underlined his eagerness to see ‘Invincible’ Freddie back at London Colney in the future.

“Freddie has done extremely well with the under-15s here,” Wenger told Arsenal.com. “I was in touch with him constantly during his experience there.

“We gave him permission to go [to Wolfsburg], but with a promise that he will come back if there’s a possibility to come back here. Overall, I think it’s part of his education to become a coach, to have this kind of experience. Hopefully, we can use that later at Arsenal.

“Andries has been at Wolfsburg before,” Wenger added. “They knew him and they took advantage of the fact they know him to attract him there.

“Wolfsburg is a good opportunity because they have the third [highest] budget in the league. If you look at their team, their squad, they have very good players, so I think he has a good opportunity there to get them out of the relegation battle and as well to prepare to be their long-term coach there.”

Ljungberg isn’t averse to new experiences. After leaving Arsenal in 2007 the roving midfielder took in stints in the United States, China, Scotland and India. We wish him all the best at the Volkswagen Arena.

Freddie all the best man! Except you meet Arsenal of course.

Would love to see him back as manager or coach.

Why haven’t Wenger ever said same about Henry? Wenger created Henry but Titi was massively responsible for the success Wenger had in his career. Henry was asked recently who was the manager, he would copy from, if himself becomes a coach. He promptly said Pep but he explained: He prefers a playing style where you attack but make sure you are in a good posture, you are solid if you lose the ball.

Freddie seems to have a better attitude than Henry, and it sounds like he was quietly getting on with doing a good job and impressing with the under 15s. Henry is all about Henry and preferred his job as a pundit to the responsibility and hard work it takes to be a good manager or coach. I’d love to see Freddie back, but not Henry.

I’d say Wenger was equally responsible for the success Henry had.

When Henry is serious about coaching and management I’m sure he’ll find the doors open to him.

Arsene Wenger is the real Godfather

Love you to come back to usFrddie, don’t leave it too long though.

Arsenal managed by Freddie? Why not! Not yet though ?

?We love you Freddie

Hadn’t considered this…Was too annoyed at them stealing our sexy swede. Obviously it’s a no brainer for Freddie to get a huge experience and I wish him all the best and hope one day he comes back home.

Legend, Good Luck and Welcome Back.

The swede is a traveller for sure, .but all good travellers return home at some point…..safe travels, Land strider…..and good luck!

A very popular Gunner. Still remember his debut, when he basically wrote his name into the Arsenal legend history books with his delightful chip over Schmeichel. Nothing like being the icing on the cake when you’ve just bent Man Utd over and given them a good rodgering.

21 minutes in, but the entire clip was a delightful reminder if when we were mighty.

Blocked by IT departments everywhere

we all gunners fans prefer you over henry. Plus Dennis and Arteta. Let this trio come back. BUT NOT HENRY.