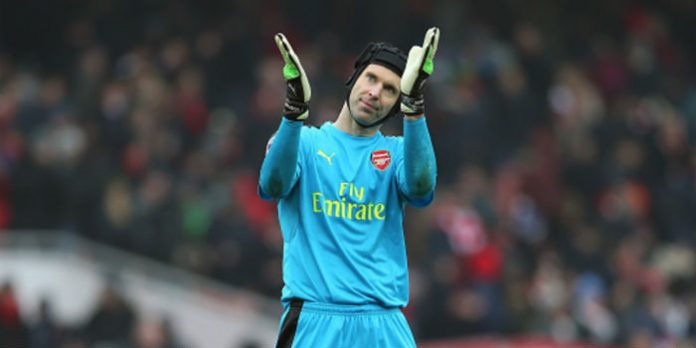 Petr Cech says that criticism of Arsenal’s players for lacking characters is incorrect, and that recent results don’t reflect the make-up of the squad.

The Gunners have had a faltering few months in the Premier League, and face a very tricky run in to try and achieve a top four spot, but the former Czech international dismissed claims that there were no leaders in the squad.

“I think it’s easy to hide behind ‘oh they lack leaders but they have leaders’,” he said. “You need to see behind the scenes how well the team works and how we operate.

“Sometimes you have periods of games where you prepare and do the right things but the game starts and it goes completely wrong.

“We had a difficult period where the team was losing games it should have not lost and obviously you come to the situation where you play under pressure and need to find a way out.

“Sometimes you find a way out quickly and sometimes it takes a bit of time.”

It certainly has taken a bit of time for Arsenal, but the 2-1 win over Man City on Sunday showed some promising signs at least.

It’s now about whether they can replicate that effort and performance for the final seven games of the season, starting tomorrow night against Leicester at the Emirates.

“The FA Cup is at the end of the season so there will be a lot of conditions before we play the final,” continued the 34 year old.

“Our target is to finish as high as possible. At the moment we have games in hand but the situation in the league is a bit complicated for us.

“We will be able only to judge and measure at the end of the season. Then we’ll see for the final because if you don’t qualify for the Champions League it will be a big loss and a big disappointment.”

Who cares about leaders, we got Rob HOLDING!!

Would be nice if one of our leaders could save a penalty or two.

Interesting comments on goal city scored. Aguero pushed the ball a little further than intended I think, gave cech a chance but it would have been incredibly close as to who would get there first. If it’s Aguero, cech is off and we don’t win that game. Maybe it was right call not to try and get there and risk red card. The result says it was.

Fairly certain the rules have been changed to a yellow card for a genuine attempt at the ball.

Not if your last man me thinks

Even if you’re last man. Especially if it’s a penalty (not that he would save it based on all the pens he’s faced with us). No double punishment. New rules in England this season.

Otherwise, that was a clear error to me. He should have been able to capitalise but he just looks slower these days. We need a new keeper to compete with him.

Tell the official Behind the goal from the Bayern game that…

It would have been a yellow card, not red, if Aguero got there first. But I think you are right that Cech should have gone for it. Aguero’s first touch was poor and I’m pretty sure Cech would have smothered it before Aguero could have got another touch.

It was so good to see every one fighting and putting in a shift to win the game, a real team effort with no one hiding or walking around dazed.you don’t need leaders if your all working your arse off and supporting each other. It’s when things go wrong and all the players are standing around looking clueless that the so called leaders are needed

The chelsea reject is all talk these days. On a sharp decline.

He says after making a match winning save from yaya toure.

I see.. people giving him a lot of stick these days.
I think the guy is a proper legend of the game and he deserves to be getting a lot more respect than he has been getting at the moment.
Yeah..that augero goal moment was an absolute brain fade and he definitely must have done better but still..Respect when and where it is due.
He hasn’t let us down more than anyother player this season.. So come on now..

Tobin’s just mouthing off working-man style over his humble lunch break, chewing a 3 year old pickle and an old Arsene Knows signboard. He doesn’t like something he speaks his mind. In plain speak. PC is out. Speak now think never. Tobin mate keep talking shit, you pay hard earned money for the right.

I think there is a story we haven’t been told yet. How did we collapse so much? Ozil was out for a long time, did he have a problem? Anyone else got a theory? (or better, know something?).

If not I can only put it down to injuries, unsettled side changing frequently or complacency.

Arsene, give us that book already. In my theory ArsenalFan TV takes centre-stage. Anyone else snored through the recent season of Homeland? They stole my theory and ran with it damn hacks.

Reading this only makes me more worried. It sounds like he doesn’t believe there has been anything wrong at Arsenal, and that we have just been unlucky/taken a blow to our confidence that has taken a while to recover from. It’s great that we seem to have found some confidence again but we cannot put the slump down to bad luck and carry on as normal.

“We had a difficult period where the team was losing games it should have not lost and obviously you come to the situation where you play under pressure and need to find a way out.”

But then why did we lose those games? It must be either tactics or mentality. This is the bit the players and manager always skip past. And when someone does articulate an actual explanation like Theo did, they get slammed!

Lack of Perspective
Reply to  Loose_Cannon

I think it was both tactics and mentality. Wenger changed to 3 at the back and the teams focus changed with it. As much as i love the manager and think our long-term chances for progress(and potential success) is him staying for 2 years and sorting out the mess he helped create. It is this sort of thing He should definitely improve on. Although i think he takes more blame for the current stasis than is necessary, the board are hanging him out to dry and he has been picking up their slack and doing their work in addition to… Read more »

canon 10000
Reply to  Lack of Perspective

There is huge temptation to have a ‘cult’ of a manager (esp while they are successful.) Look at Jose, he’s a more consistent Sam Allardyce with a big mouth. But he is constantly built up as a Machiavellian genius. Ranieri was the court jester till his team did the impossible. Klopp, Pep, Conte – they are so hyped… it is crazy. Managers aren’t solely responsible for what happens. They have staff – competent fellows, many of them experts in their field. Players affect games more than anything. Yet when things go wrong often it is Wenger who doesn’t do defense,… Read more »

I think the issue with Theo, for me anyway, was that a professional player turning up for work and collecting around 100k a week should have a mentality that will not allow himself to be seen as a so painfully weak or utter words that offer confirmation of him as a mental midget.

prove it on the pitch!

‘Our target is to finish as high as possible’, well if your targets are that unprecise than no wonder you can always consider a season as ‘successful’ (this was the case for the last 10 years). Arsenal operates as a big corporation the only thing they miss is a clear commitment that each corporation makes ahead of the year to the expected results. Instead we hear such vague statements all over again and cannot expect any accountability from board, the manager and players when another season turns to mess.