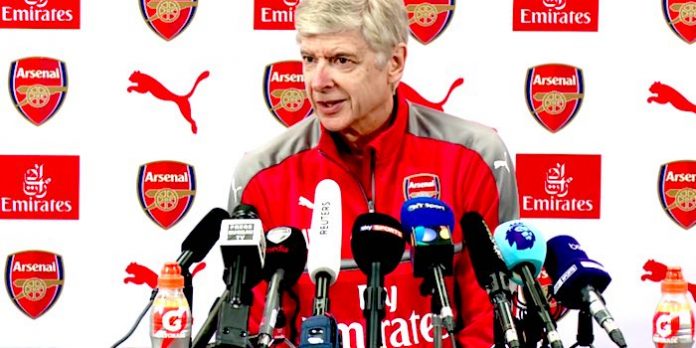 The Gunners face the champions just three days after an energy sapping 2-1 extra-time win over Man City in the FA Cup, and there was no real clarity about who might be in or out for tomorrow.

Speaking at his press conference today, Wenger said, “Basically we’re in unknown territory at the moment, yesterday the players were on recovery.

“Today we’ll check to see who is available or not. Overall we have nobody injured after the game.”

Following reports about Alex Oxlade-Chamberlain leaving Wembley on crutches, the manager downplayed fears he might be sidelined.

“It was precautionary,” he said. “It’s not a bad injury, we’ll test him today.

Wenger was not forthcoming as to whether or not he’d stick with the 3-4-3 formation, but chances are he will continue with a system that has brought about two wins in the last two games.

Hard to change the system now. And Hector is well suited to the Ox role.

i think regardless of how well he performed in the wingback role OX should be played in the midfield . the guy is the one of our most talented midfielder right now. he can play behind the striker or at centre midfield , he will be phenomenal. only thing people use to bash him was that he lack end product and this season he has improved on it by a wide margin

I agree, eventually. Although, it is really encouraging to see him play so well at wing back. We always bemoaned his lack of defensive concentration, this will improve playing further back. He is forced to focus on the defensive side of his game. The same principle as sticking a future central midfielder on the wing to improve his close control and ability to operate in smaller spaces.

Only happening when Bellerin gets his mojo back… Or who else plays RWB?

Think we have enough in the midfield. Xhaka,Ramsey,coq,elneny but just two guys that can be effective in the right back I.e attack and defend.Ox and bellerin

He has but only as defensive midfield or right back. Nothing further forward , Ramsey needs protection when he plays. Useless defensively.

I think he’ll switch to 4-2-3-1 against Leicester as it’s a Home game with 2 changes to the team.
Hector for Ox
El Neny for Ramsey
.

The Ox role… Long may it be so!

Chamberlain is about our best player. I pray he gets back on his feet but #Wengerout

Liverpool, West Brom: Ox was the 10 then while Özil was sick… you know the rest…

One clear difference between the FA cup semi final and our last games in England has been the great support and lack of negativity. I just hope we can get to the end of season that way as it clearly gives the team a boost. All our games left are cup finals and we need to give cup final support. I think he should leave at season end too, but I say shelve the ‘Wenga ahts’ till then. I fear though that one or two bad results in the coming big games and we are back to the tense negativity… Read more »

Unfortunately he is staying. What else reason would be there for him to play with the media for so long. But I agree whatever may come we have to support the team till the end of the season

Why so many thumbs down? Personally I’m Wenger In but I find it strange that this same comment would have got far more thumbs up than thumbs down two weeks ago. Flip floppers.

I’m no flip flopper but, personally, I gave it a thumbs down because the hash tag was an irrelevant and pointlessly negative addendum.
Maybe we could also go with:
Rob Holding was calm and assured at such a young age but #wenger out
Good to see Lucas is back in training but #wenger out
I had a nice pie at half time but #wenger out
Hector’s hair is still shit, if not worse so yeah #wenger out
Etc…

Because it is needlessly poking the unrelated conversation with a stick.

Would definitely rest of for spurs and play Hector!

Leicester tend to play the long ball to Vardy & mahrez on the counter so bellerin is a must for his pace wether ox is fit or not, the problem is pushing too far and exposing the back 3 which is our sucker punch when were offensive too much,left side mahrez is tricky and pacey lets hope holding plays again with nacho in front good leveler

I expect a lot of changes tbf. It’s not easy playing 120 mins against a Pep team. We also need to factor in the game against that lot down the road. I wish we had Lucas Perez to rest Sanchez. Also I think Hector or AMN can play RWB against Leicester with Gibbs on the opposing side.
I pray Kos’ Achilles holds up this week as we can’t afford to miss him now. COYG!

i expect wenger to rotate , so as to avoid another injury . we have a lot of squad depth . let elneny and bellerin have a run at centre midfieldand wingback role and maybe give gibbs a chance. keep holding, and play welbeck or sanchez as striker.

UNBEATEN ALL SEASON (when playing with a back 3). COYGWAB3.

I would think we need to rotate given the time extra time played.

Walcott could maybe play instead of Sanchez but that would potentially be a gambe to far. With Bellerin,Gibbs, Mustafi, Elneny and Welbeck you certainly wont be dropping in quality. Same formation 3-4-3

I would play Bellerin and rest OX espically as we have Spurs and United to play soon.

I would put Ox on the bench and make sure he is fit for the tough games ahead.

Time to rotate and use the squad,a couple of changes to add some fresh legs, hopfully any players coming in will want to impress and try to win a cup final place. We have some momentum now and a couple of wins will put pressure on those above us. surely we stick with the back 3 and continue to build on it. Coyg

Assuming we stick to the same formation, I don’t see much room for changes. You want to give the same back three and the two central midfielders a run of games and Wenger probably won’t rest either Sanchez or Ozil for this game. Playing Bellerin instead of the Ox would leave you with just 2-3 attacking players Gibbs and Welbz are most likely for me to come in.

3-4-3 places huge pressure on the wingbacks. Need to rest Ox & Monreal for Spurs. I’m sure Gibbs & Bellerin will do a great job in their place

IMO need to stick with three in the back to keep Holding and Gabriel in the team along with Kos. Both have played well of late and deserve to stay in the lineup.

Would love to see a poll. Arsene out or Arsene with new tactics in. If only the man was to open his eyes to what works NOW he is part of the way with 3 at the back. Arsene, please open your mind and your eyes and I will vote you to stay

Having watched the press conference Arsene is starting to get on my tits with his jokes about not answering questions about his future and I notice the journalists aren’t laughing anymore either.

They’re getting on my tits by constantly asking the same questions they know won’t be getting answered anyway.

What do you expect him to say! It’s the press which should be getting on your nerves – as opposed to the other part of the body you mentioned!

Paul is having an argument with himself

No mate he’s the new Paul on the block…

The Ox is the most talented AFC player after Santi. He should be given a free role to rule the games. Since injury sidelined Santi, Arsenal has suffered owing to lack of a visionary playmaker. The Ox can comfortably step into those shoes. AFC’s strong point is a playmaker. Before Santi’s emergence, the role was held by Cesc.