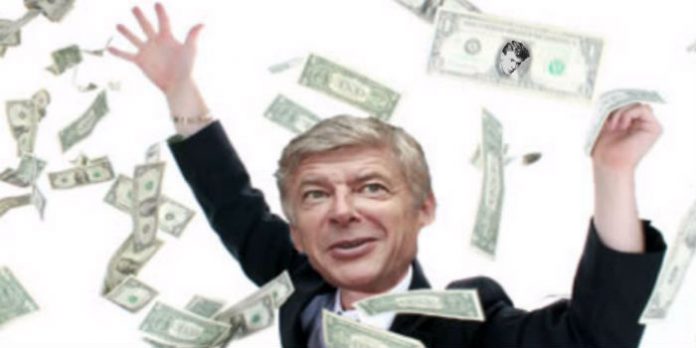 Arsene Wenger says that he’s already working on transfer targets ahead of next season, but has denied that this gives any clue as to his future intentions.

The Gunners have recently been linked with Bosnian defender Sead Kolasinac, and it’s known that a midfield purchase is high on the agenda for this summer.

At his press conference ahead of tomorrow’s Premier League clash with Leicester, the Arsenal manager was asked if he was working on recruitment for the 2017-18 campaign.

“Yes, of course,” he said, before it was put to him this might provide some insight as to what he’s going to do when his contract ends in June.

“No, I work until the last day of the season for the present and future. And the transfer targets are the future of the club and very important.

“It’s a bit secondary [my future], what’s important is the future of the club.”

Does a manager who is going work on transfers? It’d be unusual to say the least, but then nothing about this club would surprise you at the moment.

As you’ll all expect, he was also quizzed about his future, it went like this:

Q: Nothing at all?

A: No … was it about the French elections that you want news?!

Q: About your future, anything to tell us?

Q: Any idea when you’ll tell us?

Q: And does it depend on what happens for the rest of the season.

So, there you go – we know as much as we did before!

Arsenal: “Hello. I wanted to inquire regarding the availability of Bellotti.”
Torino FC: Yes, we would be willing to listen to offers. What is your (*Phone shuts*) Hello? Hello? [Did he just shut the phone on me? Must have been some prank caller]

Arsenal: “Hello. I wanted to enquire about the availability of Saul”
Athletico: Yes we would love to discuss (*phone shuts*) Hello? Hello? Can you hear me? [Hmm the line must have disconnected]

Arsenal: Yes, it is true we were in the market for Belotti and Saul. We congratulate them for their Ballon d’or nominations.

I still cannot believe Dick missed his flight to bag ozil. Get rid of him.

clins
Reply to  Lack of Perspective

i hear he is getting promotion. appearantly those things are not affected by silly things like how good you are , or do you suck at the job at arsenal

It’s not what you know it’s who you know

IamaGoober
Reply to  Lack of Perspective

Cant you? I reckon there’s genuinely worse stuff that he’s done that we don’t know about.

A friend of mine works in football and has met him on a few occasions at various events, and apparently he’s a nice guy but at the same time a total dope, kind of like Homer Simpson apparently.

He’s probably not even allowed to use the photocopier in the office in case he gets his tie caught in it or something..

I’m imagining Wenger and Bould looking at Law through the window of Wenger’s office as he walks across the yard when Wenger goes “tell me Bould, who’s that lonely figure walking across the yard down there?”.

yaya sanogo back from injury will be LAN

Speaking of Sanogo, why don’t we sign him on a long-term contract and make him captain? Since our captains are always injured and rarely play, this way we wouldn’t have to worry about any captaincy situation

We were told to wait for news by March or April so he still as a week to tell us he is staying for 2 more years. As if…

Well, more of the same if he stays and signs a few players, no matter who he brings

I admit to being naively optimistic, but if we won the cup as well as the big league games coming up (Man Utd, Spurs away), I could probably come to terms with another couple of years of Wenger.

He’s obviously staying anyway, but it’d be nice to at least having some semi-plausible basis for thinking that next season might be different.

I’m just optimistic that we get it together over the next month so that mean he has at least has the option to go out with his head held high.

Win or lose, Wembley could be one hell of a send off for him.

Does a manager who is going work on transfers?

To think of it, apart from Alex Ferguson and Jupp Heynckes are there any high profile managers who left on their own will in recent past? I believe both Man utd and Bayern were anyway not as dependent as us on the manager for matters like new signings. Whether AW stays or not, the club’s intention to sign a director of football is only a step in the right direction.

Depends on your definition of one’s own will. Luis Enrique didn’t get a sack at Barca but is clearly not fancied there anymore, hence the premature announcement of parting ways.

Im sure I remember from Wenger, the quote was that we’d hear about his future in in March/April. Well, March is gone and we’re quickly approaching May. Did he mean March/April 2018?

Okay, I’m feeling stupid today, so I’ll ask….. What’s the point in the stonewalling? What does it gain A : Him or B : The club. We are going to find out eventually. When we do, people will react as they react. Is he waiting for ‘the right time’ like a 15 year old dumping their boyfriend? I’m hugely confused what positives this ‘man of mystery’ thing brings to the party.

But obvious is the board has gagged him.

Wenger ever the loyal man has gone along with the decision despite the damage it is doing to his personal equity.

It’s good to hear that Wenger is working hard on transfers regardless of his future. The future of the club is most important and Wenger knows all to well that there are serious deficiencies in this squad. Serious competition for Nacho is required. The midfield needs both a Santi type technical master and a strong athletic defensive midfielder with technical proficiency. A world class number 9 remains high on the list. That’s all without finding replacements for players that now need to be moved on and players that don’t wish to be at Arsenal and of course laying ground work… Read more »

Going to be tough to attract top players if we miss out on the CL and with the uncertainty with Wenger’s future hanging over the club.

Not if we offer lot of money.

The answer to everything if you think about it. 😀

As per usual seems to be a lot more good will towards manager after two wins, but that doesn’t excuse the rest cof the season and the countless failings over the past five or so years. Nothing he can to do make me think he could win another league title. Hopefully we win FA cup and he leaves on a modest high, something he should’ve done after Hull in 2014.

It would’ve been interesting to hear his views on the French elections though.

What a load of bs. He’s said this for the last five freaking years…

Let this old man leave arsenal once and for all. Can’t you see that tactically, he has failed arsenal? Arsenal has lost control of the football than before, arsenal no longer has hold of possession as big team. Look at the way the team current has played and compare it to the invincible arsenal.. the guys here now lack confidence in evening approaching big games…the attacking force is very lackadaisical, no pressure on them so they play that way…..let the change comes now, new manager, new tactics and new spirits of approach for the game.

This is what will happen: we’ll be linked to all sorts of wonderful players during the summer. There’ll be teeets by random nobodies who claim they know someone who knows that so and so is having a medical at Arsenal. Come August 31st, we’ve only signed a 18 year old midfielder from a championship side with ‘huge potential’ and sky sports keep reporting that a ‘big signing’ could be on the way to Emirates. September 1st: nothing happens. Wenger will say: “we have Jack Wiltshire back and Welbeck has had a pre season, abd they are like new signings” Alexis… Read more »