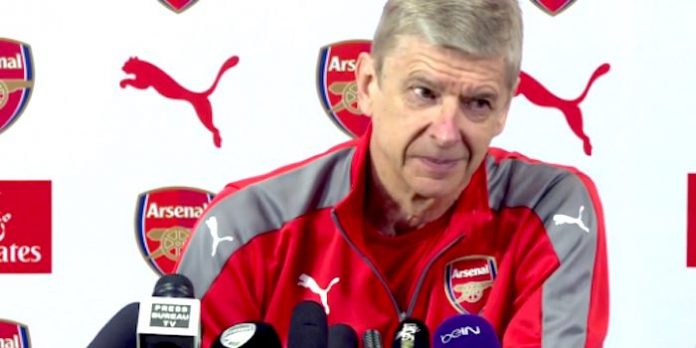 Having watched countless Arsene Wenger press conferences, we here at Arseblog News are convinced that sometimes he pretends not to hear what someone asks him, or not to quite understand, just to kind of mess with the questioner.

A cock of the head, a puzzled look, and the initially confident journalist begins to sound a bit unsure of himself.

There was a classic example of that at today’s press briefing when one intrepid reporter tried to stir up the Alexis Sanchez – Christian Fuchs incident, looking to draw the Arsenal manager into some comments about the Chilean’s behaviour after the ball had been thrown at him.

Intrepid Reporter: Have you spoke to Alexis Sanchez since the match on Wednesday about what happened? Because there’s an awful lot of negative reaction over what happened towards him on the … err … internet and … uhm … err … and the media.

AW: No, I haven’t spoken to him after the game. No.

IR: Right, is the incident closed as far as you’re concerned?

IR [stuttering]: About the … the falling … the ball in the face.

AW: Yes, err … I think so, yes. I have seen exactly what happened yet on the tape. I think he was a bit surprised, because he was close to Fuchs, you know. And overall, yes, I think he got a yellow card for it because he was too close, and Fuchs would have deserved one as well.

IR: Are you going to look at the incident?

AW: Yeah, I’ll speak with him. I’m not sure he knew exactly the rule.

IR: Well, I suppose most people would think it was rather embarrassing what happened really.

He then goes on to ask a question about Sp*rs imploding this time last year, never answering the question about whether he knew the rule or not. This makes me think he did not know the rule.

Win a copy of Mesut Ozil’s new book in this week’s Arsecast, listen below

‘But what will you do if it does the same next season, Arsene…’

I will tell you soon.

Why, that implies Alexis is here next season, playing nice football. That’s little bit tres bon news, so I will not do anything. Next!

I’m pretty sure Wenger knew the rule, but chose to be ambiguous about it so as to not incriminate Alexis. He’s very able at dodging questions and protecting his players.

Opponents may not be closer than two meters from the player taking the throw-in: https://www.fifa.com/mm/document/afdeveloping/refereeing/law_15_the_throw_in_en_47365.pdf

I’m sure the referees didn’t know the rule.. they could have corrected him before the third time.. the yellow card was for the dive..

a different George
Reply to  d_lastgenius

I am quite sure the referee did know the law, since he applied it exactly as written: It states that a player should be cautioned for this infraction if the throw is taken; the thrower’s team should be awarded an ifk. The card, and the free kick, were for impeding the throw, not for simulation.

Whether Fuchs should have received a card for aiming at Alexis’ head is a separate issue.

a different George
Reply to  d_lastgenius

From Law 15: “An opponent who unfairly distracts or impedes the thrower (including moving closer than 2m (2 yds) to the place where the throw-in is to be taken) is cautioned for unsporting behaviour and if the throw-in has been taken an indirect free kick is awarded.”

But the referee awarded a free kick, so either he didn’t really know the rule either or it was for simulation.

It’s also weird if it was for simulation because the ball was well out of bounds when Alexis felt the vapours.

There’s a small line next to the corner area as a reference. Even if you play in Ligue 5 in France, you know about this.

If Sanchez was booked for the encroachment (and most fans around me seemed not to remember the revision made some time ago) the the referee also needs to look up the rules. In those it states that, if a yellow card is issued, the match restarts with a throw in not the free kick which he awarded.

Having said all that, Sanchez looked an embarrassing idiot but Fuchs should also have received a yellow too.

*We still won the replay 2-1 though, but we rightfully earned so much class and respect

Falling to the ground after being kicked lumps out of all game, then a ball gets launched at you from 2 yards, targeting your face…. that is embarrassing?

The selective reporting and agenda against Arsenal are embarrassingly obvious.

We have a sport which is highly susceptible to corruption / match-fixing run by a corrupt organisation, certain teams getting strangely favorable decisions game after game, betting companies plaguing our screens and leading our kids into gambling/betting, but we are to be embarrassed by Alexis, a guy who gets absolutely battered every game!

People need to wake up. We are being milked.

I agree, he’s kicked from pillar to post and generally he takes it. Still though, let’s not pretend he didn’t sink like a stone and pretend to be hurt. He’s the not the first, he won’t be the last, they both should’ve been booked. Everybody move on.

a different George
Reply to  ChrisGooner

I down-voted this remark because it seems to seriously imply that matches in England have been fixed. There is no evidence whatsoever to support this. It is nonsense.

There’s a difference between proof and evidence. There is plenty of evidence to support this, including referees coming out themselves

I was embarrassed by Alexis. Can’t stand blinkered views even if they support our own players.

The alexis incident somehow rought back memories of rivaldo.

Not quite the same. Rivaldo was hit on the hip with the ball and went down clutching his face, whereas Alexis was at least hit within a foot of his face…

He hit his face I think–unless Alexis slammed his lip in a locker. Still, about as serious as my tricycle fall when I was 3 so…

No, Alexis’ fat lip came from catching a stray arm across the chops about a minute or two later.

Aguero dropped and simulated injury last night and nothing is said. What a fuss about nothing.

Alexis was breaking Leicester’s concentration and making sure his team won, whatever the methods. Playing nice got us nowhere in the last 12 years.

Wot no comments regarding Leicester’s use of Giroud as a ladder?

Yeah, that was a shocker.

My commentary team said the guy who did that was some kind of psycho in training too.

Giroud gets a lot of rough treatment from the refs imo.

Alexis who? Who is this? I don’t know him.

It’s hilarious misdirection and takes the wind out of someone’s sails. I do it quite often myself when I am at a workshop and someone is asking pesky questions.