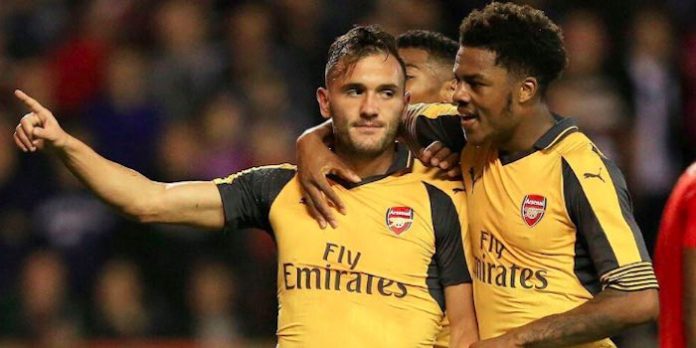 West Ham United will attempt to lure Lucas Perez to the London Stadium this summer, according to the Mirror.

The 28-year-old is known to be frustrated by his lack of playing time at the Emirates since moving from Deportivo La Coruna in the summer.

The £17 million signing has only started two games in the Premier League despite impressing off the bench and in the cup competitions. To date, the Spaniard has seven goals to his name, including a hat-trick in the Champions League, and six assists.

Reporter John Cross claims that Arsenal’s coaching staff are surprised by Lucas’ attitude towards the competition for places.

In February, Arsene Wenger admitted he had a headache when choosing from his myriad attacking options saying of the striker:

“It is true that he deserves a go because he scores goals and is a good player.”

Two weeks ago, the player responded by underlining that he has a good relationship with the manager.

So many times I felt frustrated looking at the teamsheet and seeing Iwobi was playing and not Lucas.
I won’t blame him if he leaves coz he is in the prime of his career.

when he suppose to play he got injured. Despite Theo shot comings,his putting is body on the line. COYG. ANY 3 POINTS TODAY WILL MAKE ME CELEBRATE MY BIRTHDAY AND WEDDING ANNIVERSARY…

Happy birthday and anniversary! Just don’t count on Arsenal at the moment to come to the party… As much as I hate that 🙂

Congrats mate!
Quick question, what do you write on the cake?
Wishing you a great day!

Why only have one cake? Nom nom

It’s My Birthday as well! I chose to have a meal out yesterday so Arsenal have no hand in ruining my day!

Oh No Not Again

Lucas will leave like any other player that has sense. Get out of the club while you can arsenal is a shrinking ship slowly.

ScumRat
Reply to  Oh No Not Again

Thomas Lambert
Reply to  Oh No Not Again

Shrinking ship… what a wally.

Heavenly Chapecoense
Reply to  Oh No Not Again

The rule here is that we do not tell a fan to find himself another club but if you starting telling our players to find themselves other clubs then you know what to do yourself.

ron
Reply to  Oh No Not Again

Could do with a shrinking ship. It would save on berthing fees when it’s not full of damp squids.

Seems like it could be a short lived Arsenal career alright. He’s looked impressive when played but definitely has competition between Alexis, Welbeck, Giroud and Walcott. Wouldn’t be surprised at all to see him go end of season and we recoup most of the money paid.

If Wenger doesn’t fancy him I’d take £10m to reinvest in the squad. Same goes for players like Elneny, Debuchy, Gibbs. Whether or not they are good enough Arsène clearly doesn’t rate him so it’s better to clear space and money for new players who can challenge our current first team

Trying to think of reasons why he might not have played more this season, especially when we needed an injection of something different, because I feel genuinely sorry for the guy, so there must be something we don’t know… -Is his English poor enough that he struggles communicating on the pitch? -Has he had a falling out with other players -A falling out with the the manager? -Only wants to play as an out and out striker? -Had a Kim Kallstrom-esque injury? Same as everything Kroenke, and the Wenger extension. Silence sucks for the fans. I see him joining Everton… Read more »

What do you mean, surprised by attitude? He is not whining really and providing good option from the bench

I’m keen to understand what that comment means too…..

I know it doesn’t explain every non-start, but he’s also been terribly unlucky with simpletons stomping him regularly just when he’s putting it all together. Injury stealing his momentum is just as much to blame as anything else. Yet another Gunner kicked and stomped off the pitch.

You do know most of his injuries have been muscular? I think only one was in regards to acute/contact injury.

Genuinely would hate to see him go. AW can talk himself out of many of the woes that have faced us this year, but responsibilty for Lucas possibly leaving rest solely on AW. Don’t know what more Lucas could have done to have warranted more game time, & every time he has played he has delivered. Sorry Boss, this one’s on you.

I don’t see why the coaching staff are surprised with Lucas’ attitude. I don’t see anything wrong with his attitude. Besides he has done well whenever called upon and most agree that he should have played more.