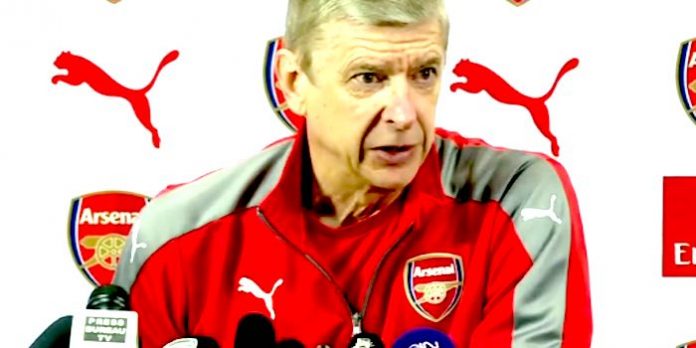 Arsene Wenger says his focus ahead of this Sunday’s North London derby is on his own team, and he refused to comment when asked if Sp*rs might do a Sp*rs at the end of the season and implode.

The Arsenal manager knows his side need a win to keep their slim hopes of finishing in the top four alive, and with that lot trying to keep pace with Chelsea it’s a derby game of great significance.

When quizzed about whether the pressure might get to Mauricio Pochettino’s side, Wenger said, “No. I focus on Arsenal. What will happen to Spurs, it’s not to me to comment about that.

“I have to focus on what we can do and how well we can finish the season. We have big Premier League games, we have an FA Cup final to prepare for, so we have to focus absolutely on us and not expect any weakness from our opponents.”

And in terms of the fare Sunday might offer up, he continued, “I expect an open match, a committed match, a match with high pace.

“There could be goals because both teams play positive football, try to go forward and play in an offensive way.

“Normally that finishes with goals if you look at the quality of players on both sides.”

Having spoken earlier about how one season does not represent a shift of power, it’s now down to the Frenchman to get a big performance out his team for the final derby at White Hart Lane in its current state.

More derby chat, and you can win a copy of Mesut Ozil’s new book in this week’s Arsecast: listen below

Power shift? Mind the gap? Heard it all before. Sure they will probably finish above us for the first time in 21 seasons but THATS IT!! No trophy for that. Just bragging rights for the summer. Whats the chances of a last day st totteringhams day? Lasagne please with a toon fake goal and a toon 5-1 win with 10 men whilst relegated on the side. Anythings pssible untill its impossible.

It’s not just about our chase for top four or their chase for the title. There are two much more significant reasons that make this derby absolutely massive. It is the last ever North London derby at Shite Hart Lane. Massive! But even more than that, a win for that lot (*shudders*) would confirm the Spuds equivalent of St Totteringham’s Day. Now Can you imagine them celebrating that day on the last North London derby at SHL? Ugh! On the other hand, us winning the final derby there and effectively denying them the title would be a wonderful beautiful thing… Read more »

Massive test for us.we won’t make top 4 and spurs won’t win the title regardless of the result but this game is a about pride and about the fans.
Show some fight and some of what’s happened previously may be forgiven but a palace or wba performance will be unforgivable.

Nonsense, we have every chance of making the top 4. And I believe we can take down Spurs on Sunday. COYG!

Every chance? Not quite, but we have an outside chance

Every chance if we win against them.

Heheh top four is a trophy. Qualify for the champions league to he knocked out, just like it happens every season. That clueless failure has infected the fans with the mediocrity virus.

A man can only dream

Not related so feel free to shoot me down but I have always found it quite curious how Wenger often comes out with how so and so player was close to joining or was heavily scouted. I’m always confused about why he comes out with it, doesn’t it just make us look inept in the transfer market?

Are you saying this in regards to his comment that we were scouting Dele Alli while he was at Milton Keynes? He was asked. And also, I don’t think he said something in the sense that we were close..

Isn’t St Totteringham if we achieve top 4 plus the FA Cup and Spuds only qualify for being eliminated at CL group stage next season ?

I know Wenger is downplaying the shift in power, and I agree in as much as one year doesn’t mean a great deal, but we will have to be very careful. Strikes me that they have a board talking ambitiously about the future, a new stadium on the way, an excellent manager, etc. Of course they are still behind us but continued passivity from those at the top of our club will see that change very fast. The announcement that they are to play at Wembley all next year fills me with some hope as they have regularly and hilariously… Read more »