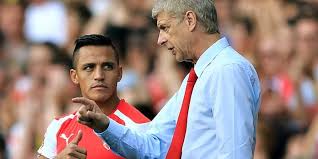 77 – Goals scored by Arsenal this season. This is the highest goals scored tally of Arsene’s tenure since 2004/05 and the 4th highest of all his seasons at Arsenal

44 – Goals allowed by Arsenal this season. This is the highest goals allowed tally of Arsene’s tenure since 2011/12 and the second worst of all his seasons at Arsenal. Incidentally, 2011/12 Arsenal conceded 49 goals and that was the season Arsenal needed to finish 3rd to guarantee Champions League play and did so on the final day thanks to a Koscielny winner v. West Brom.

10 – Penalties conceded by Arsenal this season. This is the most penalties Arsenal have conceded in Premier League history.

24 – Goals scored by Alexis in the Premier League this season. This is the most goals a player has scored for Arsenal since Robin van Persie scored 30 goals for Arsenal in 2011/12. That was the season before he joined Man U. Unlike that season Arsenal had three players in double-digit goals scored this season (Alexis, Giroud, Walcott) and in 2011/12 only van Persie scored 10 or more goals.

6 – Headed goals by Giroud (3rd in the League behind Benteke and Llorente with 7 each). Lukaku also scored 6 goals with his head this season and 7 with his right foot and 12 with his left. Lukaku’s 12 left-footed goals was the most in the League this season.

10 – Assists by Alexis in the Premier League this season (led Arsenal, 5th in the League). In the season which RvP scored 30 he also had 10 assists.

5 – Alexis assisted Özil 5 times, this was the third most common assist combination behind Eriksen to Kane (6) and Sigurdsson to Llorente (6). Alexis’ stat is unusual because the other two recipients (Kane and Llorente) are the top scorers on their team. This same pattern continued below with de Bruyne to Aguero (5), Fabregas to Costa (4), Mirallas to Lukaku and etc.: all players assisting to their team’s top scorer.

136 – Tackles by Idrissa Gueye this season (led the League) of 186 attempts (73%). Second best was N’Golo Kante. Gueye followed last season’s 4.1 tackles per game with another outstanding 4.1 tackles per game. Arsenal’s most prolific tackler was Monreal with 90 of 139 (65%). Xhaka only had 76 tackles of 118 attempts (64%). Needless to say, you don’t really want your left back to be the most prolific tackler on your team: you’d rather have a midfielder.

90 – Koscielny led the League in interceptions with 90 (tied with Kurtis Davis). Monreal was third with 89. This is a style thing with Wenger, he wants his center backs to attack passes and they are often in the top of the League stats in this category.

114 – Cech was 6th in the League in saves.  The top players were Burnley’s Heaton, Sunderland’s Pickford, Watford’s Gomes, etc. The worst teams in the League. Lloris made the most saves of any of the top four teams with 78. I’ll talk about this more this summer when I have more time to look at the numbers.

128 – Alexis was dispossessed 2nd most in the League behind Zaha. Arsenal’s second most dispossessed player was Bellerin with just 42. Though, it’s pretty awful for your right back to have such a high number of turnovers.

94 – Alexis also led Arsenal with 94 unsuccessful touches, this was 4th most in the League. Özil was second at Arsenal with 63.

Like I hint above, there will be more articles this summer. Each will be more focused on a specific stat. I’ll also do some “scouting” articles though I do want to point out how silly it is for some stats guy, any stats guy, to use the data available from Opta and pretend that they are getting the scoop on a player (“I found this guy two years ago” LOFL). By the time a player has Opta data available to the public that player is already well known by all the scouts in Europe.

10-penalties not saved by cech..

We need a goalscorer or can we rely on Welbeck to fire us next season to the title.
Walcott, Wilshere, Jenkinson, Debuchy, Gibbs all needs to be sold and their salary should be added to Ozil and Sanchez respectively. We need only one Pacy AF like Griezzmann/Rues, that can link the play with Alexis & Ozil.

The numbers seen to say defense is the problem.

Last year attack was the problem

Defense was the problem before we shifted to back 3 and we have conceded goals mostly on counters when we are trying to score. If we have enough quality in forwards, then our defenders wont need to run forward everytime to score a goal. Also how many goals we have scored against the top sides away which is our main problem. We need to have a free role to Sanchez, like what Hazard has at Chelsea. But for me 1st goal is important and I believe if we get the 1st goal against all the teams, then the back 3/back… Read more »

wont mind if Wenger gives, Lucas Perez a start at wings, and play Alexis at CF to see how it goes. with Bellerin and Kolasinic at wing.

I dont think he would change much at the start of next season, though might sell many players to clear our wage bill.

The numbers do. But they dont tell the whole story I think. I would love to see 2 stats if anyone can find them: goals conceded from counterattacks/turnovers and chances created per game. Arsenal this season seemed unable to control games. Even during that early unbeaten run. This doesn’t mean that that the team didn’t have possession but that the team never looked to be comfortable in any match. There were matches where there was a lot of possession but not many chances being created and matches where chances were being created but the ball was constantly being lost in… Read more »

I will always wonder about Lucas if he had been given the chance.

What we really need is an ambitious owner and a tactically genius as manager. Thats been the case for many years now and another group of different players wouldnt change it

Strangely, the sun still seems to have come up this morning. Bit of a second tier European type of sun, but still…

These are interesting numbers.

Please pay attention to the min’ play this season including the international games in your articles this summer.
What i saw there was incredible – Koscielny 4108(!), Ozil 4045 and Sanchez 3889.

I find it encouraging that Wenger held talks with Bakayoko. It atleast shows intention.

Wenger also held talks with Alonso, Toure, Kante etc. Not sure what “intention” counts for tbh…

Maybe finally the Cech lovers will see the numbers and realize that he is not good enough anymore. I bet even Ospina’s numbers per game he played will be better. But Wenger and many fans will still remain delusional before past glories.

so it was his fault that the defence allowed around 50% more shots on target than the other top 5 times?

Cech numbers tells you that we are letting too many shots. Therefore it is common sense he made 1 or 2 mistakes more than for example Lloris. And as for Ospina he is not near Cech. His positioning and communication are not at Cech’s level. Most saves Cech makes seems easy and not flashy because of positioning. In those few games how many times Ospina had to deal with 1 on 1 situations. There surely must be a problem in communicating? With Cech in goal we would have never lost 5:1 in Bayern games. Ospina could have done way better… Read more »

Based on a quick calculation, Cech’s saves / goals ratio was second only to Lloris of the top 6 teams. When you factor in that he faced 10 penalties, he doesn’t seem like the weak link.

Granted, he had a period of a few months where he was average – as did everyone – but he’s been exceptional for the past month or so which is encouraging for next season.

* that should say top 5 teams

Just a quick question which may or may not be relevant to this argument…..how many of those penalties did Cech himself give away?

Cech gave away penalties against Hull and Sunderland (the latter after a Mustafi error let Watmore through on goal).

For what it’s worth, the league average (since 92) is for 11% of penalties to be saved. So really we can only say that he should have saved 1 of those 10 penalties.

I’m not trying to be his cheerleader, but surely one of the priorities this summer is to offload the mentally weak players that lack drive. Cech is the very opposite of this. We need people like him around.

a different George
Reply to  catbiscuits

I think the overwhelming majority of those “saves” are poorly taken penalties. No keeper can save a hard shot into a corner, even if he guesses correctly.

I hysterically laughed so hard at the second paragraph.

These Kroenke clubs charts though. WHAT THE FUCK!!! Still the reporter dumb enough to write that second paragraph ?

I hope I dont ask too much! 😉
Defense would seem to be the obvious area of concern!

What’s the stats for number of teams who implode in second half of season in which their top 2 players stall on signing new deals with 18 months of their contracts left?