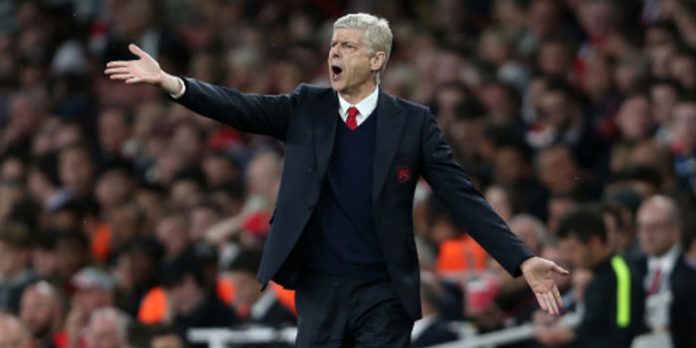 Arsenal kept their top four hopes alive with a 2-0 win over Sunderland, however, we’re going to need a helping hand from Middlesbrough and Watford on the final day of the season.

A second half brace by Alexis Sanchez ensured the Gunners surpassed last year’s points total but we remain one point behind fourth-place Liverpool, who will host relegated Boro on Sunday, and three points behind Manchester City who will travel to Watford.

Speaking to Sky Sports after the game, Wenger upped the ante on Jurgen Klopp and Pep Guardiola.

“Liverpool and City are still in it as well,” he noted. “They go to Watford, it’s a difficult place to go. What you want is that everybody fights like Sunderland did tonight, then you accept your result.

“Sunderland, you have to give them credit, they did tackle for every single ball, they didn’t try to waste time when it was 0-0. They really had a fight.

“We have never given up. We’ve had a difficult period but we’ve recovered from that and it says a lot about the strength of the team. I believe there’s a lot of positive ingredients there, so let’s finish well on Sunday, then it’s the Cup Final. After that we’ll see where we stand.”

Tonight’s match was played out in front of many empty seats, something the boss also took a moment to touch on although he didn’t seem overly fussed.

“We have to focus on our job and not focus too much on how many people are in the stand. When you are a football player you want ideally to play in front of a packed stadium, but we are quite spoiled with that at Arsenal.

“It’s a Tuesday night, maybe people thought it would be an easy game and we had less people, yes.”

Surely better to use a bit of reverse psychology and tell them they are as good as CL (which they are). Also maybe he should mention Boro and Watford are rubbish…particularly Boro (which they are). At least get them riled up from their deck chairs.

Why they would announce 59K attendance is beyond me. Just shut it and say nothing. Bleeding obvious we have hemmoraged quite a few fans from our own holiday consequence from January.

These are people who are paid plenty of dosh and haven’t got a clue.

Squeaky bum time…
Pep is struggling with the media- so the more of these comments from Wenger directed at him the better.

“up. We’ve had a difficult period but we’ve recovered from that and it says a lot about the strength of the team”

““It’s a Tuesday night, maybe people thought it would be an easy game and we had less people, yes.””

Really hope we somehow get 4th but it’s hard to be motivated for this year’s top 4 more than any other.

Important to appreciate the win but that first comment got me too. Would be marginally less infuriating/ disappointing if he just outright said “we’ve been awful for the past couple of months and we’ll look to address it next season. We know it’s been massively disappointing and we’re sorry.” I hope it’s just to protect the players but at this point i feel we’re more deserving of his attention than they are, reeks of a ‘head in the sand’ mentality.

It is not harder to be motivated. We’ve got more to lose this year as a club. The only people happy to see us miss out would be some sourpusses racking up airplane fuel costs and Jose.

Yes that would be the reason Arsene, it’s a Tuesday night. Nice to see after all the stress of these last few months, he’s still got banter.

…and maybe people got fed up of shelling out massive sums of money to watch our team consistently fall short of its targets. Don’t get me wrong, I’m pleased we’ve been picking up lately, but it’s disingenuous of Wenger to pretend that people stayed away because it was a Tuesday night or because of the opposition. If we’d been playing for more than a fading hope of 4th place, the stadium would have been full.

“shelling out massive sums of money to watch our team consistently fall short of its targets.”

Gotta love how this guy gives answers…“It’s a Tuesday night, maybe people thought it would be an easy game and we had less people, yes.”

Hmmm, someone is trying to get into someone’s head.

I doubt City have got any worries. The goal difference makes them just out of reach even if they lose against Watford.

We need to rely on Middlesbrough parking the bus and snatching a draw.

City will annihilate Watford. The best we can pray for is a Boro draw. I’m resigned to us coming 5th.

“No it’s Tuesday night against Sunderland, everybody expects us to win. I didn’t count the number of people who were in the seats. We are sold out,”

WE ARE SOLD OUT??? What the fuck??? I think Wenger has made it his mission to piss as many people off as possible…

Not surprise by his comments the man never admits his failures. Don’t worry same shit for the next two years.

There\'s only one Dennis Bergkamp
Reply to  Rico

You mean the man who moans about the media, the fixtures, the fans and pushes his players under the bus when things go wrong. That’s Mour… err Wenger for you.

Dan Hunter
Reply to  There\'s only one Dennis Bergkamp

Are you seriously saying Wenger does not complain about referees, about fixtures, that we have injuries etc etc…

Even when things are very unfair on him and the club he stands tall and faces it. Best of all… even when he says fuck off to the fourth official he oozes class. (Say it out loud: You are dishonourable to your federation.) He is human and not without his flaws but he is a better human than most people I know (about), let alone football managers.

Seems to me that is your mission mate.

Why say things that are clearly not a reflection of reality, in other words, lie? Does that increase or decrease your respect for a person?

I would respect him a lot more if he came out and said, yes the numbers were not there because we have obviously not done very well this season, and for that I would like to apologize to the fans

Lie! Hahaha. You are stretching what he said like a rubber band and you might get a nasty surprise if you aren’t careful. He hasn’t apologised sure but it’s even more of a personal call than agreeing to a new contract. After all no one has died or been relegated. It is only football. Some seasons are better some worse. He HAS said what a shit season this has been though. It is obvious what he has had to face and the toll it has taken on him. You can chose to ignore it and keep wishing and demanding and… Read more »

And then he almost veered the car off the road and told his agent let’s fuck off to Chelsea.

It would be the spursiest bottle job ever if liverpool drew with middlesbrough.

Just take as many out as you can Chambo – start with Coutinho!

Can we start a petition to sign Coutinho next season. I know we don’t lack in attacking midfielders but god he’s so good.

A part of me really hates that mathematically we can still get champions league because when we miss out on final day we are going to hear the same old crap “we recovered the season well”, “we were so close”. Just tired of hearing the same old rhetoric.

“we were so close” – now you’re just making that up. Wenger would never say that as it’s patently not true even if we did make the top 4. This season has been a shit sandwich, yes, but we don’t need to act spoilt about. We are dissatisfied, yes, and let’s articulate that properly.

wenger said we were unlucky when we lost 5-1 to bayern.

Maybe he should do some beatboxing for a change no?

It would sound muffled with your head so far up his arse.

We should have scored and least 4, so the GD with city be 3-.

If some miracle happen and city lose 1-0 we need to score 4 against everton.

Isnt mancs more or less guaranteed top 4 already, with a goal diff of 10+ ahead of us n 3 pts ahead us? Liverpool though… if they get nervous…

Liverpool are just so unpredictable against the weaker oppositions. Let’s hope they surprise us more by dropping points against Boro. I’m still optimistic.

arsenal should first focus on ts game and then wait the result from the two sides. but I think top 4 will remain the way it is now. so,arsenal is gonna play Europa league next season. I know Liverpool knows what it wants though with a lot injuries but it has fought up to now en it will win against boro.

I don’t think a victory against Everton is a certainty. Focus should be on our match rather than things we can’t control. We owe Koeman an ass kicking for what they did to us a few months back.

This. We just need to wallop them, top 4 or nay. It would give me an odd sense of satisfaction