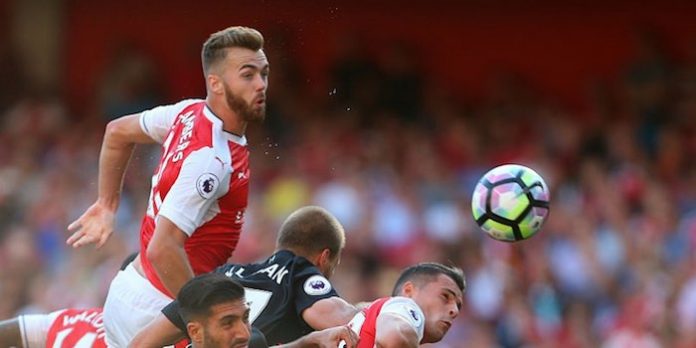 Calum Chambers has refused to comment on his Arsenal future, but waxed lyrical over the influence Per Mertesacker has had on his career.

The 22 year old spent last season on loan at Boro, and declined to comment on whether or not he’d be an Arsenal player next season, but he did find time to praise the club captain for the way he’d helped him since joining from Southampton in 2014.

Many people had written the BFG off, but he basically disembowelled Chelsea in the 2-1 FA Cup final win in May, and Chambers is grateful for how he looked after him after he joined the club.

“In the last few years he was my mentor,” he said. “I’ve never seen such a professional, dedicated player, I’ve learned from him every day.

“He kept me on track, reminded me of the little things that brought you where you want to go. He’s a great guy.

“To learn from such a player and such a personality – I could not have done better. I just got better because I could train at his side every day.”

Basically, if you don’t like Per Mertesacker, there’s something wrong with you. No doctor can cure it.

Just live out your life in misery until death takes you, after which a dolphin god will make eternity miserable.

Hope he stays to link up with Per again. He can learn more at Arsenal than anywhere. The future is bright, the future is red-and-white.

Regardless to how highly rated mertesacker is to literally everyone he’s ever played with and every coach he’s played under, you’ll still get idiot pundits who criticize his lack of pace, and Arsenal for not letting him go.

I say even if he doesn’t kick another ball for arsenal keep him at the club at any capacity. Such an unbelievable professional and is a role model for any young player.

I’ll never forget his FA Cup final performance against Chelsea, just sums up what an unbelievable professional he is.

127 mins of football all season. More trophies than spuds. Says everything. And he was sen-f*cking-sational against chelscum

Best you can learn from. ..

If, after successful loans campaigns, we decide to part company with both Szcz and Calum, you’ve got to wonder what the point is in Wenger loaning out players in the future. Loaning them and then selling them at a loss, regardless of their spell away from the Emirates, is counter intuitive and nonsensical.

Who’s being sold at a loss now?

With the rumour price, and the talent both have. I would say it a loss too

The kind of dependable keepers like szezny don’t come along too often. He is being targeted by teams like juventus. In his case his prime Years are still ahead of him and he’s familiar with arsenal as well. If we let him go and that too for as cheep as 5 million then what’s the point of investing all those money and effort on him. And emiliano Martinez with all due respect is not even close to him in terms of talent and experience

For sure he (Chambers) is staying, way too early to let him go yet. He’s very mobile for a CB could work great in a 3 at the back system. I see him as a future captain one day.

Haha I thought the last two paragraphs were still Chambers talking. My god I’m an idiot

What makes you think it wasn’t?

Another addition to the everlong list of reasons to love the BFG.

I like Chambers, it I don’t know if Wenger does anymore. I wouldn’t be surprised if the lad was sold this summer, but I would be disappointed because he seems to have something about him. He just never seemed to recover after that match away to Swansea.

I would maybe sell Gabriel (I just don’t trust him for some reason) and keep Chambers this season. Definitely has alot of potential

Hope Chambers stays he will fit in well in a back three and game time in the Europa lake alongside Mert and Gabriel for me.

The last 2 paragraphs are all that ever needs to be said about Per.

Not even Chambers wants to stay 🙁 I thought he and Holding could have been a great partnership for Arsenal and England.

“I just got better because I could train at his side every day.”

Switch him back to a Rback/RightWback.

That’s where he thrived at Soton.

We already have Holding in the centre along with Koscielnt, Mustafi and Gabriel.

Wenger needs to stop trying to convert Calum to the middle. If it evolves later on great but right now, he should back up/ act as alternate to Bellerin when in 4-2-3-1

This is fake though. He says he’s had him as his mentor for years, but he only joined arsenal less than 12 months ago…