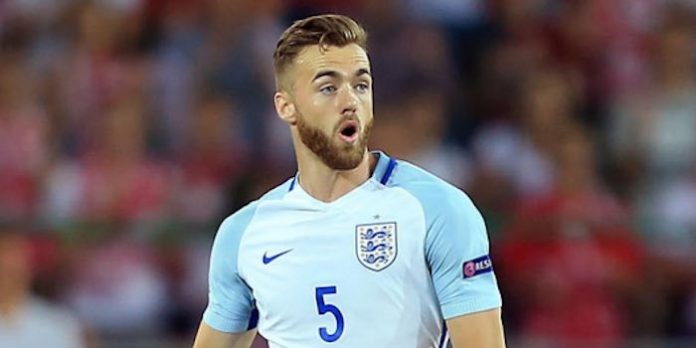 Calum Chambers says that being relegated with Middlesbrough last season left him ‘gutted’ but that the season long loan with the Teessiders* was a valuable experience after his Arsenal career had hit a kind of sticking point.

The 22 year old, currently shining for England at the European Under 21 Championships, will return to North London after the tournament and some holidays, confident he’s improved as a player.

“This season has been so important for me, playing games as a centre-back,” he said. “The experience I have gained in that position just from playing is so valuable to me.

“I just feel it’s just pushed me on another level. I want to have a good tournament anyway and I’m focusing on here.

“If I have a good tournament it’s great and I’ll be going back to Arsenal for pre-season and doing the best I can and seeing what happens.

“It’s been a very good season for me. I gave absolutely everything to try to get results and keep Middlesbrough in the Premier League. Unfortunately I couldn’t do that and I was gutted.

“We have to see what happens. I’m an Arsenal player and I’ll be going back in for pre-season and concentrating on that but at the moment my focus is on England and beating Germany.”

England play Germany on Tuesday, and a win could see Chambers face Arsenal teammate Hector Bellerin in the final if Spain can overcome Italy in the other semi.

Over the recent years we have invested a lot in our youth players. And now when the time has come to reap benefits of that investment there is a lack of clarity on their futures. Players like Chambers, Szczesny, Ox if their future is not sorted out, I feel we might come to regret it.

The one key problem is that with the exception of Szczesny, all of them are very average.

Great experience, he got a lot of playing time and, given the weakness of Middlesborough, lots of action in each match.

When he played, he was excellent – forming a solid partnership alongside Ben Gibson towards the end of 2016, when Boro were comfortably clear of the drop zone.

But has endured an injury-hit year, missing 10 league matches in 2017 – and Boro failed to win any of them. Leaves with his head held high, returning to Arsenal with every chance of nailing down a first-team place.

Didn’t knew that Per owns a newspaper in Middlesbrough ?

John Terry is a cunt

Lacking the enthusiastic “I want / intend to / fucking well will come back to Arsenal and claim a place” that you’d like to see, but sadly he probably would prefer to play for a smaller team all the time than for Arsenal sometimes.

In the photo, is Calum

If we sell him and keep Gabriel I will be very unchuffed.

If we intend to play a back three, at least as the default option to start the season, then it makes zero sense to let him go. With Per, Kos and Nacho all aging, and our penchant for injuries, he’ll get his chance in that formation, and he should be excellent in a back three.

definitely should keep him.
first choice back 3: mustafi, kos, holding
back up choices:
1) chambers
2) monreal
3) per
4) gabriel

kos has a long standing injury.
per is in his final year.
gabriel is suspect.

I have a feeling that if he sticks with the 3-5-2 system then his preferred three will be Mustafi – Koscielny – Monreal with Kolasinac & Bellerin as the wing backs.

Chambers & Holding will get plenty of game time in the Europa, league cup & FA cup & of course cover for when players get suspended & injured

searched out a Middlesbrough end o season playr review and they gave him 7/10 noting his superb run of form only tainted by injury causing him to miss 10 games.

all in very positive.