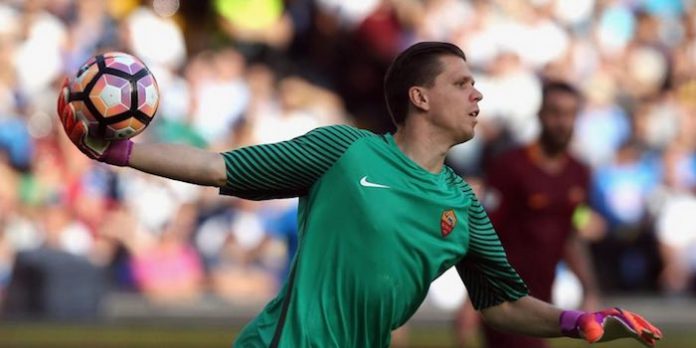 According to Gazzetta dello Sport Juventus have made a bid in the region of €4-5m for Wojciech Szczesny.

The 27 year old has one year left on his Arsenal contract, and his future remains unclear after two seasons on loan with Roma.

It seems clear that the Polish international is a target after comments made by Gigi Buffon, but they’re not exactly pushing the boat out to get him if that’s what they’re offering.

Szczesny kept more clean sheets than any other goalkeeper in Serie A last season, and even with just 12 months left on his current deal is worth a hell of a lot more than that.

Such is the derisory nature of that bid, Arsenal should simply refuse to deal with them any further and if they keep coming back with other offers, take out a restraining order.

As a club we haven’t exactly been great at getting decent fees for the players we let go, and our modus operandi in recent times has been to let players go on loan to the point where they’re sold on the cheap or leave on a free.

Szczesny, however, has matured as a player and a person during his two years in Italy, and with Petr Cech now 35 and David Ospina a likely departure, he’s a player we should keep and offer new terms to.

€4-5m? You wouldn’t even get half of George Wood for that these days.

I suggest we bid 30 Bon and a box of used Kleenex for Dybala.
Sorry Juve, you started it….,

Who made the rule; All players on the planet to be hidiously overvalued, except any Arsenal player.

Arsene should fly down to turin anx say you want woj? We want dybala!

No, I think that’s what the other side bid, I think….so 2 low ball bids, neither likely to be accepted. Quite right.

5 dollars and 10 cents for Dybala.. come on Arsene you can do it!

The original 14m price tag was nowhere near his valuation, so you can fuck right off with a 5m bid

Meh. We might be a touch soft, but Juve can f*** off with that bid.

The club that bid £8m for peak Van Persie let us not forget. Cunts

They can have Cech for that and we will keep Szcz

The world’s best negotiating team versus the world’s most generous. This should go well.

“Daddy, why are all the signs at The Emirates written in Italian?” the little boy asked his father.

“Because a man named Dick Law sold the stadium to Juventus for a handful of magic beans, son. He wasn’t supposed to, but he said that the offer was too good to turn down, and as it was Ivan Gazidis’s day at the spa, his phone was turned off and no one could reach him. Now they own us, my boy. Let that be a lesson to you. Keep your mobile on.”

And they dare play hard ball on selling anyone, fck off the bid is just disrespectfull

Trouble is us always getting in the last year of a player’s contract. Either way we get mugged. If a player wants to go then he knows we will sell cheap or he can wait a year and we’ll still play him or loan him to free up space. If they want to stay, well Theo has squeezed the water out of the rock in us and the ox is about to in terms of wages. Maybe we need that other “football sporting whatever name will please Arsene ” director to sort it out. If a player won’t sign sell… Read more »

We’re the Rodney Dangerfield of football clubs, we get no respect, no respect at all.

He get’s all my respect! “Last time I saw a mouth like that, it had a hook in it.”

But we get no respect. For all AW laughs off director of Football, this is why we need one. So we can become the best negotiators in world footy, not the worst.

And what would a Director of Football have accomplished? Actually if you look at our record of selling players, it’s pretty good. Selling players to a a foreign team is an entirely different matter because of the disparity in wages being offered, meaning that foreign clubs cannot afford to pay the “market value” of players who have played in the Prem. Really has nothing to do with a Director of Football, it’s just simple logic. Also players choosing to run down their contract so they have one year remaining and a better bargaining position is more indicative of the player… Read more »

You got my point in your last sentence. The point is that football these days is big, high value, high stakes business. And that it is just completely unrealistic to expect one man to be a coach who can compete with the likes of Conte and Pep, while at the same time be a negotiator who can go to battle with the top professional negotiators across Europe, while at the same time be the incredible diplomat to manage the relationships with all the crazy egos of every player and agent out there. AW needs serious, professional help with each and… Read more »

Juventus paid what – 75 m gbp for Higuan last year? pretty sure they can afford 15m for a new keeper. Wenger simply needs to make decisions much earlier as other clubs do – if a player won’t resign then you sell him with 2 years remaining – not 6 months before they can sign a pre contract. it happens with so many of our players that its clear we are an extremely poorly run club from a contract and transfer aspect.

I hope Wenger can get Szczesny to sign a new contract with the club then he can tell Juventus to fuck off.

If Szczesny was one of the best keepers in the league he should be worth at least £20 million to me if not more, come on Wenger get a new contract on the table for him.

Sammy Dubzz
Reply to  Wright on the money

Imagine Everton agreeing to sign Pickford from Sunderland for £30million

4-5m sounds reasonable if they include dybala as part exchange in the deal.

Fuck the Old Lady if she’s going to be so cheap … bring the man home.

At some point Wenger needs to simply take a stand with players and clubs and tell them that they will not be leaving unless the price is met. Right now our modus operandi is simply we will cave and everyone knows it.

Can’t help but feel the fact the club administrator(s) let player contracts run down like this puts us in this weaker position allowing other clubs to low ball us on price. It’s our own fault.

Well now that should be the end of that if we’ve got any sense at all.

Disrespectful to the player and club.

Counter with 40mil + Szcz for Dybala

Don’t worry, it’s a typo. They forgot the zero.

Juve got to be kidding me

They can barely get an Ospina for that.

We should be keeping him to compete with Cech. I don’t think we should have an issue if Szsc was performing and started ahead of Cech. That said, I think the issue on cheap sale is Wenger doesn’t believe its worth the money to have a disgruntled player on the periphery if they can be moved. Hence Gnabry, Ospina. Sure we can keep them and forced the issue but it will be no benefit to us if they transmit their misery into the squad. It would be no benefit to their careers either. So it is an existential issue to… Read more »

We get the respect we deserve and this is a direct consequence of our lack of ambition. We show no respect for the ambition of our players and they in return don’t commit to a new contract. If this is true, the bid they’ve made reflects the players desire to join them and complete lack of desire to re-sign with us. I expect a few of our players to leave this summer well below their replacement value and that’s a direct consequence of giving Wenger a new contract as i’m certain had we employed Allegri or Simeone our players would… Read more »

I’d be sad to see Szcz leave. He’s a Gooner. Loves the club and is an undoubted talent. He shared the Golden Glove with Petr a few seasons ago. He’s still only 27!? Seems like he’s been about forever and could still be around for another 8 or 9 seasons!

Maybe he doesn’t want to come back to play second fiddle to Cech? But Cech is not going to be around for long. I think we should fight to keep him. Fingers crossed!

Bring the pole in goal back and tell juventus to poke it!!!

This is bullshit from Juventus. We should simply not respond, not now and not ever. Cunts.

Honestly haven’t seen why cech is one of the top ten keepers in the world since he joined from the chavs. His ability is world class, his form is not. I think szczesny has shown good form in the last 3 seasons but is just shy of world class ability. Ability can be coached though.. And in my opinion form is pushed AND backed up by competition. If you honestly had to pick between cech and szczesny for the next 3-4 seasons who would you choose? Because cech is getting slightly worse and szczesny is getting better and in a… Read more »

The guy’s a very good keeper. Golden glovr in italy last season? And the season before he left didnt he aldo share the golden glove with petr? The thing bout Arsene is that he has this auality of loyalty about him (oh how we all secretly wish more people at our workplace are like that?). People who have stuck by him, like aaron, he keeps faith and continies to play. People who betray his trust – puffing woj, puffing jack who wanted to go to bournmouth, homesick fab whom he had the option to take back but refuse i think… Read more »

I totally get your man love for wojciech blogs(quite strangely you rate him more than ospina) but he’s not a world class keeper.That offer is just about his value.we should cash in seeing as no other club is interested in him to initiate a bidding war.

Is it the pack of Marlboros in his bag that separates him from being world class? Looks like he ticks all the other boxes.

This is how negotiations begin folks.

What are they smoking over at Juve???!

5 Mill? i will force him to stay one more year till he become free agent rather than sell him for such a low price.
At least we’ll have a good back up keeper this season.

Am I the only one who actually wants him to stay at arsenal? I’ve always liked him, and he’s had clean sheet records in both England and italy now and he’s still not in his prime!