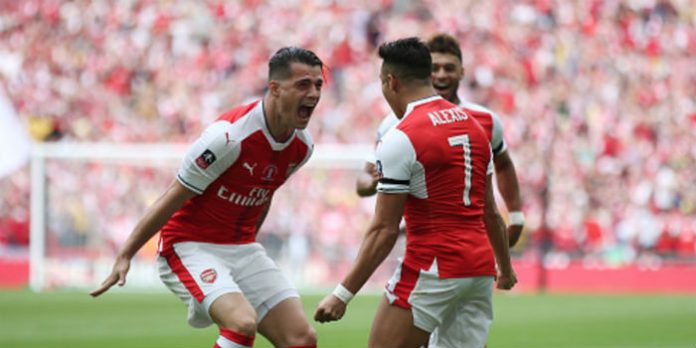 Speculation is rife that the Gunners’ star duo, who are both out of contract at the Emirates in 12 months time, could be sold when the transfer window opens next month.

It’s a situation that threatens to cast a shadow over Arsene Wenger’s shadow with Xhaka admitting that Sanchez has the qualities to play for any team in the world.

“He has qualities on the pitch which are incomprehensible. He has made many goals, and is also enormously important outside.

“Alexis can play with every world team – just like Mesut Ozil.

“I have been able to play with many great players, but these two stick out.”

On whether Ozil will stay, Xhaka added: “I think so. I owe him a lot, he helped me a lot at first.”

The 24-year-old also reflected on his debut season at Arsenal; one that ended with him making 46 appearances and an FA Cup medal.

“I had the second most games in the squad, I couldn’t expect more personally.

“Unfortunately, we have missed our goal of coming in the top four, although we have made four points more than last season when Arsenal finished second.

“But I think we can be satisfied with the last third of the season, and winning the FA Cup has given us and our fans a bit more.”

Be right Granit. Please be right…

I am not entirely convinced that he will leave you know. Bayern appear to have been put off by his wage demands and I can’t see us selling to a PL rival. He could see out his contract and then go but then he will be a year older and will probably not command quite as much in terms of salary. He may take the view that actually he can start earning a large amount straight away. I know he is not purely focused on money and he wants to win things but he has won quite a bit in… Read more »

Good lad. Picked up during the season so can start from a good place next season.

3 CBs helped him stay on his feet and avoid as much tackling. His quick medium/long passes were excellent especially towards the end of the year. I hope we stay with this formation.

Says it all that the goal was to reach the top four. Granit has only been here a season and he knows the drill…

I think it’s a case of once the title was out of reach the goal was to at least get in the top 4.

Keep in mind that this is a translation.

You can never be sure, but I’ve seen enough from Xhaka to think he will be a mainstay for many years.

I’m not so sure, he doesn’t seem injury prone and has a good work ethic.

Too cynical for me.

I can see Ozil staying as no clubs are after him but Sanchez will go I just hope it’s not to City or another premier league club.

If Sanchez is going now is the time while we can try get what money we won’t for him after a great season and before he can go for free.

Just hope we can get the right players to replace them if they go.

Alex
Reply to  Wright on the money

No club SEEMS to be after Özil, but you can’t seriously think that no club would like to get him if he were to be available.

Wright on the money
Reply to  Alex

There are better players, younger and maybe cheaper than Ozil out there.

Zyrth
Reply to  Wright on the money

Isn’t transfers usually kept secret from the public? I mean I personally don’t subscribe to what the rumor mill churns out.

At 1st discipline was an issue…now hes sorted that out i dont think he gets the praise he deserves as one of a few positives of the season…his passing and eye for a pass is second to none….hopefully only way is up for him to be one of the first names on the teamsheet

Martin
Reply to  Paul b

I personally liked him right away. Unfairly criticised and still not appreciated in some quarters. I think he willl turn out to be one of Wenger’s best buys

Thumbs down proves my point.

Yeah the 1 thumbs down really proved your point.

That was an early response. I’m pleased I was wrong.

Alexis should stay with Ozil to make the team firm.

Thank you, I’m here every Tuesday, matinees only. I recommend the veal.

I feel the club will resolve to try and keep one of either Ozil or Alexis. The former looks the more likely as the latter has plenty of suitors for his energy and endeavor. What worries me is the numbers Wenger is talking about coming in. Wenger is generally excellent in the market but he fails himself in being over conservative or over hopeful on internal development and not getting that extra one quality player each season. Last season it was midfield that was slightly short with Jack going out on loan and reliance on Santi staying fit. This summer,… Read more »

”Wenger is generally excellent in the market”, you mean the underestimated no-name players market ? In terms of proven players, it has only been Sanchez, Ozil and perhaps Arshavin over a period of 13 years. You said we were short in midfield because Jack was loaned but the reason he left was that too many players in his position and fear he wouldn’t get game time. El Neny definitely has it in the locker and Wenger is not using him enough, wait and see.

Future captain, this one.

a different George
Reply to  JNG

I think he captained Switzerland this past weekend.

Agreed. I really don’t know if he can emulate Vieira, but I still appreciate his physicality. Frankly, who doesn’t desire a physical presence from your captain? Add Holding, with his no fucks given approach – kinda, sorta appears that we’re building a solid defence, again. Possibly.

“We missed our goal of coming in the top four”

More proof of Arsenal expectations. I would love it if I heard someone say “We missed our goal of winning the Prem or possibly Champions League. Then to not even come in the top four was a huge disappointment.”

Don’t get me wrong, I appreciate the difficulty of winning Prem or Champs League, but I’d like to see it as their goal. Worrying insight in to squad’s mentality and lack of winning mentality.

Err.. more importantly we missed our goal of winning the league.

The formation change helped … as did staying on his feet. The two may be related, but once sorted, he was able to play to his strengths — with good result.

Just so happy that we switched to a 352 and suddenly it suits many of our players. It’s given granit the platform n stsbility at the back foe him to spray passes and control the midfield. It has also given aaeon freedom to bomb forward into the box whilw the back 5 provide good cover. It’s also helped us in mesut’s lack of tracking back. Ox has also benefitted from it in that he’s got more space to run into. Stick to this and add that 1 quality striker and we could be in for the title!

Just as important as the switch to the back three, the partnership of Ramsey and Xhaka really gave stability to the team.

I mean if we lose Alexis, unlikely but I’m hoping we add 2 more quality players to the secondary attacking line behind Giroud/Welbeck. I don’t think we have enough funds for both Mahrez and Mbappe but that would indeed be strengthening if we had both plus Ozil, Ox and Ramsey. It will still leave nothing though for deep midfield where we have Granit, Coquelin, Ramsey and possibly Iwobi (in addition to the mediocre Elneny) playing there. Santi may be able to regain fitness but cannot be relied upon to do so. Jack (since it is Wcup year) may still prefer… Read more »

Note for next season, the goal is to WIN the league. Not top 4.

Expect Ozil to stay. I doubt many clubs are interested in Ozil with his inconsistency

Another example of some sheep like mentality Arsenal fan buying into the media narrative.

not sheep mentality. I watch him play and I’m basing it off his performance.
Please feel free to dispute my statement with facts etc

More assists than anyone in last two years. 28 last two seasons. yep you really do watch your football

He must think it’s a pretty mental team he’s joined. It’s always talked about how hard it is to adapt to the EPL and youve got to say he’s done fairly well considering he’s played alongside every Tom dick or harry in the club before settling next to Rambo, been labelled a an ADHD mentalist and seen the numerous dramas unfold within the club. But he’s actually done fairly good in there and has a great passing range that could develop if he is given a decent DM to play alongside. Probably needs to stop using Instagram though whilst driving… Read more »

Sanchez is gone. Sooner we believe it’s happened, the less it will hurt when it does…oh and Lacazette isn’t even fit to lace his boots.

why are all the players saying ”we missed our goal of top four?” …. your goal should not have been top four, it should have been the title. So that’s two goals missed.