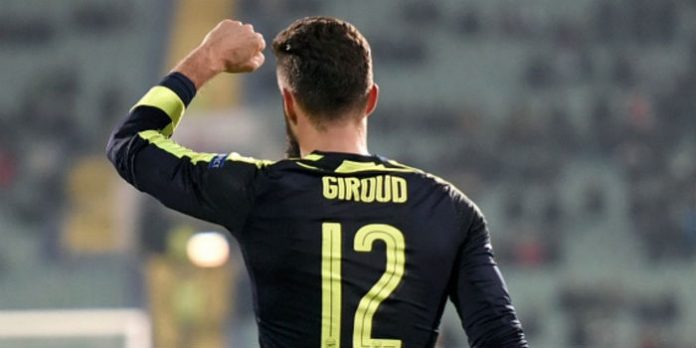 Olivier Giroud says he won’t be content sitting on the Arsenal bench next season but admits he’s currently happy in London and retains the backing of Arsene Wenger.

The France international penned a new deal back in January but ended the season with considerably fewer starts (17) than in any of his previous four seasons at the Emirates.

“We’ll have to deal with the summer transfer window, I’ll talk to the boss,” Giroud told a press conference ahead of France’s World Cup qualifier against Sweden on Friday.

“He [Wenger] counted on me, even though my playing time was limited. It’s not that I don’t have the confidence of the coach.

“Of course, I won’t be happy with another year playing so little. I’ll have a proper think and talk to my family and the people who advise me.

He added: “I still have two to three years left on my contract at Arsenal. My future, for now, is at Arsenal, I feel good and want to win the Premier League, but you never know what the future holds.”

Earlier in the week, Giroud admitted he wasn’t impervious to the interest of other clubs, particularly those in his homeland.

“I am not insensitive to the approaches of the French clubs,” he said. “Especially that of Marseille.

“But my future is in the Premier League. I still have titles to win.”

Why God? Why? Why won’t they let the team settle??!

It’s important to just read only what’s there–it is necessary for players to keep their words open for contract matters because they know that they can’t end their careers playing for Arsenal–too physically demanding. He says very clearly that he wants an EPL title and only cites interest in French clubs. He’s with us till the end of his co tract, as plainly stated.

Shere Willpower seems to be having an existential crisis of some kind. Let us know if we can help buddy.

No. This is good. Make him hungry to make an impact when he does play. That can only be a good thing.

Yeah or else ta ta. Even Niall Quinn put in more effort.

Hope we can give him as much as he wants but that depends I guess how he plays, how we play and who we sign

IF (big if) we don’t lose any other key players I could see him leaving should another striker be signed, but if Alexis/Özil/ goes it would be madness to lose one of our most senior players whose fitness and good (if not outstanding) goalscoring record can always be relied upon

If it wasn’t for the age factor, we should sell Welbeck and keep Giroud and Perez in case we sign a new striker. It is all about goals for me.

very underated player 20 million plus easy to buy some one of his calibre only cost 12 million. Benteke 33 million to Liverpool let that sink in 2 seasons ago lack of game time and service cost him his goal ratio this year, he will get time the Euro cup

Bdw.. he is one of the top striker in the Premier league. His longevity at Arsenal, preference at France and scoring record everywhere proves that. Shows how little you twats know about football.. All you lot want every season a new name that media tell you that we need.

Went a little overboard the with the name-calling didn’t you?
We’ve been in need of another striker for ages. Even more so if Alexis leaves. However, we will still need Giroud. It’s not at all a either or situation. Especially if Perez and Campbell or even Theo leave.
Let’s just calm it a little until we have another signing confirmed, eh?!

Who calling twats?!?..blogs….seize him!! I love giroud…even with his faults. But if 343 is our future, he will no be first choice.

#Blogs, WTF? I keep getting “I’m not allowed to vote this comment” Why? Please rsvp….

Lets go for league, euro, fa and even comedy cup – will get lots of game time and the chance of being part of the ‘quad squad’ if they win all four and why not? Coyg

No wonder the PR department has gone into overdrive the last week or so, it’s clear it’s not all happy families at The Emirates

He sounds perfectly happy to me..just wants to know he is going to start games. He has been a good signing and is still a good option for us. Marseille really need to cough up if they want us to sell

By the looks of it to me there will be or already has been some tough discussions between the club and certain players.

When the dust settles on the FA Cup win and the reality of where Arsenal are as a club, i can see us having a very tricky summer. Presumably the club can see that as well which is why they’re making such a noise at the moment.

mbappe bid,giroud-bellerin transfer out talks, all this for me feels like an perfect diversion from sanchez-ozil contract speculation windups….Media has totally shifted focus from sanchez to mbappe….seems a well laid out plan by arsene?..nothing wrong being optmistic?

Giroud is a specialist at his strengths. We all know them. How and when Wenger uses him is another thing.

He’s really excellent at what he does and the team needs his particular skill set.

charleschui
Reply to  The Kenyan Mbappe ??

It all comes down to who we sign and how that person performs..

Every Arsenal player interview right now is just the same thing over and over again:

“I need some reassurances about my playing time / no champions league / my future salary. It’s true other clubs want me but for now I’m an Arsenal player. But who knows what the future holds.”

It’s getting quite boring to be honest.

Boring interviews with our players is a good thing.

Nice guy but not a 1st team starter if progression is the aim.

We are in the Europa League so he will get plenty of games has the team that plays on a Thursday won’t play in the League as well.

Giroud should do well in the Europa League so I bet he will get plenty of matches.

I hope he doesn’t leave. If we sign someone new, the new player will either be a long-term project or a world pass starter the former is no threat, the latter will still leave plenty of Plan B time, plus some occasional starts. If we don’t find someone new, he’ll still get some starts and some plan B.

The only way he leaves, in my opinion, is to help fund a huge signing. Even then, we should hold onto him if we can.

Keep playing videos of the scorpion kick goal and we might get something for him. Plus the hairdressing bill will be halved.

This is a real conundrum. If Wenger goes out and gets a big time striker who goes? Welbeck’s movement and defensive exploits make him valuable but he doesn’t do what strikers are needed to do and score on a consistent basis. Giroud does score on a consistent basis but his movement is limited. He is good but not elite. James/Goonerblog is right about Wenger needing to be ruthless. If he does get a sure fire starter this summer, one of those two has to go. For me it would be Giroud. Welbeck is younger, more athletic and I believe won’t… Read more »

If we get an Auba or Mbappe..and assuming Ozil and Alexis stay..then it should be Theo out the door before Oli or Welbz.
Hell i.d show him the door regardless and invest the money in a Dolberg or Forsberg

Why do we have to sell one? Keep Giroud and Welbeck, Welbeck can also play in a wide role or behind the striker in the Sanchez position. With our injury record it would be madness to thin the squad out and I don’t think the money we would get from selling Giroud is going to make the difference with Mbappe. I would love us to build a deep squad this season and use the Europa League as an opportunity to keep those not automatically starting the Premier League fit and happy with playing time, letting the main guys concentrate on… Read more »

Giroud is a player that improves on competition! It will do him good. That’s why he plays so well for France and shitty for us when other strikers are injured.

If he’d started in the cup final we would have been at least 3-0 up at half time! Maybe him playing in front of Sanchez and Ozil in our new formation is just what he needs.

“I still have two to three years left on my contract”

I take it we have put him on a similar one year extension option deal similar to what Santi & Per were on?

He should be played more and we should keep him. For France he has started 16 and scored 16 goals. Last game against paraguay, he scored a hat trick the first for a French striker since 2000. Not bad for a plan B.;) He is better than Welbeck in the 6 yard box. his timing is better and he doesn’t miss as many sitters. His lack of pace is also exaggerated. He has made great effort in recent 2 seasons to get leaner and work on speed and timing. As illustrated by his assist for Ramsey. Even his scorpion goal… Read more »