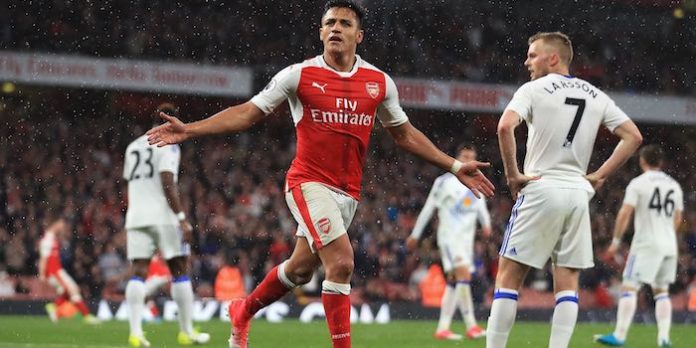 According to the Daily Mail and the Mirror, Arsenal have begun the search for a new shirt sponsor with Emirates unlikely to extend their current deal when it ends at the end of the 2018/19 season.

The Gunners signed a £150 million five-year deal with the Dubai-based airline in 2012, an extension of a contract that started in 2006 that also included stadium naming rights. The airline remains committed to sponsoring Arsenal’s 60,000 capacity home until 2028.

While other clubs have separated their training and matchday kit sponsorship, Arsenal’s relationship with Emirates sees them emblazon their logo on both. Such are the terms of the current deal, Arsenal are unable to negotiate sleeve sponsorship tenancy agreements that will be allowed next season.

So why are Arsenal looking for a new sponsor two years before the current deal ends?

It is suggested that Emirates have become ‘disillusioned with football’ and are also reconsidering their £10 million a year sponsorship of the FA Cup. Who knew that sponsoring the team that has won the cup with your name on it so often could be so disappointing?

In reality, any marketing team worth their salt should probably be chasing the sponsorship dollar 24/7 so if we’re looking two years ahead, that shouldn’t be surprising. Perhaps we can bring back JVC, they still exist right?

Our current kit deal with Puma, worth £150 million over five years, will also end at the conclusion of the 2018/19 season. Presumably, we’ll be keeping an eye out for potential suitors on that front as well.

While Arsenal’s shirt sponsor and kit producer deals were market-leading at the time of signing other clubs have since taken advantage of a huge influx of cash from multinational companies and we’re now way down the pecking order.

My son’s team is sponsored by a local Indian restaurant. Might not be as lucrative as Emirates, but we get half price curries.

A Yank in King Arsene\'s West Stand
Reply to  midgunner

There’s a Georgian restaurant just up from Highbury & Islington station that has a dish that’s basically melted cheese in a bread boat, I think the club should start there.

I’m not so sure you would have gotten half off flights from Emirates had they sponsored your son’s team.

Count your blessings you get half off curry.

Your balls were sponsored by a strip club? Respect.

Knew that was coming.

Can’t argue with that.

We’ve got to get rid of Puma. Their kits are rubbish.

How about He? Everyone with squeeky voices…

…Perhaps not the right forum for chemistry jokes 🙂

Good shout, one of my favourites also.

Vieira and Petit. They won the World Cup together as well.

are there any cannon manufacturers left in the world? A big ole cannon logo on the front of the Arsenal shirt would be awesome.

I think most defenc equipment in teh UK comes from BAe Systems. There’s also MBDA in Stevenage, but they make guided missiles, not artillery. Still make a big bang however. There’s Cobham as well, but they’re more elctronic warfare I think. Germany has Rheinmetall, who make aertillery, who they do?

I would love to see JVC back on the Arsenal kits – it would be class. Maybe jog Puma on too and get the ole’ Adidas back..

This kind of bothers me. Is this normal, or is it possible it has at least something to do with finishing 5th? If that’s crazy, I’ll go away.

I think we should be sponsered by fondant fancies, it kind of suits our personel I think

in other news blogs, a reason to be happy http://www.bbc.co.uk/news/entertainment-arts-40202111

Like his music or not, there is no reason to take joy at someone else’s misfortune. I’m sure Blogs would attest to that.

Personally, I can’t say I’m a fan of his music – my Dad is, but unlike Queen, Bowie and many others Phil’s was not one that rubbed off on me – but I wouldn’t wish/take joy from his discomfort.

As long as we do not get the ugly Chevrolet sign, I am for it. I see Emirates everywhere in sport. It was excessive. Let’s go sign with Tesla or similar companies.

Tesla would be cool!

Tesla would be electric!

Their logo would look right on the third strip, which is always shocking.

Given the current mood Gazidis should have a chat with Marmite.

Please bring back addidas for our shirt provider ?

Anything better than Puma’s trashy kits.

I suspect it’s more about the club looking for top dollar income from sponsors and Emirates either refusing to increase the present figure, or the pair having the negotiation dance where one says ‘no one will pay that amount’ and the other says ‘well XYZ Co have already said they would’… etc

We even won the Emirates FA cup for them, surely we deserve bonus sponsorship money for that!

For the gunners, surely only one way to go?

Unless we go for full Arse branding http://www.bodymods.org/Img8594_Arse_branding.asp

Might not be the best time to secure a top top deal now while we’re out of the CL.

Maybe we should hold off until after this seaon when we’ve won the Prem with mbappe?

They have time and it looks like they’re just putting feelers out rather than planning to sign anything this early.

Why it’s difficult to sign a deal with a clause that guarantees you to receive the same money the other top teams do? That actually exists or I’m ‘FootballManaging’ here?

It would be great to sign with some company who wants to buyout our current deals.

I think sponsoring companies would balk at the uncertainty. These are multiyear deals not only to fend off inflation, but also to tie it into other parts of your marketing strategy

Could it be due to this?:

“Emirates, the flag-carrier of Dubai, has deferred orders for 12 double-decker Airbus A380s in response to a 75% drop in profits”

I liked the way you linked the Mirror and not the Mail. Maybe I’m reading more into it but well played. Take every penny we can get!

I’ve got an idea. How about starting today having

A P
Reply to  Shitbird

How about FUCKING STFU!

Shitbird
Reply to  A P

Labour with a respectable lead in the likes.

Let’s just have Jeremy Corbyn’s face printed on the front, back and sides.

Bugger the sponsorship deal, would be for the greater good.

Considering this is dwarfed by the deal Man U have with Chevrolet, this is probably a blessing in disguise. I am sure we can command a better figure elsewhere.

How about Admiral for a kit and Walkers as a sponsor ??

I suspect it will be Turkish Airlines

Nike, Smuckers. Get in!

It’s time to be ruthless with these negotiations. As the article reads, we’re way down the pecking order now and our other revenue streams are piss poor in comparison to Europe’s elite that we aspire to be.

Don’t accept the first offer on the table just because they offer you a biscuit with your tea at the negotiation table. Be a bastard and get top dollar ?

Why not have a word with Flamini, see if GFBiochemicals want to sponsor us?

Only if they design a decent logo, I’ve coughed up better than the current GFBiochecmicals logo

To be honest there is no point in massive companies sponsoring sports gear and stadiums. Working in advertising the company sees not return on investment. In the day an age where people hate advertising why waste that money? Teams will start to kill themselves when they don’t see those free dollars coming in and fans will eventually be pissed because their transfer dollars will go down. Its a market we’ve created for ourselves. With no advertising comes less money for players and sites like Arseblog will eventually start to look at a paid model. I don’t want to speak for… Read more »

Because advertising works. It brings brand recognition and subliminally it just works. You watch a match and for 90 minutes all you see is Bet365. Man I want to lay a tenner on this game where do I go? oh yeah Bet365!

The cost on something like that is a lot lower than getting your company name on the side of a building or kits. These guys are paying hundreds of millions for that.

It certainly does work, but maybe not enough to justify the amounts involved now. What Standard chartered get out of their involvement with Liverpoo! is beyond me. Most others do get their name spread across the globe and you will often see a Real Madrid – Emirates, Bayern – T-Mobile, AFC-Emirates and even some old Dreamcast/Sega/JVC shirts all over the world, worn by everyone from a petrol pump attendant in Bogata, to a fisherman in Sri Lanka or Philippines, But the numbers involved now have probably exceeded the value. (How many fishermen or his mates in Philippines would use Emirates… Read more »

Surprised Kroenke doesn`t get his missus the Walmart heiress to sponsor our club !…………..she sponsors his syrup with her muff hair, so having Walmart or ASDA on the shirt should be easy peasy………….every little bit helps !

This suggests they do ; https://www.emirates.com/english/about/emirates-sponsorships/football/olympiacos-cfp.aspx.aspx

I work in the large JVC warehouse on the A406. It may still say JVC on the front but they’ve scaled way back and lease it to us and a few other companies. They def wouldn’t have that kind of cash we’re talking about for marketing and sponsorship. the digital age hit them hard.

Since Tom Fox left to go to Aston Villa, we have seen our commercial revenue flat line. ManU have about 500 sponsors around the globe and we are stagnant. For me we have to seperate our training jerseys(10mil) from matchday(50mil). Throw in another 5-10 for the sleeves and you’ve more than doubled your shirt revenue. I have really enjoyed the Puma jerseys but we need to at least double that revenue or go on a jerseys sold program. We get a portion of every jersey sold worldwide. If that happens we split the squad and maybe even send the youth… Read more »

And you just showed more vision and ambition in these 14 lines than Gazidis and Stan have ever showed throughout their tenure!!

If this wasn’t pitch perfect, I don’t know what is.

I think it would make sense to get out of the stadium deal as well. Maybe Microsoft, Apple or Google would like their name on the second best stadium in London (Wembley?).

JVC would drive our shirt sales through the roof! I know I’d be queuing up for one..

“Perhaps we can bring back JVC, they still exist right?”

Right, and the world obviously needs to be reminded of their existence 🙂

No more Puma please. They are horrible with design.

And since switching to Puma, Santi can’t seem to find his shooting boots.

The tightness of the shirt stealing his mojo?

Too bad Japan is no longer the money giant.

Sponsored by Cannon would be a nice ring.

Where are the O2 guys at?

We should go after Adidas…they just lost Chelsea to Nike so they need another top team.

Another O2 sponsor would be looking good, but it can’t be happening.

Emirates are spreading themselves too thin imho. Besides football, they also sponsor the men’s tennis ATP tour and Rugby Sevens (there could be more).

We need Canon as our shirt sponsor!!!

Guinness as the sponsor.

Is this Dick Law or Ivan Gazidis’s brief? Can we expect nearly there deals with megabucks world class brands like Apple, only to fail and get in Andre Santos on the last day of the window?

I’ve always wondered why Cannon (or do they spell it Canon?) don’t sponsor the Arsenal! Perfect fit really