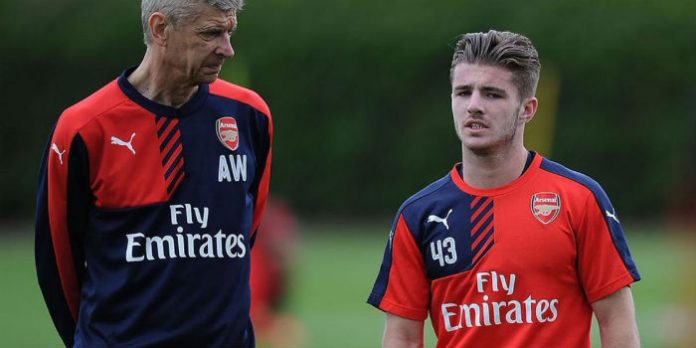 According to ESPN, Arsenal youngster Dan Crowley has a number of clubs eager to sign him on loan next season.

The 19-year-old midfielder is yet to make an appearance for Arsene Wenger’s first team but has long been tipped as a future star having been snapped up from Aston Villa three years ago.

Last summer the England youth international signed a season-long deal with Oxford United only for the League One side to call time on the arrangement six months early. It was suggested at the time that the player’s attitude had played a role in the decision.

Crowley subsequently moved to Eredivisie outfit Go Ahead Eagles in January and went on to score twice and make two assists in 16 appearances.

His performances in the Dutch top flight appear to have turned heads with both Fulham and Bundesliga side Hannover eager to offer him more first team experience. It remains to be seen whether Arsenal will sanction an early loan or give the player a chance to shine in the upcoming pre-season tour of Sydney and China.

dan crowley seems to be our odegard!!!

Well, at least this works 😉

He appears to have an attitude problem – hope he wises up sooner rather than later.

Yeah – I genuinely do not understand the mindset of some of these young players like him that have bags of talent, they’re playing at Arsenal, with a real opportunity to have an unbelievable life and career – its all in front of them, and they blow it. I just cant fathom why you wouldn’t just work your nuts off and be the best player you can be, make the Arsenal first team, and then literally live the dream. If I was 16 to 19 years old playing in the Arsenal youth ranks, you would have to physically remove me… Read more »

Some people just have the seed of destruction within them.

He’s a kid. Get off your high horse. The ‘seed of destruction’ ?Jesus, what patronising nonsense.

As Me So Hornsey said, it’s very easy to forget how it was to be 16.

George
Reply to  Kwame Ampadu Down

Me So Hornsey
Reply to  IamaGoober

This is a very easy thing to say once you are no longer 16-19. It’s possibly the most difficult period in anyone’s life to be focussed and disciplined. The distractions at that age are infinate. Girls, clubbing, peer pressure, lads trips, alcohol, recreational drugs, junk food, add a bit of cash in there and it must be extremely difficult to, as far as they’re concerned, practically live the life of a monk, which is required to make it at the top level. A couple of the most naturally gifted players in my school ended up as dustmen or stacking shelves.… Read more »

“Yeah – I genuinely do not understand the mindset of some of these young players like him that have bags of talent, they’re playing at Arsenal, with a real opportunity to have an unbelievable life and career – its all in front of them, and they blow it.” I work in a college and it is very difficult for students of that age to focus. Of course they _should_ and they all know that, but they still find it difficult. Same applies to footballing talent. The mental side of the game is a huge reason why the vast majority of… Read more »

I truly hope that Crowley goes to Hannover for two main reasons:

1- I think it’s incredibly important to export more of our talents at a young age to give them a rounded footballing education and to reduce the gap between the prehistoric English style of football and the manner in which the actual top nations play.

This lad better come good. When he was 15 I put £100 on him getting an England cap. Didn’t get great odds but £500 is always a nice little earner!

Those odds are insane!

No way
Reply to  Mein Bergkampf

Hasn’t he said he wants to play for Ireland?

Mein Bergkampf
Reply to  No way

Eek. You serious? I known he represented them at schoolboy level but I assumed that was just silly teenage rebellion.

Does he really want to join Tony Cascarino and Clinton Morrison in the “there’s more to Ireland dan dis” category?

Paul
Reply to  No way

Bet not looking great if so!

You still here then Paul? Did it turn out you didn’t have a life after all? Shame. Welcome back son.

A friend who is an Oxford United fan said there are two reasons Crowley was eventually sent packing. Piss poor attitude and not good enough. He emphasised the not good enough part.

Far from the truth. If your friend actually watched him play or knew anything about football talent, he’d notice quality. Crowley has incredible touch and dexterity for his age, and frankly, most Oxford players are shit in both areas.

According to him Crowley acted as if he was hot shit and Arsenal’s gift to Oxford United while failing to impress on the pitch. If, by your statement, Oxford’s players are so shit then he apparently failed to be better then them.

No way
Reply to  Godfrey Twatsloch

He doesn’t look much like the type of player to thrive in a long ball 442. Maybe that was part of the problem. I’m sure the manager during his first loan spell said he was incredibly talented but arsenal wanted him back early.

Would be nice to see some more young gunners come through rather than forking over 100 m every summer.