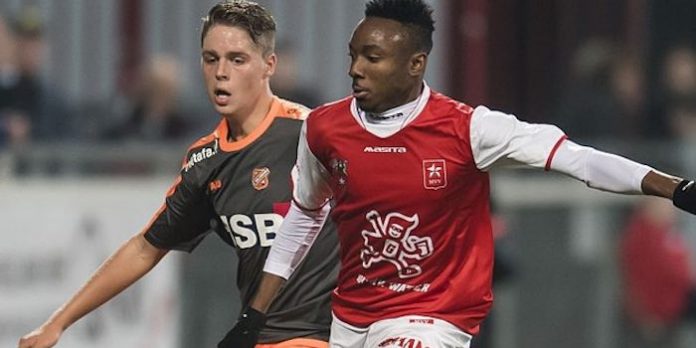 The Nigerian youth international was, almost immediately, sent out on loan to Dutch second division club Maastricht, where he excelled with some superb performances.

Gifted technically and capable of bursting forwards to excellent effect, Nwakali quickly established himself as one of Maastricht’s standout players.

Most importantly, the 19-year-old gained valuable experience of playing first-team football as he amassed 34 appearances across all competitions, scoring three goals and providing four assists.

Now attention will begin to turn to what Nwakali’s next step will be, with the prospect set to return to Arsenal for pre-season training.

The likelihood will be that Nwakali will spend a couple of weeks training at London Colney, perhaps with the first-team as he looks to impress Arsene Wenger, before being sent out on loan again.

Nwakali’s next temporary transfer will most probably be to a team in one of Europe’s top divisions and, should such a scenario transpire, it will be interesting to see how the youngster copes with the step up in quality.

One thing that is for certain is that Nwakali certainly won’t be fazed, regardless of the opposition that he faces. He did, after all, enter last season with no prior experience of European football and turned out to be one of Arsenal’s best performing loanees.

Although he isn’t the strongest physically, there is plenty of time for Nwakali to improve in that regard as he looks to develop further so that he can eventually return to Arsenal and compete for a place in the first-team squad.

Wenger will be well aware of the progress that Nwakali has made on loan, although the Frenchman may feel that the starlet isn’t yet ready to be considered to make the step up for Arsenal.

The initial signs, though, appear very encouraging regarding Nwakali and it is hoped that he will continue to develop wherever he is playing next season.

Always good to hear of one of our young ones doing well. Props to the lad, and hope to see him in the first team in a few years.

He won golden ball in u17 world cup for Nigeria . last time arsenal signed a player who won the golden ball at u17 world cup he turned out to be one of the best player wenger even had…fabregas. Hope the kid follows his lead (except the part where he went to barca )

To be exact, he won the Golden Shoe (Boot) in 2007, not the Golden Ball. Some interesting names on that winners’ list though, including Toni Kroos and Landon Donovan, but also Florent Sinama Pongolle and Anderson! The winner of the award before Nwakali was Kelechi Iheanacho, of recent Man City fame.

Was about to mention that.

think he won the golden boot for scoring the most goals!

And Chelsea, the fucken wee prick….

Didn’t Sanogo get the golden boot there?

He did but the golden boot wasn’t worthy of him so they didn’t actually give him 1.

Ousmane dembele is 18 or 19 and playing first team football for Dortmund and France. Get this kid in the squad just like Iwobi. Europa league and league cup plus trsining with better players….gota be better than dutch 2nd division or whatever no?

If the kid was Ousmane Dembele quality, we’d know about it and so would Arsenal. He needs to be given a fair chance. Fast-tracking someone into the first team setup often isn’t good for them, especially with someone like this guy who still has physical developing to do. Right now he’d probably just get his confidence destroyed after being nudged off the ball again and again if we tried to put him in the first team. I mean sure, if he’s not already loaned out for the first league cup game, give him some minutes and if he pulls up… Read more »

A loan again (naturally)… are we still doing song titles?

Hahaha respect, Í Will be on loan again tonight my dear…

play him now at least in pre season. the kid is so gifted.age ain’t nothing but a number. dembele , mbappe have his age.

But you do have to be careful not to prematurely push someone into the depths. This kid seems like the real deal. He tore it up in his time there. Can’t help but be excited for his future. No pressure kid.

For every Mbappe or Dembele, there a dozens of burnt out and broken Denilsons. The kid come from a different continent, let’s give him time. Also, what’s the lad’s work permit situation Jeroge?

He’s surely a talent. His playing style reminds me of chucks Aneke of yester-years. Wonder what happened to the lad.

Wenger ought to cash in on Perez and have Nwakali take his place. What a waste of £17.5 million. Nwakali would be far more content to be in and around the squad, as well as not representing a significant downgrade in talent.