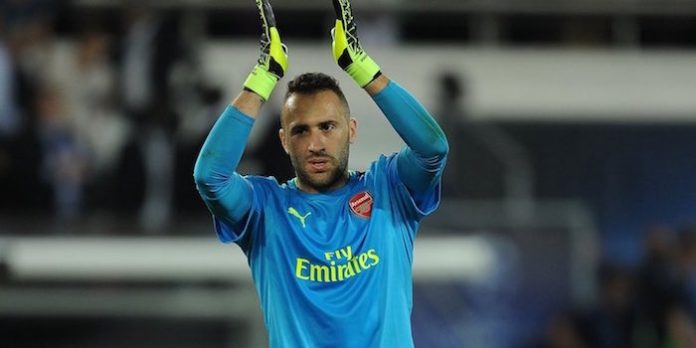 It was widely expected that David Ospina would be leaving Arsenal to join Fenerbahce, but it seems the move has been thrown into doubt by a last minute price increase imposed by the club.

Via Sport Witness comes news that the Gunners jacked-up the transfer fee in spite of the Colombian keeper agreeing terms with them some time ago.

The Turkish side are now, reportedly, on the brink of signing Malaga, and former Espanyol, stopper Carlos Kameni.

The news comes as much about the goalkeeping situation at the club remains up in the air. Although Ospina’s departure would be no surprise, there’s still the issue of Wojciech Szczesny who has been linked with a move to Juventus.

This, despite having 12 months left on his current deal, being open to a stay at Arsenal, and on the back of an impressive season in Serie A in which he kept more clean sheets than any other keeper in the league.

Yesterday, it emerged that Emi Martinez has been earmarked for the role as Petr Cech’s understudy, so there’s clearly a lot to sort out still.

As ever though, summer stories need to be taken with a pinch of salt. It could be Arsenal’s fault for hiking up the transfer fee, or Fenerbahce putting that story out as they prefer to go in a different direction.

Either way though, it looks like Ospina will have to find another club if he is to get the move he desire this summer.

Quite right if true

The kind of thing that seems to happen to us on a regular basis. If so then about time we reciprocated.

I know it doesn’t always work like this but if Pickford is worth 30mill then surely Ospina has got to be at least 15mill……at 28 Ospina is just coming into his prime as GK.
I’d love to see us start selling players at there value rather than letting them go on the cheap all the time.

Asmir Begovic was recently sold for 10mil and he had only 2 appearances last season!

Finally, the negotiators at Arsenal grew some balls.

I’ve no problem with Emi Martinez as our no.2 this coming season. He has looked absolute quality when he has played. The only negative against him is a lack of playing time. Surely a season with Europa League and the cups provides that?

Of course, if we do that, Cech miss bound to get a long term injury the day after the window shuts! It’s still a risk I’d be willing to take. Perhaps possible to loan Szczesny or Ospina with a recall clause?

It’s almost like they are listening to the podcast!

It would have been an insult selling him for 3mil he is worth more than that. Fenerbahce wanted to turn Arsenal on Arsenal (Getting players on the cheap) glad it backfired

I think the Arsenal hierarchy must read the comments on Arseblog.

I still blame Cavani for scuppering our Suarez deal… 40M+1 looked like a good deal till Cavani went to PSG for over 50M. Liverpool suddenly woke up and we all know how that ended. I am happy we are on the other side of the divide now… You have to pay big bucks for proper talent.

Seems like the club (at least the clueless Board…& probably the equally football unsavy owner) are undertaking their transfer dealings based on the comment section of this blog.

“Right, no idea how much he’s worth, but let’s leak that we’ll sell him for this ammount…Whoa…Wait up…General consensus is that for a proven International & half decent keeper we should be getting more. Right jack the price up a bit”.

Damn right we should be getting more than was originally mentioned! Farsical to say the least.

To be fair, Fenerbahce always seemed like an underwhelming destination for a keeper of his quality.

Surely there’d be a number of teams in top European leagues open to signing the no. 1 keeper on the Colombia national team.

He played in the Champion’s league and the FA Cup final, so it’s not like he’s barely played.

And considering Fabiansky went from barely a cup keeper to no. 1 at Swansea, yeah, for someone far more talented, Turkey seems like a massive step down.

Is Ospina “far more talented” than Fabianski? More talented, maybe, but I think they’re both in the category of “good but hardly great” keepers. He’s certainly worth more than 3m, but since that was obvious weeks ago, why have we only woken up to the fact now? It’d be good to get more than that for him, but it would also be good to sell him quickly, to a) make room for Szczesny (though bizarrely looks like we’re going to let him go to Juve), and b) raise some proper transfer funds. We’ve got a lot of deadwood to sell… Read more »

Kwame Ampadu Down
Reply to  SpamB0t

He’s about the same level as Fabianski imo. Good but a fair way short of top class.

What is the fee? The 3mil being bandied about was ridiculously low. For me he is worth 8-10 mil

Good. But it again illustrates how indecisive we are in the transfer market.

I feel obliged to leave this here:
https://www.youtube.com/watch?v=stC2SNax6kI

Ospina is grossly underrated apparently because he is a gentleman . Many forget he is his country’s no.1 and that speaks volume. His worth can only be appreciated by people who watch his heroics in Copa America and World Cup matches for his country. We all saw what he did last season in Paris against PSG when Arsenal defense went to sleep and he was crowned man -of-the match.I would like him to stay but Wenger should allow competition between him and Petre Chech to bring out the best out of both of them. One could see complacency in Chech… Read more »

selling SzczAND Ospina smells like gambling on emi to raise funds for mega purchases. maybe. it is conveniently easy to think that way.

Has there been any verification anywhere that 3 mil was ever a real number in any way, shape, or form? The club can’t “jack up the price” if they never gave one before to start with. Smells like agent or buying club dealings to me. Even if the club’s hand is weakened by the fact everyone knows he’s going, 3 is far too low.

Then again, a bidding war did not ensue. This one may go on until later in the window.

the main reason is you cant get maximum prices when they only have a one year deal left they hold the club to ransom who’s fault is that ? rather than single out a person its Arsenal’s fault

A P
Reply to  bazza_wicks

So your solution is to keep extending contracts of players we are no longer keen to keep?

Well since holding the players at gunpoint until they sign is illegal, it’s up to them to decide to accept an earlier extension.

Once we got Cech it was writing on the wall for Ospina, so there was only one way for this to end. We’ve had a luxury condition with him as 2nd choice to Cech. Not saying he’s a proper #1 for us, but he’s no permanent bench keeper and his age won’t let him wait out Cech’s stay.

I should bloody well hope so. What that lot smoking in their pipes?

Hashish in their hookahs, clearly.