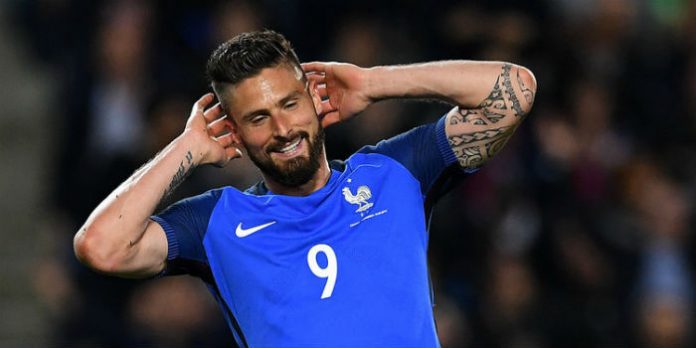 From an Arsenal point of view, Olivier Giroud is rapidly becoming the star of the summer transfer window…that hasn’t even opened yet.

The France international, 30, has already been linked with newly-minted Marseille, Newcastle are said to be sniffing around and now, if you believe the reports, he has two further suitors – West Ham United and Lyon.

The Hammers, according to the Mirror, are open to splurging £20 million on the striker and wouldn’t have a problem paying wages of £100,000 a week. To add fuel to the fire, West Ham blog Claret & Hugh claim the player is eager to leave Arsenal having grown frustrated by his lack of regular football last season. We’ll take that with a hefty pinch of salt.

We’ve already covered three lots of quotes from Giroud since the end of May, each discussing his circumstances at the Emirates.

While on international duty – France play England tonight – players get asked a lot about their circumstances, so the fact he’s constantly in the press isn’t unexpected. It’s worth remembering he did commit himself to Arsenal in January for another two years.

Rumour number two, courtesy of an EXCLUSIVE from French sports site Le 10 Sport claims that Arsenal are in talks to sign Alexandre Lacazette and that Lyon chairman Jean-Michel Aulas thinks he might be able to grab Giroud as part of a deal.

Lacazette was due to move to Atletico Madrid but saw that dream go down in flames when FIFA slapped a transfer ban on the Spanish club. The attacker is still eager to leave though and has been linked with Arsenal…because Alexis Sanchez might leave.

A figure of €60 million has been banded about, that’s €20 million increase on last summer’s mooted figure. Modern football.

That’s a lot for the poo-o-meter to digest…a runny 9 for suggesting he’ll go to West Ham, a runny 7 for a swap deal. Leaving us with an 8.

I hope he stays and replicates his world class France form!

If all the players that the media report are leaving actually leave we’ll be left with a squad of Emi Martinez, Coquelin and Elneny.

“Mass exodus!” It’s annoying isn’t it? If the media were to be believed we would lose our entire squad, youth team, fanbase and manager every year. We would try to sign 100 players to replace them all but get “snubbed” by every single one of them due to them all ending up at either Manchester club for “megabucks” who are on a quest to defy all rules and own every player in the world. The funniest story was about some young, northern league 1 player some years ago we were connected with (when we were having that “defensive crisis”). The… Read more »

As I said yesterday ‘why don’t you go and do something more interesting instead?’

But people enjoy reading made-up stories about transfers so why spoil their fun?

And yet here we find you whenever there is a transfer story….

One of the few sites I trust.

Come on. Most transfer stories are pretty accurate. Boy did Higuain, Draxler and Sebby Frezza have a sick campaign. Roll on 2017/18!

A “mass exodus” is never going to happen under Wenger. He wants 2-3 players in and perhaps a few more out (considering we are “a bit heavy”).

If the Exodus is Yaya, Debuchy, the Corporal (although sad to see him go), Gibbs and perhaps Theo, I think we’re OK. When it comes to Özil and Alexis, that’s where it’s going to be tight. But we all know that.

And Yaya said to Pharaoh, “let my people Sanogo!”

a different George
Reply to  Jdog

I enjoy it most when clubs make a swoop for a player. I always picture Florentino Perez, or someone like that, with a butterfly net chasing Bellerin or Giroud.

And they always put table a bid. Table isn’t even a verb.

Then Arsene will literally play three at the back.

I can feel it spurting out

Turn the shit meter up to 11

i feel happy for giroud even though this may hurt arsenal!!!!

Giroud has to stay. He is a proper game changer from the bench. His time as a starter has probably come to an end but is very useful to the team when a Plan B is needed. It’s all about Strength in depth and we need him.

I’m glad Olivier has many suitors (supposedly). And then i think that the media said nobody wants Özil…

Poo or no poo.. I just want him and his beard to stay!

I’d rather sell Welbeck. Not saying we should, just saying Giroud is way better.

Welbeck is better than Giroud

Yes! Welbeck is the one we need to upgrade. Giroud is very good at what he does.

Giroud is a better finisher, but you can’t deny we play better as a team when Welbeck starts. His fast-paced aimlessness and athletic misses causes havoc!

But no but yeah we should be signing a striker this summer.

Handsome French bloke ain’t going! Who else would sport the abs for the tour photos if he went?

Sell Lucas Perez because obviously Wenger isn’t going to use him. Buy a proper ‘top quality world class’ striker That will leave us with: TQ WC Striker Giroud Welbeck I’d be satisfied with that. Especially since our club is always camped outside of Injury Corporation Ltd. Why the heck would Giroud want to go to West Ham when he wants to be challenging for a title and is already in the French national side. He seems settled at Arsenal, he knows there will be way more game time next season given Europa League Games (and we can’t forget Community Shield)… Read more »

We could have had Mbappe for nothing last year. Now………..? Modern Football

The season Leicester won the title, Ozil created so many chances that even after Cazorla’s injury we were able to stay top of the table for about two months. The real killer was the goals drying up and Giroud’s 14-game drought was a big part of that. What was his response? Last summer he was vocal about Arsenal’s need for a new striker to help the team, knowing it would mean less playing time for him. He accepted a role as substitute, delivered when called upon, ended up with the best minutes to goal ratio in the league and assisted… Read more »

I suspect West Ham will try and take him on loan, to which the reply should be ‘fuck off, cheapskate twats’.

But yeah, no way Giroud should be allowed to leave – scores goals and offers a physical presence that none of our other strikers (or potential targets) possess. I’d sooner sell Welbeck and Lucas to be honest.

It’s very simple, keep Giroud, Welbeck, Perez. 3 very good strikers and they all offer something different to Arsenal attack. Wenger just needs to figure it out how to rotate them. Bring back Campbell and Toral for Europa cup. More than striker, we need proper creative central midfielder. Have a nice day bloggers 🙂

Wanting more starts is not the same as wanting to move away.

And the fact he starts ahead of Lacazette for France should tell you something. He scores but also brings a lot more to the team in assists and presence.

We should keep him for at least another season even if we should sign a new potential striker/attacker for the future.

I haven’t seen a single “Come get me” plea lodged in the whole window yet. What’s going on????

Please wenger must give sanches 275,000 per week

So far excellent contribution from Giroud.

Good header with a good save from Heaton before Umtiti steered it in.

Also interesting Giroud-Mbappe combo up top. Dare I say sign of what Wenger may be thinking of.

OTOH, Ox looks lost in his role for England.

The media reckon West Ham are offering 20million for Oli on a four year deal. Treble it and still fuck off, he’s our HFB and he’s going nowhere. Besides, if he was going to leave, which he isn’t, he is far too classy for a shit club like that. And I’d be furious if we traded him for Lacazette, who isn’t even as good as Oli anyway.A dozen slimy poos.

It’s so left field as to be typically Arsenal.

Giroud is the only reason to ever link a buzzfeed post.

If it were up to me,I would sell gibbs, debuchy, jenko, wilsh, elnenny, ospina, campbell, lucas. This should supplement our transfer budget, just so we can do a rather unexpected ship-in on lacazette, mbappe, lemar/Seri.. Then id take the gamble on Theodore and Welbs, depending on how well the transfers-in go..

Just puddin talk anyway.. But a man can always be hopeful

Giroud to stay for me , good squad member .
However I will say even at 30 , he’s gotta be worth 40m in this market .
Consistent goal scorer , France starting international . Good injury record .