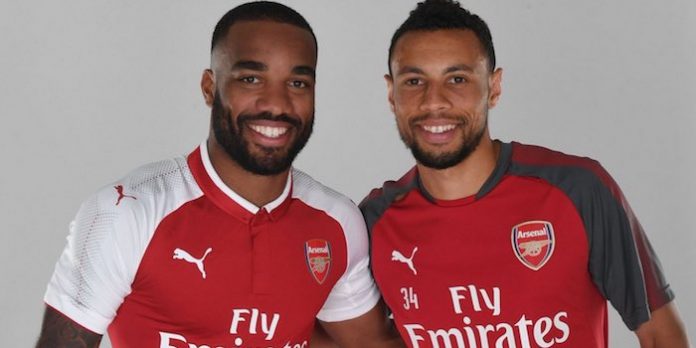 It’s par for the course when a player arrives at a club and is labelled the new somebody. Abou Diaby was the new Patrick Vieira, we’ve had a few new Thierry Henry’s down the years (who haven’t been that at all), and now Alexandre Lacazette has been called the new Ian Wright.

It’s not something that works for Francis Coquelin though and he insists that the former Lyon striker is very much his own man.

The two go way back, playing at French international youth level together, and he’s back Lacazette to make his mark in his own way.

“It is difficult to compare him to others,” he told the Mirror. “I don’t really like comparisons. Everyone gets compared to everyone.

“He is 26 now and I think he is done with comparisons. He has showed that he is Alex Lacazette and he can score goals. He can make a name for himself.

“With the way he plays, people have said Ian Wright – if people think that, okay. But he has his own style and hopefully he can show that this season.”

And while some have had doubts about his ability to adapt to the Premier League, Coquelin is confident his old made can do the business.

“He scored 37 goals last season in 45 games, so I don’t know why he cannot score for Arsenal,” he continued.

“It is just whether he is going to put them away and I’m sure he will.

“He will probably get even more chances than he did at Lyon and it is down to him to score them but I’m pretty sure he has come here with his confidence high.

“In front of goal, he’s someone who likes to score goals. He doesn’t need many chances to put them away. I hope we will see that this season.”

I promise to laugh at Lukaku everything Laca scores

May I ask why?

If he can gel with Ozil early on then he’s got a chance of 20+ goals this season. And more if he is the penalty taker.

Add Walcott to that and it could easily 10-15 goals

Add WENGERIN to that and it could easily be 47-49 goals.

So with luck and no injuries 50 goals this coming season.

Wow, what a great signing.

Add Bellerin sending crosses in having charged down the wing.

Thank you all for the tips. I just put a tenner on Lacazette to score at least 75 goals this season, got odds of infinity to one. If this happens and I win all the money in the universe, I promise to buy a whole planet for each and every one of you.

Add a bit of luck with having no injuries plus Bellerin crossing well and it could be 40-45 goals.

Laca and his Coq

I don’t understand the notion of him not being able to do it in the Premier League. Sounds like a bunch of British media rhetoric to me. Can Messi do it on a rainy night in Stoke? Yes, probably 5 times. Bunch of Redknapp Savage-esque rubbish to me, and we all know that lot just drool out their words.

I know man, people seem already critical of our man before he’s kicked a ball in anger. Yes the French league isn’t great but and Lyon aren’t a great team in that league. But Drogba came from Marseilles and Benzema from Lyon and they both had incredible careers at top clubs.

I agree with what you’re saying, but I would go further by saying that maybe the French League isn’t as weak as people say. They’ve had 7 different league winners in the past 10 years and have had fairly respectable performances in the Champions League. They have phenomenal depth when it comes to their youth prospects, and its probably because of top clubs poaching their talent (as you pointed out) that their league hasn’t blossomed as it should have. I just think the strength of their league is being understated. And like how we’ve seen cyclical changes to the powerhouse… Read more »

Also, the last three players of the year in this country came to the Premier League from Ligue 1

A different George
Reply to  TweakinGooner

There is a grain of truth that is exploited into a myth. The truth is that it may take a player moving up in class (from the Championship as well as Ligue 1) a while to adjust to the higher quality of the opposition. The second grain of truth is that some leagues–Italy, for example–require adjustment because they involve more technical play and less pace–but that doesn’t apply to players coming from France. But this becomes the silly self-serving myth–“we’ll soon see how crap that fellow Ibrahimovic really is. Never be able to score like that in England.” Ok, he’s… Read more »

Laca finishing has never been in doubt if you have watched him play. I watched it first hand as early as 2011 when he sent my national u20 side (Nigeria) packing with two of the most emphatic finishes at the Fifa u20 world cup quarter finals. I guess what people have always doubted are the other parts of his game including his performance in the big games. This has greatly improved in the last few years, last season he played well and scored once or more against the top five sides in france (Monaco, psg, nice, Bordeaux and Marseille). Wenger… Read more »

Lacazette is a good striker, Cant see him being much of an improvement though, we’ve already got good strikers
It’s hardly a signing that’ll have any other PL manager quacking in their boots.

You should join the Sky Sports team.

I love Arsenal and this is simply my opinion that I’m entitled to have.
If I’m wrong I win. And if I’m right as per usual I get to come on here and gloat when I’m upset about us losing.
Hate me all you want I don’t care.

The Golden Wrigglesworth
Reply to  Rich

Not sure about that. Some very credible sources are suggesting that Donald Duck is poised to take over from Mark Hughes at Stoke. He’ll certainly be quacking in his boots for Lacazette’s first trip to the Potteries given how slow Stoke’s backline is.

I’m with the Coq on this, this comparison things is one of the hype that has kept hampering young English footballers growth in the game. Theo Walcott for example since after the Henry comparisons he tried changing his game style to be similar to His idols and that’s it,his career started faltering. Just as we all have different faces so are we different in many things. Though it’s not bad to have someone you idolize but,You mustn’t be the person rather you can aspire to be better. Look at Messi and Maradona for example.

He is the new arsenal striker to be fair.

Hard to tell from the photo whether he’s shorter than our coq.

Coq is wearing stilettos in this.

Our Coq is hard, that’s all you really need to know

Yes! A player with some sense. Even you, Arse, fall in to the comparison game way too often.
“Comparison is the thief of joy.”

Love it when my old made does the business

I thought he was the new Darren Bent!

Oh FFS. That can’t be un-seen. Thanks for ruining the enjoyment of this signing for me.