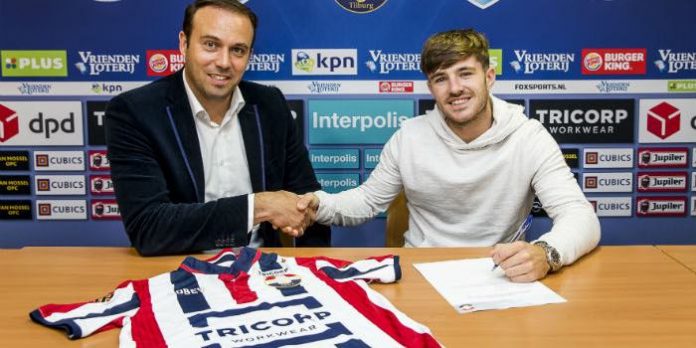 Dan Crowley’s transfer to Willem II has been officially completed.

The 19 year old, who has represented both the Republic of Ireland and England at youth international level, never made a first team appearance for Arsenal, but had loan spells at Oxford United, Barnsley and Go Ahead Eagles.

He’ll ply his trade in the Eredivisie, and the midfielder told the official site of his new club, “I want to be important and develop myself as a player. I can only do that if I get playing time and get confidence, I feel like I’m going to get it with Willem II.”

At least that’s what Google Translate says he said. It was probably something a little more polished than that, but we like the sound of it anyway.

Best of luck to him there.

Shame. Dan appeared to be the shining light of his generations academy. Dunno what happened here, he was unstoppable at 16, a few weird loans and he’s being shipped at 19. Good luck fella!

Attitude problems wherever he went

So I hear but with that much raw talent, couldn’t a hand on the shoulder and a stern word have sorted him out? Jack had some serious attitude issues early in his career and although isn’t perhaps the player we all want him to be, is a consummate professional and a positive player to have in your dressing room.

Me
Reply to  Mein Bergkampf

Difference is, aside from a couple times caught smoking/partying, Wilshere didn’t have any documented issues with attitude in training or any of that kind of thing that stunted his development, as far as I recall. Crowley doesn’t seem as serious about football as he should be

Faisal Narrage
Reply to  Me

He’s an English lad who’s just done the rarest of the rarest; signed for a club outside of England.

We can question his attitude (which wasn’t apparent at Go Ahead Eagles btw, where he knuckled down and worked hard), but you can’t claim he’s not serious about football.

These English lads get too much too soon and therefore don’t appreciate their talent. They think they’ve made it once they sign a contract and earn more than the average person.

I feel that the club should work harder to safeguard against these complacent attitudes. We do seem to have a certain smugness in our academy. Maybe the young lads see the older squad members taking selfies of themselves in the gym and act accordingly. So many of the best players in the world are loose cannons, it’s up to their club to teach them appropriate behaviour and positive attitude.

I agree with you – to an extent. I honestly believe some characters are beyond help. Unfortunately, Crowley appears to be one of those – a big time Charlie. Let’s hope he grows up and realises his enormous potential and great fortune at getting an opportunity to play football for a living, and get paid a fabulous sum for doing so.

World B
Reply to  Gunnya

Weird loans were the problem. If you’re looking to produce a player that can fit with Arsenal, you don’t loan him out to hoof-and-chase outfits like Oxford and Barnsley. Going lower than the Championship is useless and destined to produce issues with young, legitimate talents. Appleton was sacked from Oxford. He could have incorporated a great talent, but instead decided to trash 19 year old Crowley in the papers. Crowley has shown professionalism. He was failed by Arsenal’s choices.

arseblog
Author
Reply to  World B

Crowley made the decisions to join those clubs on loan. He was sent home from both of them. It’s pretty obvious where the issue is.

World B
Reply to  arseblog

Teenage prospects dont dictate to their clubs where and when they go on loan. Please be serious.

Reminds me a bit of Bentley..ultimately not sufficiently willing to knuckle down and earn his place at Arsenal. Shame. Would have liked to seen them both come through like Iwobi hhas

Last time I mixed young potency with experienced powers all I got was a restraining order.

Good lucky to him. I hope there’s a buy back clause as he really was one of the special stand out talents when he first broke into the youth set up. From most accounts his immaturity, attitude and application has been what has let him down more than his ability. It’s a shame.

Faisal Narrage
Reply to  Me So Hornsey

This is Arsenal.
Of course we didn’t insert a buyback clause. It’s too obvious.

What? I thought he had a potential to be better than Wilshere.

No, Dan, you can only do that if you screw your head on straight and give it your all.

I admire the move to a foreign league and hope he makes the best of it.

Len’s return came too late for this fella, he’d of screamed his face off. If he had an attitude problem and couldn’t appreciate what he had, tough titties for him…If you cannot grow as a person and constantly rely on others to adjust your attitude you are doing it wrong and DO NOT deserve the opportunity to play for Arsenal. I appreciate these are just kids, but humility at this age off the pitch is a must. You can be as arrogant as you like on the pitch, it can help achieve greatness, however at this age you should respect… Read more »

Think it’s the best possible move for him, and us if we’ve got a buy back clause

How did u resist saying Willem Deuxfoe?

Little Swede In The No.14 Shirt

Did they sell him? was this his first pro contract? If they sold him does Arsenal think so low of him now that that they didn’t put a buy back clause in 2 years?