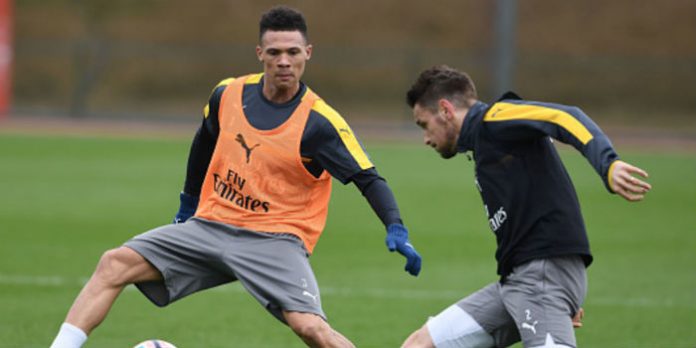 Kieran Gibbs, Carl Jenkinson and Mathieu Debuchy could be set for one final appearance in an Arsenal shirt after being included in the squad for tomorrow’s friendly with Boreham Wood.

The full-back trio were all left out of the Gunners recent tour of Australia and China to allow them the chance to negotiate moves away from the Emirates.

Despite being sidelined from first team matches, all three will get vital pre-season minutes alongside the likes of Chuba Akpon, the Jeff, Krystian Bielik and Eddie Nketiah at the official opening of Boreham Wood’s newly redeveloped pitch.

Arsenal have helped fund the improvements at the Boreham Wood as part of a deal that will see the Ladies side at Meadow Lane until 2027.

Playing with lots of youth team players, I wonder if they will get the hint?

Sadly for these guys (gibbs, corporal, and beduchy) the writing has been on the wall for some time… so no hint really For the first two, and especially corporal, I see it as the last time he might pull on the shirt he loves so much, and for Gibbs too. It must be weird thinking there might of been a possibility of having played your last game for The Arsenal, without the chance to play ‘one last time’. These guys have been passionate, great servants for the badge, the club and the team, and I will be sad to see… Read more »

Debuchy – “I feel I’ve been treated horrendously by the staff, the club and, most of all, Arsene Wenger”
Perez points to the number 28 on his jersey.
Debuchy – “Ok, maybe it’s not been that bad…”

Kwame Ampadu Down
Reply to  Dustwolf83

I’m always confused why a lot of posters here see the likes of Gibbs as passionate, great servants whereas the likes of Theo is lambasted as a dosser just happy to pick up a paycheck without extending himself.
There’s nowt as funny as people’s perceptions.

Paul
Reply to  Kwame Ampadu Down

But Theo has only scored 100 goals for us.

Maybe it has to do with the fact feo has repeatedly held the club ransom whenever his contract was up? Or that his performance/effort level on the pitch appears to be correlated to the length of time remaining on said contract? On the other hand Gibbs I don’t recall Gibbs ever kicking up a fuss when it came time to sign dat ting…it gives fans the impression that he is loyal and loves the club

The ‘impression’ maybe…but is not kicking up a fuss really enough these days to be deemed a passionate, great servant who is loyal & loves the club? Does that not say more about standards falling at the club than Gibbs’ passion?
I get your point about contracts but you could argue at least Theo’s performance effort/levels increased at SOME point..Gibbs has played at the same level for 8-10 years!
Why would he kick up a fuss when his time at Arsenal is Sooooooooo cozy.

I don’t think its a question of them not getting the hint. Its 100% down to them not wanting to go, and other clubs not willing to give them the same amount of money. If you were Jenkinson or Gibbs why would you want to leave Arsenal? Its your boyhood club, all your friends are there, you earn stupid money, and you’re not expected to ever make the first team. So all you have to do is meet the training schedule, make the odd appearance for the reserve side which would (should) be a level which you would find so… Read more »

if they were in any way ambitious, they’d be looking to move somewhere decent where they’d get game-time and the chance to rebuild / advance their careers

it’d be pretty short-sighted for them to stay at Arsenal in order to make a bit more money over the next 1-2 years (or whatever their contract length is). They’re not going to feature for us – so where do they imagine they’d end up after that? I guess Debuchy is a special case as he’s nearing retirement.

This is the problem, for some players, its attractive to stay even on periphery.

Elneny is a strange example to give. He’s been here for a season and a half and played 38 games (and missed a month for the African cup of nations). He’s probably not first XI material, but he’s getting games.

He’s a good guy for the bench. Can play anywhere from CM back (ex GK I think) with a good motor. He may not be top level but equally he’s never poor either.
A bit like many of the ‘subs’ years back when the team was only allowed 1 sub per game.

A different George
Reply to  IamaGoober

Debuchy, whatever else you think of him, tried very hard to force a transfer in order to get playing time. We refused, quite rightly, to allow him to go to Manchester United.

Hopefully they all complete the game unscathed. The last thing we want is an injury to them which would jeopardise their potential departures.

The Jeff is back from injury!
Or he was healthy already, but then why he didn’t fly to Australia?

I read somewhere that Wenger wants to move the Jeff out. I’m not sure of the quality of that information, or what could of caused the falling out.

I understand he wasn’t fit enough for the tour.

Does anyone knows if this match will be broadcasted somewhere? It’s not even mentioned on our official website.

Probably not. We always have one preseason game that’s not really anything to do with the first team (used to be a game against Barnet a few years back). This game would typically not be broadcast, much like a reserve game during the actual season.

sad (#TrumpVoice), but thanks for the info!

It Is What It Is
Reply to  Berlingoon

Barent was always a first team game, Arsene would manage despite the high number of young players usually in the squad. The Boreham Wood friendly has pretty much always been an Arsenal XI managed by the reserve/u21/u23 coach (Steve Getting this year), and part of that send string’s preparation.

Ah thanks. I got those mixed up.

Any news on the Arsenal XI playing Hitchin tonight?

Seems strange to be taking so long to sell the players that likely are going.

Game is on Thursday not tonight

I think this game is nothing but a goodwill gesture from us. Probably part of our on going deal with them.
The boss is using players he feels he doesn’t need as we have the fullest preseason fixture list in top flight already.
Saying that, I’m sure if individuals put in a good shift it won’t hurt them in the eyes if the boss

Hope Jenks signs off with a hat-trick.

Poor old Jenks. If he goes like this then it will be like every Gooner’s dream comes untrue. I really hoped he’d find a way to make a massive career with us.

Really for sorry for Gibbs here. Debuchy and Jenks have both been semi regulars for the u23s last season and haven’t really had a sniff of fist team action this calendar year, so the idea of playing a u23 friendly won’t be a too far a stretch for them.

Gibbs, however, played a host of games towards the tail end of the season with the shift to a back three. He may be surplus to requirements but it’s pretty cruel to relegate a 27 year old international to the reserve squad for that reason.

Gibbs I hope goes to a decent club.

He’s one of our Academy players and he could have been great but for injury interruptions.

Still plenty to have from him for any decent team if they can keep him fit.

Injury issues though may dictate price so I won’t price him too high. 8m minimum maybe, anything-else above is gravy.

Saw pictures of Wilshere back in training today, it gave me a quarter-chub I must be honest. The outside of the boot dribbling, low body stance.. in a dreamy dream of a dreamworld we could get him and Cazorla back fit for the whole season.

Game is on Thursday

Shop window. Got to get rid of. Ideally (in terms of “minimal” release price), my own take : Lucas Perez – 12m ( we can take a 5m loss) Campbell- 6 to 8m (not bad for Dicking around Costa Rica if so) Walcott – 25m Elneny – 6m (even Stevens) Jack – 5 to 6m (Injury issues) Jenko – 4-5m (lacks technicality but not heart) Gibbs – 8m (injury issues again otherwise higher) Debuchy – Take him to 4m ( Biggest loss IMO considering we paid 12m) That’s minimum 46m (without factoring in Theo) which could pay for a Lemar… Read more »

I’ve never liked Gibbs since he cleared that header off the line in the cup final and saved Wenger’s job.

That’s half a joke by the way before the thumbers come in.

B B
Reply to  Laughing Stock

I’ve never liked him since he had balled on the line against Chelsea. Oh wait.

Gibbs is decent, but never more than that. At this level every player has to be capable of changing a game for us (as Nacho can). Not just doing a job.

Can Arsenal just start doing some more Ox and Jenkinson YouTube videos before it’s too late?

If Jenkinsson is on his way out, he should be given then captaincy for this game. Imagine to be the captain of your boyhood club, just for once. I think it would be just as beautiful as the goal and celebration against Norwich…