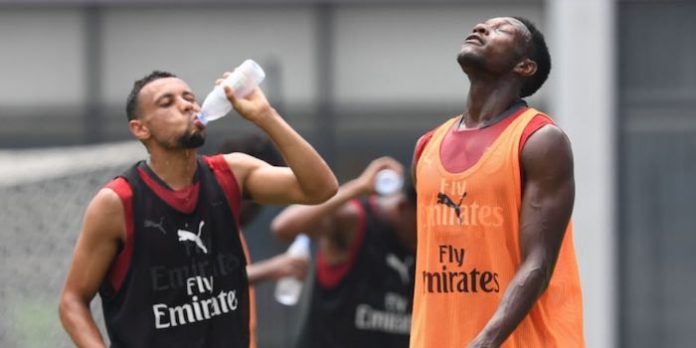 Arsene Wenger says that the weather conditions on the pre-season tour of Australia and China are not ideal for his team, but says the time away is a positive for the squad as they get to bond ahead of the new campaign.

The Gunners had two wins in Australia, and earlier today beat Bayern Munich in a penalty shoot-out after Alex Iwobi’s injury time equaliser saw the game finish 1-1 (watch the goal and penalties here).

A number of the players have been suffering from what the manager believes is food poisoning, with Per Mertesacker having to pull out pre-game and Sead Kolasinac removed before half-time.

All in all it’s been challenging, but Wenger was keen to find positives in there too.

“It was a bit of a shock coming here from Australia, where we were freezing at times!,” he said.

“We worked very hard on Monday and Tuesday, so I was a bit scared that tonight could have big problems.

“If you ask me is it ideal physically to prepare, certainly not. But it does have other advantages because we can meet fans all over the world so that is a positive.

“The bonding in the team is easier as well because we live together for two weeks, so on that front it can be very positive.

“But the real answer will be given by the way we start in the Premier League.”

You also have to take into account the travel, long-distance flights, on top of the diverse weather, and it’s hard to make a case that this is the best way to prepare for a season – even if all the big teams do it these days.

The Gunners return to England on Sunday following the game against Chelsea on Saturday and will have a week to train at home before the Emirates Cup the following weekend.

Does anyone else feel that with the amount tv money coming in, the % of overall revenue these tours generate are not worth the negative impact they have on the players pre-season preparations . Obviously I’m not a marketing expert but feel it’s almost a case of keeping up with the jones’. Would personally be up for one year seeing how we started the season as the only big team to have a more traditional pre season training. Don’t see the powers that be in the commercial department agreeing somehow though….

A lot of tv money comes from countries all over the world. And one of the reason for that are these kind of trips.

Classic Catch-22. When are the Gunners coming to Canada? haha

I think the money factor means that these preseason tournaments will be come the norm rather than the exception.

All in all, I was anxious that the team was being ran over by that old nemesis without any retaliation. To find that some of the team players were a little bit under the weather must surely be a comfort. Cuz, our mid left a lot to be desire.

That being said, our comeback into the game was a sure positive sign despite this just being a preseason friendly. I just do not take chances.
Here’s to a positive season ahead!

i would gladly welcome them back to austria..

Physical capability has never been a problem for us. Mental strength has. Therefore I feel, particularly as all the big teams have similar preseason trips, that this trip will be beneficial to us with the team bonding and togetherness it has brought to the squad.

it is best to clear tt experience in pre-season and not wait till the last game of e season, unless we have wrapped up the title of course. =D

Naaaa. No team would be that afraid on the last day of the season and crap their pants…

Hang on a second……

Always in our shadow!!

Completely disagree with all the negativity here. A bunch of lads off on tour round Australia and China – ok their not allowed to go out boozing but they must be having a great time. Who wants to go to some sterile yawnville in Switzerland or wherever? The bonds they forge now will help during the tough times next season

Just be happy it’s preseason. The day will come soon when each team loses some number of “home” games to a midseason holiday jaunt, where teams play each other in games that count in places like Los Angeles, Mexico City, and Shanghai.

As an American I can confirm this is what leagues do when they want to grow internationally.

Like everything in life, there are pros and cons. There are countless negative points in relation to the “trips” abroad. However the few benefits aspects (such as team bonding, establishing and maintaining international support, income generated) that you gain are crucial and possibly outweigh the benefits of a traditional training camp in Austria/Switzerland.

If upset tummies are no big deal then they have to come to India. only a billion people live here you know.