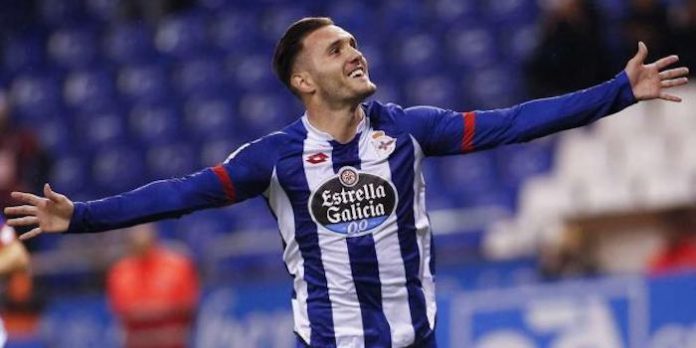 Deportivo La Coruna coach Pepe Mel has revealed that his president has promised that Lucas Perez will re-sign with the club next week.

We reported yesterday that the Spanish side have been working on a loan deal for the striker in the hope of signing him on a permanent basis next summer.

It remains to be seen whether Arsenal have sanctioned a temporary move or if Depor have returned with an improved offer nearer to Wenger’s €15 million valuation. An offer in the region of £9 million has already been rejected.

Pepe Mel confirms that Lucas will be in A Coruña next week. One step closer to a magical summer…

Pepe Mel has said that Depor's president has confirmed to him that Lucas Pérez will be signed. Probably will happen next week. Huge deal.

Deportivo open their La Liga campaign at home to Real Madrid on Sunday. It looks as though Lucas will miss that, but he could well make his return against Levante on 26 August.

Whatever, just get it sorted. Everyone is a loser if this deal doesn’t happen one way or another.

It didn’t work work out, we’ve wasted much more on lesser players. Move on!

it is a shame Arsene and some Arsenal fans didnt realize his potential.i would prefer him better than Draxler in which we are linked recently.and i would play Ozil and Lucas behind Lacazette if Sanchez gone this summer.

Lol you are trolling right? No one outside some vocal minority in the Arsenal fanbase thinks this guy is any better then another squad player. Thats all he is. Up until last season he’s been virtual unknown outside of Spain. Every team in the Prem seen what Perez’s Arsenal supporters have seen any none of them are pounding on Arsenals doors for him as a must have transfer.

If Wenger doesn’t like him/ isn’t going to use them then best for both sides. Hope it works out for him.

Out of sheer curiosity to those who thumb doen everything. Do you think we should keep a player Wenger won’t play/doesn’t like. Or do you disagree with wishing Perez good luck

You walked into that one, Atom!

This is why Alexis rubs my belly more often. I mean, woof.

indeed- there’s a lot of things that people can reasonably disagree on so I’m genuinely interested when someone disagrees with something I think that almost everyone would say is reasonable. I like hearing other points of view.

You walked into that one again Atom!!

A Sheep
Reply to  Atom

I’m a sheep.
I noticed you getting thumbed down and joined the herd.

The earlier this is done the better for all parties involved.

I hope this happens.

Special request for Arseblog, could all transfer figures be reported consistently in pounds, with euros in brackets if necessary. It helps get our heads around the millions being thrown around and prevents confusion when just scanning a story. Thanks!

EUR/GBP cross rate is roughly 0.90, dude. Then again, you can always outsource this to someone…

Antony, your bank screwed you ROYALLY! 😉

Why would he do that?

Get it done now. No more haggling over prices, we need the players we don’t need to go. I liked what I seen of Perez so good luck to him. I hope he breaks into the Spain squad for the world cup.

Joel Campbell the season before last, Lucas Perez last season, who will be this season’s ‘play well when given the chance but rarely given a chance’ player?

I Am Gunnaaaaa
Reply to  Jack

Martin
Reply to  I Am Gunnaaaaa

Sadly he will get chances probably in Europa league. Should have kept Szczesny and let him go.

It will be the midfielder we buy on transfer deadline day that isn’t the one we wanted.

Farewell spanish luke perry. You looked a decent player but arsene knows what you did!

Shame it didn’t work out. Hopefully we can get Lemar and a CM in.

I like lucas but we need to trim the squad lightning fast.

Now Marseille is you turn please take debuchy and after we need to get rid off gibbs, jenkinson, chambers on loan if we buy new cb, apkom on loan, and in final few weeks we should know what to do with wilshere.

We need to free the wages, Gabirel sadly gone with lucas, from all players i think the were far from a dead wood, but we need ruthlessness and not to be sentimental.

Before anyone jumps the gun and criticizing the club because it is only a loan deal it could only be done like that so Deportivo meet our valuation of 13.5mil. They have fixed agreement to pay 10,5mil pounds next summer, and a loan fee of 3mil pounds for this year, which they can pay the loan fee immediately and be able from tv money and new budget to pay the rest of the 10mil, which will of course do it as it is a fixed agreement and we also know lucas is worth it as depor knows. Also to state… Read more »

Wenger does a Mourinho by signing Lucas from Everton’s nose last summer.he knows he will strengthen his rival Everton.

Where did you get all these details ? Do you work for Arsenal ?

Its a shame, the lad was actually quality. So i think Wenger fucked up on this on. Such a bummer he didnt got his games.

Such qualilty that only Deportivo wants him? lol squad player at best thats it at a major club

I say good luck to him. I know some people think he has been unprofessional and moaned too much but I would rather have a player that wants to be starting every week and plays like they want to start every week when given the chance (which in my opinion he did), than have someone who is happy to sit on the bench and not put in the effort.
He’s a good player and deserves first team football. It’s a shame it hasn’t worked out for him here for whatever reason.

A P
Reply to  Merlin\'s Panini

I’d rather have a player who wants to start every week, but not go throw a public fit when he couldn’t.

We’ll surely miss him. He was a great player. Hope he’s going on loan to return some other days to prove himself. I wish him the best Lucus Perez… ????

Im just surprised why more clubs are not interested in signing him. I’d imagine 15M for a striker is a steal in this absurd transfer market.

He’s not going to be want for a buyer at that price.

A very useful player for many teams.

No news on Joel Campbell.

Jenko can’t seem to find much of a buyer either (I would think he could have value for a newly promoted team).

And Debucchy, someone please…we will pay money for you to take him.

Perez is a decent player but we need a level above. We have Lacazette. I think we will probably be able to accomodate one more with Alexis likely to go (the writing is on the wall with all this “not ready to play yet” nonsense) In recent month and over pre-season, we have adjusted slightly into a 3-2-3-2 Wenger has pushed forward a second striker into the box (particularly with teams that sit deep against us) and it is paying dividends (at least on the attacking front) Thus we saw a combination of Lacaztte and Welbeck but also Giroud and… Read more »