Getafe snap up Martinez on loan 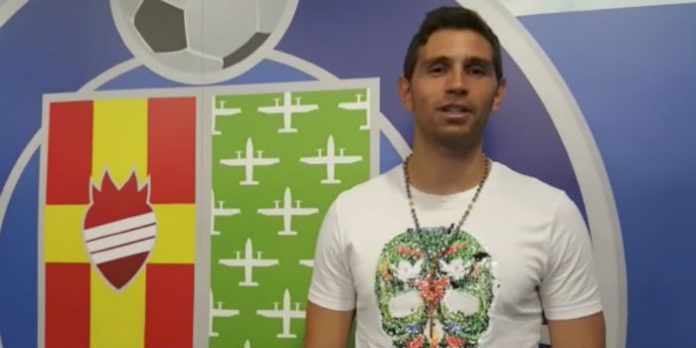 The 24-year-old has been Arsenal’s third choice keeper for the last two seasons and has made 50 appearances in the first team since moving to London from Argentina in 2010.

The move to Spain represents the fifth loan spell of his career after spells spent at Oxford United, Sheffield Wednesday, Rotherham United and Wolves.

Hopefully, he’ll garner some good experience in Spain playing against top quality opposition in some of the world’s most famous arenas.

There’s no doubt that Arsene Wenger rates Martinez and sees him as a long-term option when David Ospina, who this week said he’ll be staying at Arsenal, and Petr Cech move on.

Good luck to you Emi.

Previous articleLaurent Koscielny available for Community Shield
Next articleReport: Giroud happy to stay and fight for his place

Great move, provided he’s the first choice over there.

Great move only if we remembered to extend his contract before the loan.

A lot of people have been complaining about extending a player’s contract before sending them out on loan. Personally, I feel if you believe in the player’s quality but can’t guarantee them the game time they need to develop then this is a very ideal thing to do. As promising as Martinez is, we can’t guarantee him a spot even as second choice until he is tested consistently at a high level. Being second choice in the championship is not enough. If people go mad when we play Ospina how would their reaction be to playing Martinez. GK is not… Read more »

Wtf are you talking about mate

This could all be interpreted as a misunderstanding of some sort. AW probably said “loan him out to get a fee” thinking of raising cash for Sanchez wages.
Next, headlines “Martinez loaned out to Getafe” .
Our transfer dealings according to the press.

Being French I would have thought Wenger would have said Getafix lol or maybe get Obelisk in goal?

Definitely don’t agree Cech is so much better than Szczesny at this point if better than him now at all.

love and hate
Reply to  Gooooooooonnnnaaaaaaaaa

Just start your own blog or something mate, comments are no place for an essay ?

I haven’t seen a single complaint on the topic, quite the opposite infact.

Still really upset we let Szczesny go. Really believe we are going to regret that move.

Based on Getafe’s results last year, looks like he’ll get plenty of work.

Hope he plays a bunch. One of my favorite young guys on the team right now.

Spanish speaking country, decent weather, £10 says he’ll not be back.

Maybe but when he goes he will be worth very good money. Good keeper in my opinion.

It looks too good for his growth and confidence in goal. He is our future goal keeper.

No, he’s far better than Woj was, and a lot more mature. He has that calm presence that all good goalies have.

Kwame Ampadu Down
Reply to  Vonnie

Ah yes the ‘calm presence’ line again. People said that about Ospina too & that was proved to be utter crap.

Outside the top few clubs in spain the money is poor compared to the PL and the level of competition is weak below the to 4 or 5 (really poor), so there’s a very fair chance he will be back.

Who becomes the new number 3?

Blogs, can you do a test of typing the most inane comment as possible and see how many up votes you get?

Strange, I prefer him to Ospina.

I kinda agree with that, but I would miss the “Oooossssssspppp… “you know the rest” ….miss you Szczzers x

Good Luck, hope he will be the first choice keeper there??

Excellent news good luck but I rekon you won’t need it!

He’ll end up being the best goalkeeper in La Liga for 2 seasons on loan before we trade him for 5 tapas and an old Spanish cab driver.

Szczesny became a top class keeper at Roma and then was sold.

We’ve got a goalkeeper who can save penalties…aaaand he’s gone!

That’s 2. We let our best keeper go to Juventus.

A different George
Reply to  Martin

Well Martin, I know how much you dislike Ospina, but he is actually–and by a long way–our best keeper for penalties:

Martin
Reply to  A different George

i don’t dislike Ospina but he really is not a top class keeper. Maybe better than Cech at saving penalties but his decision making is suspect and lacks presence and composure and lacks the height. Szczesny is better than both of them and to let him go was insane

Career kiss of death right there.
Goodbye Martinez. Not looking forward to you moving to Madrid for 500 rupees and a pack of quavers soon.

In other news, who else is excited as I am to see Barca get bullied in transfer market!!!

Lol yea boy! Football tends to be cyclical and I anticipate Barca will continue on their downward trend for a little while. Poor them 😀

I wonder if Neymar has that PSG DNA now…

A different George
Reply to  An Ox-sized Coq

You put in a release clause that requires the payment of all the first-born of the country, and PSG says: “where do we sign?”

Has he really made 50 appearances for the first team? Surely not?

Must be one of the best 3rd choice keepers in tbe league. I think Wenger would have preferred to get a fee for Ospina but he refused to move, knowing he can get a lucrative signing on fee next summer as a bosman. So Wenger said fine, stay on the bench for another season.

If this is really what happened, then the club should have told Ospina he’d be third choice behind Martinez and not play in Europe. It is ridiculous that virtually the only players even remotely likely to leave this summer are players we wouldn’t mind keeping, whereas all the players we’d like to move on are stubbornly staying put so they can keep their fat wages for barely kicking a football. The club needs to get pushier (and maybe settle for less money in transfers). Our squad is bloated with mediocrity. Ospina seems like a nice bloke, but he’s not good… Read more »

Who said Ospina has one season left? I think the reason he stayed isn’t choice: it’s the lack of any interest in him

kas
Reply to  Kwame Ampadu Down

Agree Frank, all the dross, Wenger gave mega bucks to has backfired big time. Reports that we can’t buy until the dross goes is pathetic. Other top! teams just move the failures on ie. Man U – Depay, Citey – lots of dross moved on. Wengers failures are still here, another poor season is promised with his usual excuses.

5 first team appearances for us last year, 3 clean sheets. Sorry Emi, ANOTHER spell away to convince the masses of your mettle *roll eyes*. Wishing you the best, as others obviously won’t.

Best penalties goalkeeper we have had in some time.

Best of luck Emi!
Hopefully he gets to save a pen against poor old Barcelona who will be Neymarless.

Sell Szcz and make it look like we did it because we want to give Emi a chance, but then loan him out anyway. What was the point of all this? We’ve now got someone who stands behind the line as backup to Cech.

Matt Macey, come on down.

The whole Neymar thing obviously doesn’t remotely apply to the world of keepers. BUT its insane the going ons at PSG and Barca. Now they’re saying Barca (who stand to make a ton of money) not only have Dembele on the radar and Coutinho but Hazard and who know’s maybe they’ll do one over on Madrid for Mbappe or maybe they’ll decide Alexis does have Barca DNA after all. And PSG apparently are willing to countenence parting with Verrati, or Draxler or Rabiot or Di Maria as make weight (specially for Barca) BUT… clearly those players can be moved to… Read more »

Truckload of Jamón Ruffles as makeweight?

As a WWII and Spanish Civil War history buff I’m quite interested in Getafe’s logo. Anyone know the origin of their shield with what appears to be two engine bombers on the right side? Just curious.

As long as he gets to play it will be a great move for him, just hope we can get him back in case of a season ending injury to either Cech or Ospina.

Nice to see all the media stories on this finally came true…. 😀

This website uses cookies to improve your experience while you navigate through the website. Out of these, the cookies that are categorized as necessary are stored on your browser as they are essential for the working of basic functionalities of the website. We also use third-party cookies that help us analyze and understand how you use this website. These cookies will be stored in your browser only with your consent. You also have the option to opt-out of these cookies. But opting out of some of these cookies may affect your browsing experience.
Necessary Always Enabled
Necessary cookies are absolutely essential for the website to function properly. These cookies ensure basic functionalities and security features of the website, anonymously.
Functional
Functional cookies help to perform certain functionalities like sharing the content of the website on social media platforms, collect feedbacks, and other third-party features.
Performance
Performance cookies are used to understand and analyze the key performance indexes of the website which helps in delivering a better user experience for the visitors.
Analytics
Analytical cookies are used to understand how visitors interact with the website. These cookies help provide information on metrics the number of visitors, bounce rate, traffic source, etc.
Advertisement
Advertisement cookies are used to provide visitors with relevant ads and marketing campaigns. These cookies track visitors across websites and collect information to provide customized ads.
Others
Other uncategorized cookies are those that are being analyzed and have not been classified into a category as yet.
SAVE & ACCEPT
wpDiscuz
61
0
Would love your thoughts, please comment.x
()
x
| Reply