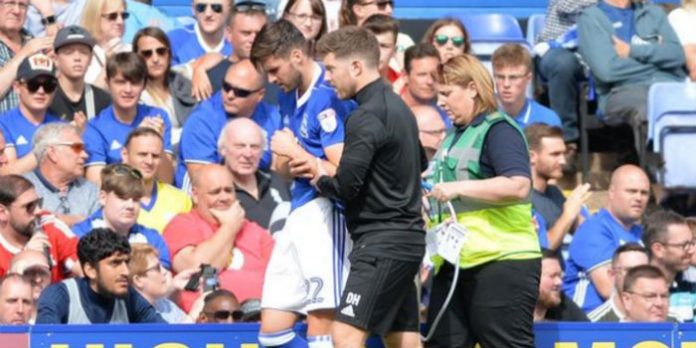 Carl Jenkinson’s debut for Birmingham City lasted just 33 minutes as he suffered a dislocated shoulder in the Blues’ 2-0 defeat to Reading.

The right-back, who joined the Championship side on loan for the season this week, collided with team-mate Michael Morrison and required lengthy treatment.

According to reports from local media, Jenkinson had made a bright start to his first competitive game since November. It remains to be seen how long he’ll now be sidelined but it could be quite some time.

We’re never gonna sell him at this rate.

Clearly the Corporal was the glue holding the Birmingham defence together – goes off and the team concedes 2.

Get well soon, lad. No chance for anything further at Arsenal, but it’d be nice to see him do well for himself somewhere else.

Savage. Some guys have no luck. Hope you get better soon Jenko!

And again, who could dislike this??

It Is What It Is
Reply to  Adam Guillette

Anyone with fat thumbs, a spuds fan, any other fan, journos, Robbie Savage, anyone of many opinionated readers. Who gives a flying turd? Start with the premise that no two minds are identical, then work your way to a conclusion that suits you. FFS May just start thumbing down all comments just to troll you. I won’t, but I could. Then again, that depends on how many more time I read “ooh, who would do this” or “aah, why do that”….cos we’re all different, psychopaths, those with English as a 2nd/3rd language, veggie brains etc. But, I full expect you… Read more »

nimble foot
Reply to  It Is What It Is

So sorry what a shame.

Wishing him a good, healthy, speedy recovery. I think he could do with a good footballing season

Carl to Ox via the phone later…”I only dislocated my shoulder on debut mate but they went to shit once I’d gone, Banter!!”

Not good considering he’s already had both his shoulders done. Gets well soon Jenko.

A Gunner with Psychic and Healing powers

I wish him all the best. I hope he recovers soon.

What is this with English players and long time multiple injuries? Wishers Jenkinson Andy Caroll Daniel Sturridge gets injured so frequently that there insurer must be cursing them

Well man u just finished 2 nil another clean sheet 3 in 3 now,, how many are we gonna concede tomorrow when we get beat by Liverpool, sorry to others supporters but I don’t feel very confident at the moment

Piss poor luck for the lad. 🙁

To some people, when it rains, it powers!

Somewhere in the background you can almost hear his father sadly sing. “turn around bright eyes”

Well I messed up my name. Hope that wasn’t as Freudian as it looks.

So sad. Get well quick, Bro.

The guy just cannot get any luck can he? Feel for him, hopefully not too long on the sidelines for him.

A Gunner with Psychic and Healing powers

By the way ! where is Mathieu Debuchy ? has he been abducted or something !
I heard he has 2 more years on his contract ! how is that even possible ?

Original Paul
Reply to  A Gunner with Psychic and Healing powers

He’s playing upfront for the under 23s.

Arsenal through and through.

‘Member, only a year or two ago, when most people here thought he was Arsenal first team material?

Wish him the best, hope he makes a decent career, but as an Arsenal fan what concerns me most now is he gets off our books.