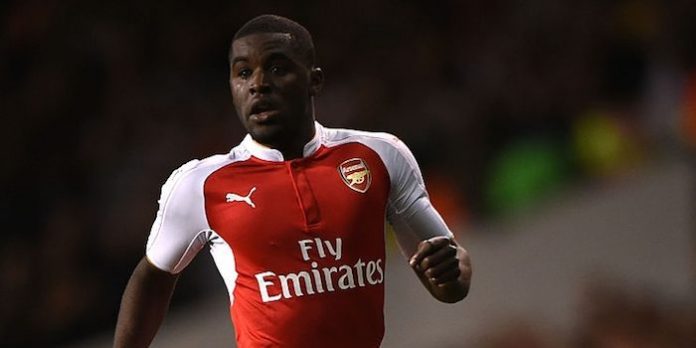 If there’s a loan move, he’s on it, and he’s about to embark on his sixth loan move since signing for the club in 2011.

So far he’s been to Real Betis, Lorient, Olympiacos, Villarreal, and Sporting Lisbon, and he’s heading back to Spain as we speak for another spell at the Seville based club.

He’s long since been considered surplus to requirements at Arsenal, but an earlier departure this summer wasn’t just down to us being rubbish at moving players on, but because of a knee injury he suffered on international duty this summer.

Follow all the action on our transfer deadline day live blog

Isn’t he out on contract next summer?
So pretty much gone?

Think he signed a contract before his last loan

Sign up the players we don’t want, let the ones we do want run their contracts down. Makes sense to me

Get out while you can Joel!

Haha, that quote never gets old

We must have made a pretty penny on all these loans.
Not the normal investment plan but getting 2million euros a season or there abouts for him means we’ve probably netted about £10m quid off a player we bought for a few hundred thousand.
Wish him well and he hope he settles somewhere after he runs the contract down, I liked him in the 15-16 season.

I don’t think we’re making any money on these loans. These are all players we’d much rather sell but can’t. We’re loaning them out to get them off our wage bill, we’re probably supplementing the wages even, real Betis won’t afford the 50 or 60,00o he’s on.

Are you lonesome tonight?

What year is this article from?

One of our most natural wide players, not averse to grafting and hard work,
so of course we send him back out on loan……..

Joe Campbell is the football equivalent of buy-to-let

I pray for his sake he is out of contract soon and go somewhere permanently. Hard to believe we can’t find anyone to pay us a few million and take him permanently.

Guillem balague is full of shit

Any chance of getting Wenger out on loan?

Feel bad for the guy. He was probably thrilled to initially sign for Arsenal and then the visa issues wrecked his ability to get in England early. Wish we had just sold him so he can get on with it

Why Theo and Ox deserved more chances than him?

Only thing JC had to do is light it up on one of these loans. He never did. Not one of these loans he came back lighting the football world on fire. Clubs would have lined up to buy him lol JC is nothing but a fringe squad player at AFC. You guys are insane that think JC is this player that would be better then Ox or TW. I think TW should have been gone years ago or at least before his last contract and Ox is too inconsistent for what he wants.

Get out while you ca.. ohh

Looks like the entire club is on sale. They want to start with players first.

We all saw his ability in 2015/16 season ,and many fans asked Wenger then why Campbell was not being given game time based on his performance . Mum was the word . Joe Campbell ,the young international , he is still a Costa Rica international was scouted and brought to Arsenal by Dick Law , so he must not be allowed to play for Arsenal .Loan ,loan , loan all the way for the left footed attacker while Wenger continues to play right footed Oxlade,Welbeck, Bellerin Iwobi and others out of position to the detriment of the team and the… Read more »

Lol why hasn’t any clubs come and offer to buy him especially after the 15/16 season? The reason is he isn’t that good. He is a fringe player at a club like Arsenal. Get over it. He isn’t better then the players you just mentioned.

Nice guy and hard worker but not good enough. He never lit it up on these loan deals.

Im afraid when il get to buy Wenger’s autobiography I’m going to ruin it by skippin to whatever page it is he describes Joel Campbell not playing more or at least get half a chance (loan him in winter) to impress more.
And I say ‘more’ because I don’t think anyone can deny that he has impressed. To me he is better then Ox at least, never mind Theo (who has end product tho). I feel sorry for the guy.