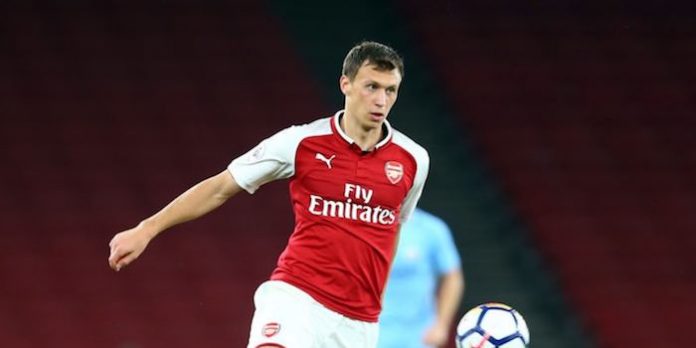 Nottingham Forest are reportedly interested in taking Krystian Bielik on loan for the 2017-18 season.

The 19 year old is now at a stage in his career when he needs to play regularly, and had spell with Birmingham City last year.

He had been linked with a move to Norwich City last month before that fell through, and it’s now suggested he could spend the upcoming campaign at the City Ground.

Current Forest boss Mark Warburton has a good relationship with Arsene Wenger, taking Gedion Zelalem on loan while he was in charge of Rangers, and while boss of Brentford brought in a number of young Arsenal players on short-term deals.

He was also linked with the then vacant academy role following the departure of Andries Jonker, a position that will be filled next year by Per Mertesacker.

The Gunners have, at the moment, an abundance of centre-halves, blocking Bielik’s path to first team action but a good season out on loan could see him come back to compete next year.

However, there is the danger that an arm injury he picked up in midweek during the U23 clash with Man City may scupper the move, so we’ll wait and see what happens.

Not sure why my comments are usually blocked but this twat isn’t?

Good luck to the lad. He looks decent

TonyP
Reply to  love and hate

Keep him. Tell him he’ll start all league cup games. Keep him motivated. Give him the chance. And from there, who knows? He may be ready to play a bigger role. How do we know if he’s ready if he doesn’t get a go.

Nobody wants to play for us anymore
Alexis ,Ozil, Ox, Mustafi
who’s next

Where is the Kick&Ban button?

they wouldve signed by now if they wanted to. hurts but thats the truth.

Pretty sure it’s a long term injury, well I’m sure i read that somewhere which would mean they’d no longer be interested

Shouldn’t we be keeping him if we’re putting Mustafi on a boat?

Would rather he leaves on loan for a full season of first team football. We have Le Coq and Elneny, and AMNiles

Valid point. But, I have zero faith in our club nurturing a good, young defensive prospect. I feel he would improve much more through a loan elsewhere

I keep forgetting about Ainsley MN. Flies a bit under the radar but I know he trains with the first team. Thought he look excellent against MC. Granted, it’s u23 but he exudes confidence. Guess he’s being saved for the Cups.

Move this guy back to Midfield!! He is a DM. Clearly being wasted as a CB. We could’ve groomed him as a Xhaka/Coq replacement. This frustrates the hell of me.

He’s out for eight weeks so going nowhere is the latest I read somewhere. He played 70 minutes with an injured shoulder in that Man City game the other night so it wouldn’t surprise me. There’s a lot to like about him, although I think he’s more a defensive midfielder than centre back. Arsene has a thing about playing people out of their strongest position, to their detriment sometimes, and I think the lack of good defensive players in our youth sides has resulted in him being converted to a centre back. If he stays then he would hopefully play… Read more »

Playing players out of their natural position when young is vital imho.
Helps them understand their teammates roles and in a case such as this focus’ the former part of DM(‘defensive’). If hummels/lahm/alaba or whoever can play multiple positions it’s heralded but if you try and reach that to other players it’s seen as lunacy.
However having a team setup like you’ve just changed the formation on FM and all the players are red to orange positionally is a different story.

But he’s not playing him to learn, he’s converting him to CB ala Djourou and co. As a DM he looked amazing, but looked okay as a CB.

It’s one of Wenger’s Wengerisms born from the fact he doesn’t actually like dedicated DMs anymore.

Plenty of potential for Bielik