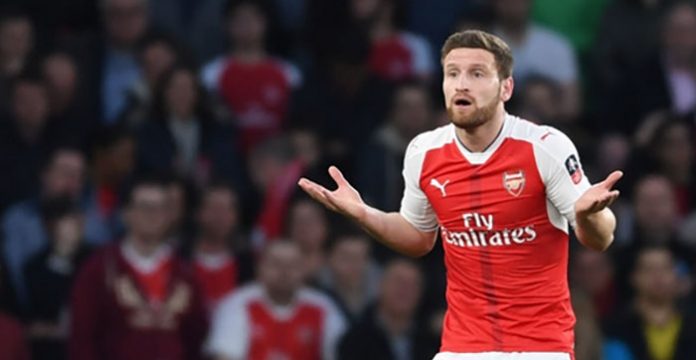 According to Sky Sports in Italy, Arsenal have turned down an approach from Inter Milan to sign Shkodran Mustafi on loan for the season.

The Germany international moved to London from Valencia last summer in a deal worth nearly £37 million. He went on to make 37 appearances in a steady debut season often partnering Laurent Koscielny before we switched to a three-man defence.

Mustafi has already played in Serie A for Sampdoria so a link with an Italian club isn’t impossible to countenance. That said, with Gabriel set to sign for Valencia, Calum Chambers linked with an exit and Per Mertesacker retiring at the end of the season it’s a little surprising that the report hints we’d be open to offloading the player permanently, particularly if we can recoup much of last year’s outlay.

Arsene Wenger does have several options at the back, in addition to Koscielny and Rob Holding, Nacho Monreal and Sead Kolasinac are both versatile enough to play both on the left and in the centre.

Is it possible that we’re tempted to make some cash this summer knowing we’re going to lose big names in 12 months for free? Do we have our eye on someone else in this window? Are we weighing this up because Mustafi is easier to offload at a time when the squad needs trimming and the likes of Kieran Gibbs, Carl Jenkinson and Carl Jenkinson don’t seem to be able to find clubs? Is it all b*llocks?

We’re leaning towards the latter, but stranger things have happened.

Mustafi spent the summer in Russia helping his country to Confederations Cup success but despite an extended break was immediately added to the bench for the opening game of the season. He’s in contention to start tomorrow’s game with Stoke City.

Jenko’s so incapable of finding a club he had to be listed twice, eh?

So good they named him twice

Sell him quickly and bring in Samba from wherever he is now; at least the pundits will be happy.

Keep Mustafi, get Kos back, sign van Dijk. That would be the dream. You could win a title off that defence. Bellerin and Kolasinac as wing backs.

You can’t win a title with those three defending on their own whilst everyone else bombs upfield.

It would be fun trying though eh? 🙂

No, no it wouldn’t. Unless you are some sort of masochist.

Bdagooner,surely that’s a prerequisite for supporting the Arse. ?

I am a Gooner. Therefore i am a masochist.

To be fair you probably can. You need really good defenders.

Everyone gets in to the habit of lauding defensive players because their teams don’t concede many, when the quality of defender actually makes a small difference. Otherwise, you wouldn’t have a record-breaking CL defence composed of Eboue, Senderos, Djourou and Flamini (funnily enough, they actually had specific defensive coaching at the time), or have Leicester being adept at keeping clean-sheets in the second half of their title winning season (with Huth and Morgan at CB – not exactly world-beaters).

Need better defenders to play that way is what I’m suggesting. Better attackers too. You score 2 goals we’ll score 3.

Hope he’s not seeing Kola as a centre back, think he’d be wasted there.

Can see him heading to barca in the next couple years. Such a classy player. Saying that, Lovren looked like a world beater at soton too..

Not happening, we sure aren’t this mental. What are they smoking over there in Italy?

Wouldn’t put it past us. Keep thinking they can’t find new ways of explicitly putting revenue over trophies, but…

We started the latest game with two LBs in the centre FFS. We should be telling bidders for one of our 2.5 actual CBs to go stuff it, not playing The Price is Right.

Ah, the Price is Right. The Bob Barker era was the best. As a kid, though, I was always baffled how one day the final round prize might be a trip to Paris while the next it could be a set of pots and pans. Imagine how ripped off you’d feel if, after finally getting to be a contestant, your big prize was some kitchen stuff?

Who the fuck is Bob Barker? I only remember Sir Brucie (RIP).

None of our centre halves were unavailable so had no choice.unlikely to happen again. We did win however

Don’t know but I want some

Where’s the poo meter?……Absolute shite i tell ya

I know Jenkinson has his limitations but I’m surprised no-one is taking a punt on him. I doubt his wages are that high nor that his transfer fee would be.

His wages are very for a fringe player. 48k a week apparently, thats one of the reasons we have trouble selling some players as their wages are far to high. We pay average players way above their worth and way above what other cubs would be prepared to pay, so some are happy to keep the contract and stay on the fringes.

That just makes me admire players like Perez more. They are ready to take a pay cut just to play more and to play for their country. Players like jenkinson Gibbs walcot would rather not play t big clubs than take a pay cut.

Lucas is ready to leave but It’s Arsenal who are refusing to sell, Perez’s agent probably has already agreed terms with Depor..

Yeah because professional athletes careers last for 40 years? lol These guys were at least worth or almost worth as much as they signed for. It just turned out they either got hurt or ended up not being as good. If you play for a top club then you expect to get paid accordingly. You can’t expect to get quality squad depth by paying wages like WBA pays?

The irony of it all

We pay players well to stop them swanning off to Chels/liddypoo/mancy or Manchu and wot do we get ?
In to the proverbial that’s what

Lol. Thats like us making an approach for Sergio Ramos.

Yeah, but has Ramos ever won the Confederations Cup? I’m not impressed.

Apart from the fact that Sergio Ramos is a cheating cunt.

And gets deservedly sent off in every Clasico. Tw*t.

I’m not buying in to the narrative that since we can’t sell our worst defender’s, we’ll sell our best one’s. He’s staying

Goona get ya
Reply to  Michael Bolton Wanderers

Fuck off Inter AC are shit and you’re worse than them! Haha dream on.

Missed opportunity to get some decent money for a dissappointing player. Considering he is a German international he made a number of schoolboy errors last year. Not even half as good as Koscieln and prone to giving away free kicks in dangerous areas an An overated player….take the money Arsenal and we’ll throw in Walcott….now also a squad player at most.

A different George
Reply to  leo

A terrific defender who sometimes makes rash mistakes. It reminded me of Koscielny a few years back, though I think he is a little more polished than Koscielny was at this stage of his Arsenal career. I think he will be our first-choice defender for the next decade.

If it isn’t bollocks then the club is a total fucking mess. Let’s keep Sanchez, who will go for free next year and sell, in a position we need depth, a German international who is on a long contract? It’s Friday, Italian season about to start. Nah, my money is on bollocks too.

Can we all just relax…..the title is “Arsenal REJECT inter approach for Mustafi”, keyword being REJECT. All clubs a free to bid for any player, and we rejected the bid because we have no intentions of selling…..and in all honesty I cant wait for this transfer window to close, hopefully all these bullshit articles flying around will stop!

Never knew Inter were so much into FIFA career mode. I would have just listed Mustafi for fun and given a counter offer for 80 million for every offer I get.

I couldn’t agree with you more.

The only way this is true is if we are making a play for Van Djik.
Otherwise, makes no sense.

What a joke. Do they want ozil and lacazette on loan while they are at it?

I have a sneaky feeling this could have legs.
Heard earlier in the summer we were open to selling if we could recuperate what we paid.

Ah our very own ITK

Hearing your own mumbles do not count.

A different George
Reply to  A P

Can I use this comment sometime in the future?

Do you write for The Metro ?

Good lord, I hope this is nonsense. (Not the fact that we’ve rejected the bid, but that it was perhaps in anyway or any time even in consideration). Defensively we look somewhat weak, & we seem to be acting like we’ll have less games with no CL rather than the reality of more games we’ll get with Europa (unless we throw the towel in early on that – but can’t see that as acceptable). We know we have (& will have) injury issues too. Yes, we are in need of offloading some players, but this makes it all the more… Read more »

Red thumbs at the ready….

Wouldnt be adverse to this if we had a quality replacement lined up.

No thank you Inter. Keep walking

Sell him and get Virgil. Theo too

We already have Theo….unless you are talking about Theon Greyjoy (Game of Thrones)!!!!….in that case we might as well get Jon Snow too…..

The cheek of it. Why would we loan out one of our first choice centre backs who we only bough last year for £30m? I say we should put in a derisory €3m bid for one of their best players. Problem is their players are pretty much a bunch of mid table trash.

Sell him, buy van dijk. Play him, kos and monreal. Holding, chambers, mertesacker as cover/rotation. For me that’s a top first choice and very good back up.

Only if we get their fabulously named striker ZE TURBO (no, really: https://en.wikipedia.org/wiki/Z%C3%A9_Turbo) in return. I bet he’s faster than Theo.

A different George
Reply to  Wolf

Is he as good as his German cousin Der Porsche?

That was a long shot by Inter. Mustafi has had an excellent season for us considering it is his first. Remember how Koscielny’s first season was littered with reds, own goals and penalties conceded. I suspect our back line is now pretty firm and will be as follows (with variation of course) : Ox/Kolasinac……………………………………………………………Bellerin/Nelson ……………….Koscielny/Monreal…………………….Holding/Chambers…………. ……………………………………….Mustafi/Per………………………………………. Of course Koscielny can also shift centre, Mustai wide right, Kolasinac in lieu of Monreal and vice versa. Plenty of opportunity now for BOTh HOlding and Chambers to compete and step up. I think wing back, sans a Lemar, we should go with Bellerin,… Read more »

Kolossus from the Balkans IMO is better used as a wing back. Left of back 3 shuld be an emergency employment. Monreal can be used either as left wing back or left of back 3 with his experience. Ox can be played on either flank as wing back but clearly his crosses from the right favour employment with Giroud. Bellerin is better strict RWB but with Ox pushing. Koscielny should cover the middle of back 3 but can also play left of back 3. He should be our main sweeper. Mustafi can also play middle of back 3 but we… Read more »

Sure, he goes in for the slide tackle more than I’d like. But that’d be madness.

Mistake, he is utter rubbish! Out of his depth, always going to ground

Swap him for Marcelo Brozovic & buy VVD. You can sell Theo, Xhaka Welbeck & all the other dead wood like Gibbs, Jenkinson, etc while you’re at it.