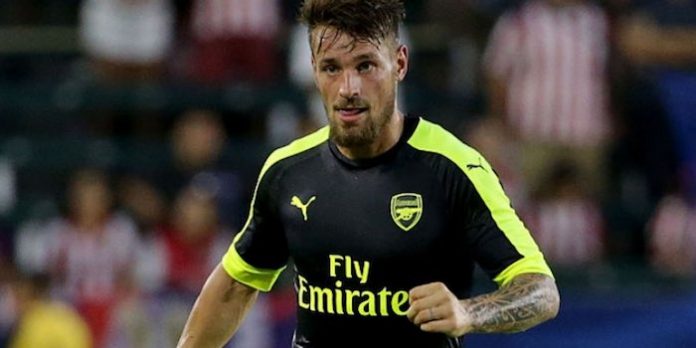 According to France Football, Marseille are weighing up a move for Mathieu Debuchy.

Hang on, hang on…don’t leave! Yes, we know we’ve been here before, but you never know, it might happen. Maybe.

The 32-year-old is apparently desperate to leave the Emirates and is hoping that Arsenal might make it a bit easier for him by releasing him for free despite the fact he’s under contract for another two years. Apparently, the right-back still harbours hopes of playing for France in next summer’s World Cup. Hmm.

In July it looked, for about 15 minutes at least, like Debuchy might move to Nice only for the Ligue 1 side to turn their attentions to Christophe Jallet. Since then there’s not been much interest. Given Arsene Wenger’s swollen squad it’s almost certain he won’t be registered for action in the Premier League so if he doesn’t move he’ll probably be confined to star jumps with Jens for most of the week.

Last season he made just one appearance for the Gunners, lasting just 15 minutes against Bournemouth in November. The cameo pretty much summed up his time at the Emirates since he joined from Newcastle for a fee in the region of £10 million.

At this point, any rumour linking Debuchy with a half-decent move is to be welcomed. While Wenger has coyly admitted opening the door for some players to leave this summer, it’s fair to say he blew up the whole front of the house for his compatriot quite some time ago and has been standing and pointing at the exit. He’s just not allowed to join Manchester United.

Wonder how Arnautovic feels knowing he pretty much ruined Debuchy’s Arsenal career pushing him into that advertising board? We’ll need to unleash Holding on him again when we play West Ham.

Just get Kolasinac to run at him, he’ll turn tail and put himself into the advertising just trying to escape.

Just seeing that Arnautovic’s mug winds me up. His demeanor might actually surpass Terry for cuntiness. If he spent the rest of his days sidelined with injuries sustained from the various things if they league I for one wouldn’t complain.

…various things of the league…

Finding it hard to believe Twatsloch is your real name now.

Could you check what is onscreen before you post? Hard work to check 5 words but would be worth it.

If it’s that important to you, Paul, I promise to try my best. Only for you though.

You must be that Fake Paul.
The ‘Original Paul’ is far more accommodating.

The other day the director of football at FC Twente said Arnautovic was close to signing for Arsenal back in 2010/2011 but he got injured on the last matchday. Was a cup final I think.

For once the injury gods were in our favor.

I honestly don’t think he gives it a second thought. Why would he? He plays for Stoke. That’s what Stoke players do, they injure other players, and Debuhcy is an Arsenal player the worst kind of player. The British media have made it completely acceptable for any opposing player to kick any Arsenal player as hard as possible as way of leveling the playing field due to our superiority on the ball. Its not a foul, its just ‘pashun, or digging in’ and lets not forget, Robert Pires did invent diving – so, it is our fault. However the moment… Read more »

Ho hum. I often think of Claude Debussy when I see his name. You guys like Debussy? I’m more of a Ravel man myself.

Clare de Lune has a calming influence during stressful times.

Clare de Lune is for the end of the season when I’m eating diazepam. But before that, starting in September, Arsenal tend to follow a Bolero-like crescendo into a smashy March train wreck.

Diazepam. Why didn’t I think of that.

Last season was Wagner’s Götterdämmerung from February and March which ebbed out as Strauss’ Also Sprach Zarathustra took hold and ended with the FA Cup final.

Our annual game against Bayern Munich feels like it should be set to Mussorgsky’s Night on the Bare Mountain to me.

My biggest accomplishment to date as an amateur classically-trained pianist was learning his ‘Doctor Gradus ad Parnassum’. Such fun. Ravel’s ‘Le Tambeau de Couperin’ is always great too.

Hats off to being able to play something as beautiful as that!

Thanks! That one is my favorite piece 🙂

Ravel Morrisson ? Never lived up to his expectations

The Sead was great
Reply to  Third Plebeian

He’s on 70 grand a week. We should get rid asap

If he wants to cancel his contract – i.e. no more wages owed – i would do that this minute, before he realizes he’s not gonna get an offer anywhere near his current salary even on a free.

I don’t think that’s the point. He needs to play and we need to offload a player we have no use for anymore.

If he badly wants to play and even try to make the French team then he should offer any potential club the offer that he’s willing to sign on the cheap. I can’t imagine Arsenal wanting anything for him more then 1m at the most? Of course he doesn’t want to do that probably hoping to get loaned out with Arsenal paying most of his wages for the season.

why should he accept lower wages, would you accept lower wages at your place of work, if so please tell your boss, he will be pleased. Football is Debuchy’s job, would be foolish of him to take a big pay cut. Even £20K a week cut is over £1M of a loss for the year.

Yeah! How could you expect our poor, little French flower to exist on a paltry £50k per week! Thank God we’ve got food banks.

Why show disrespect who was a fine player before his injury.

Huge mistake not selling him to united when we had the chance. Could have recouped most of the transfer fee back & got 90,000 a week off the wage bill. Oh well at least united didn’t stop us from making champions league.

I don’t think it was a transfer to ManU but a loan deal. So that wouldn’t have solved anything but get the wages off couple of seasons ago. While were at it if we are just going to throw out numbers why don’t we just say he’s making 150,000 a week to get more angrier? lol

Is it not better for Arsenal to let Debuchy and any other unsaleable fringe player leave for free. It will free our wage bill at least.

I don’t think Arsenal care about the transfer fee, I think MD wants to get paid the full amount or near that amount and still move on.

Such a simple solution let him go for free

Guys been v unlucky with injuries

also if you let him go for no fee, then every other player we no longer want can cite his case and say you let him have a free, so you can let me have a free.

2 years left on his deal? Who greenlighted that offer to a then 30-year old right back? Kind of embarrassing.

Wasn’t it a 4year deal? He was one of the best RB in France and starting RB for the French team at the time.

What is there to weigh? Buy him now. We’ll even throw in Sonogo for free. Yes, you’re right, he is no longer on our team but that’s what makes it fascinating. How about Debuchy and Joel Campbell for the price of one?

ANY fee will do.

Why do the good players contracts seem to run out so quickly and these guys’ just seem to go on forever and ever..Jesus..he wants out, we want him out, let’s just get rid of the guy ffs

I would happily drive him to Marseille myself. Not that I don’t wish him well. We just need him off the books. He’s still a decent full back, just incredibly unlucky and hasn’t covered himself in glory with his behaviour.