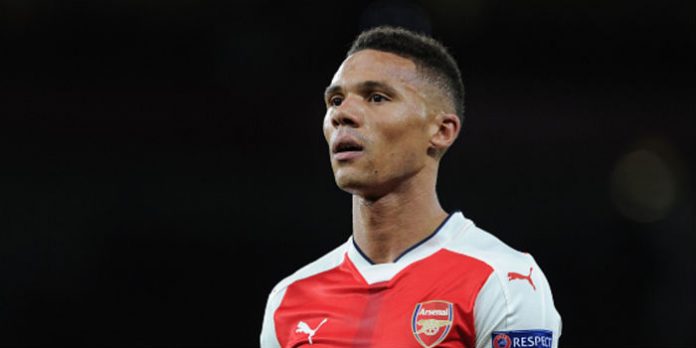 According to the Evening Standard, Watford are weighing up a move for Kieran Gibbs after Arsenal lowered their £15 million asking price.

Following the signing of Sead Kolasinac, Arsene Wenger has deemed the England international surplus to requirements at the Emirates alerting a number of clubs, including Newcastle United and Brighton. There’s also been a somewhat spurious link with Galatasaray.

The left-back hasn’t taken part in any first team pre-season preparations this summer with Arsene Wenger happy to deploy Hector Bellerin and Alex Oxlade-Chamberlain out of position instead.

Young pretender Cohen Bramall did see action in Australia and China but has since been sent to Birmingham City to gain experience, while Nacho Monreal appears to have nailed down a position as a left-sided centre-back.

Gibbs made his debut for the Gunners ten years ago and has since made 229 appearances. Last season he captained the first team on a number of occasions in the absence of Laurent Koscielnny and Per Mertesacker.

Sad to see him go. Hope he has a good career.

Another centre back out the door

I thought that was a bit unfair to call him that.

Before his injuries was together with Baines the best English left back. Why the sarcasm ?

He was much better than error prone Clichy.

Cashly is easily one of the best left backs in the past quarter century. Unfair to compare anyone to him.

I\'m Professor Ignorance, on that subject
Reply to  Martin

Great lad, good move for him.

However with Gabriel gone and Monreal and Kolasinovic playing in the back three at times, don’t we need an experienced left back/WB?

Maybe we should go and buy an experienced CM and use him as LWB.

Don’t we need Gibbs as cover at LB/LWB?

What on earth is wrong with our transfer policy? Chelsea sells their loanees for 3 times as much? Of all the top 6 teams we have never sold any player for more than 25m…. Sczensny for 10m? Gibbs for a cut-price?

Difference is Gibbs is on over 60k a week.

It is all because of the inflated salaries that we have been paying some of our players and nothing else. Noone is ready to pay them such salaries.
Equality in pay policy backfiring massively.

Wait until you see £180000 given to Ox. This will destroy the wage structure and Arsenal itself. Ramsey, Monreal, Kos and even Walcott deserve to be paid more than him. Just read he even rejected that. Wenger is lowering this club. We are begging Ox who is bad copy of Gervinho cause Gervinho is an even better dribbler and score more goals than Ox. Yes, Gerv had missed empty nets but has better career statistics.

Funny cos Gerv is currently one of the best paid players in the world. His contract in China is ridiculous.

Before he joined Chelsea, Hazard said this of Gerv:
“Great players inspire you. The best player I played with was Gervi [Gervinho].We didn’t have the same qualities, but we both tried to make the difference. He taught me some things. He makes the right runs.
Totti said if Gerv was a guy who scores lot of goals he would be like Ronaldo.
I wouldn’t anything close to what they said but Gerv had qualities.

Gerv’s main quality on the pitch was that no opposition player had any clue what the fuck he was going to do…because he didn’t himself!

Kwame Ampadu Down
Reply to  ontheup

Are of those Chelsea loanees 28 (next month) & not really improved at all for a number of seasons ? Those players are being bought for potential, not the case with Gibbs.

Isn’t everyone complaining that we can’t sell off our players fast enough? Now when they lower the price it’s bad because we aren’t getting enough.

You need to convince yourself of the truth, no one wants a player on these wages for 15M a year. The teams who can afford it have better LB already.

We’re desparate. Clubs know we’re desparate. We have a squad thats far too big and we need to clear some off. Our bargaining position is extremely weak. Gibbs also has left than 12 months remaining and we’ve already signed his replacement. It was the reason I was suggesting a fire sale of bargains in June+July. If we’d have cleared the decks early? we’d have had more wages to give to players we want to keep and more space for players we want to sign. As it stands we’re not equitpt to win the PL, we’re stocked with players we can’t… Read more »

Mathematically we already had too many players during previous years. We brought two in (Sead and Lacazette), we sold Szczesny, Gabriel and released Sanogo. I am only talking first team players otherwise we sold Toral and many others arleady.

One thing it proves that since Rvp we don’t sell our best players.

Gibbs is by no means a top level fullback, but will be sad to see him go. Always kept his head down and is a perfectly serviceable back up left back. I hope he finds success wherever he goes, and who knows maybe can get a few more England caps as well if he plays regularly.

I always rated Gibbo more than most. Feel bit sad he’s going but wish him luck.

Cut-Price Gibbs, is that a basketball player?

sorry mate, you tried too hard

No it’s a toothpaste offer

I\'m Professor Ignorance, on that subject
Reply to  bendtnerschristmastree

It’s a sale at the deli, I think

Well, atleast the ref wont mix up the ox and gibbo

A different George
Reply to  Lindhe

I could see Andre Marriner sending the wrong one off even if they played in different teams.

The head boy of the So called English core is sadly leaving. What royal servant! No complaining; just humble

Personally always thought Gibbs was as good as Monreal if not better. And considering that he is English and also younger than Monreal, he should have been the first choice left back.. But Wenger’s mind works in the most mysterious ways..

Heh? Do you even football dude

Didn’t Monreal step in and up his game while Gibbs was out injured? Sadly it’s meant there has been no way back for him.

I do wonder if Ox goes if we shouldn’t keep and convert Gibbs into an inverted left wing back?

you know Gibbs is left footed. Why would you have to invert him on the left?

I meant play him on the right hand side – in Ox’s position, hence the ‘inverted’ winger. We know he can play on the left wing, and is effective there so could compliment Saed nicely.

Might be the wrong time to be experimenting with him on the right though given we are two games in.

Even though he’s been unspectacular, it’s never nice to see one of your own leave. He’s always been efficient and I enjoyed his cameos on the left wings.

Should keep him as a back up to Kolasinac. Monreal is moving into a LCB position as he loses his pace and can be an emergency LWB option after Gibbs.

The only bump I guess is Gibbs wages. A back up should not be getting that much.

Time was, I thought he’d be England’s LB. Good luck to him, shame he never really pushed on.

he’s spoilt by earning twice what he’s worth, will never agree personal terms with a properly run club as long as he’s under that generous contract. unless Arsenal subside it.

Always felt he had a future with us. Alas, that’s not to be.

Are there any jobs going in Arsenal Transfer team?
I don’t have any experience but I’m pretty sure I could improve our efficiency and mental strength as the current transfer staff seem a bit jaded.