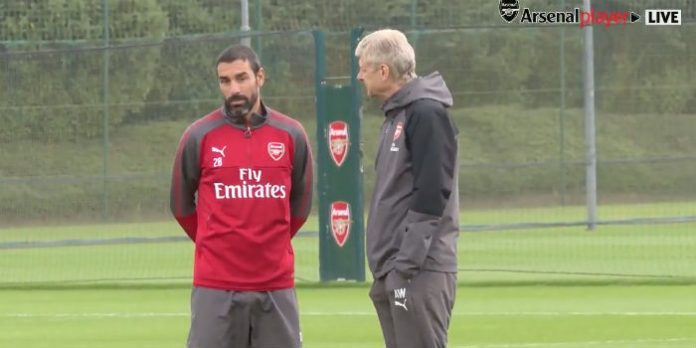 A host of Academy stars trained with the first team today with Arsene Wenger set to ring the changes for tomorrow night’s League Cup game with Doncaster Rovers at the Emirates.

How do we know all this? Because Arsenal broadcast the first 20 minutes of the session live on YouTube. You can watch the lads doing their star jumps and sprints in the video below…

Get Mad Jens in there as well

I’m all for letting Lehmann try out his managerial skills in the EFL games.

The Limp Bar
Reply to  Pedant

arsepedant
Reply to  The Limp Bar

Indeed, who the fuck would downvote that? Pires to start!

Lula
Reply to  The Limp Bar

probably hands shaking with excitement and hit the wrong button. its understandable.

Have a sneaky feeling we’ll win the league cup this season.
We’re long overdue.
Hopefully it’ll open up nicely for us, and we can use it as a tool to keep squad players fresh along with the Europa league.

Arsene usually pulls something out of the bag, I think the title’s beyond us.
But a European Trophy and one of the domestic cups would go down a treat.

And it would mean we automatically qualify for the Europa league

Nothing other than a league title will or should “go down a treat”! Don’t you think we’re long overdue in that respect too?

Winning the Europa and another cup this season would be fucking great.

Just start Jack, Callum and Riess and I’ll be satisfied. Although it would be tough playing with just three men.

God knows how we struggle with 11 players so 3 would be quite something ?

Hope to Chambers and Wilshire get a start.

Also, hopefully a decent plan (not AMN or Kolasinac) for LWB.

Maybe even dream of Walcott learning to play the 3421 system!

One step at a time. Lets teach Walcott how to play first – before we start burdening him with formations.

We seem to have a solid mid-week group of players that includes Ospina, Mertesacker, Maitland-Niles, Walcott, Holding, Elneny, Nelson, and Giroud. Add to these the likes of Wilshere, Reine-Adelaide, Chambers, and one or two others and it becomes apparent what tomorrow night’s eleven will look like. Regardless of the promise of Pires starting, the player I still most want to see in action will be Reiss Nelson. Just two and a bit months until his eighteenth birthday he’s as exciting a talent as we’ve had since Fabregas. He’s not only technically outstanding, but he produces goals and assists as well.… Read more »

Hoping neither of Monreal or Sead start. Even if it means using a youngster like Josh Dasilva who I think is playing LWB for the youth team. That’s the issue we have with playing both our LWBs in the same team. What about the following?.. ————–Ospina Chambers Mertesacker Holding Nelson Elneny Wilshere Dasilva —–Walcott Giroud Iwobi I suspect Arsene will play Maitland-Niles at LWB to squeeze him in though, unless he plays in centre midfield ahead of Wilshere. A 4-2-3-1 would suit this second team better if we had any actual back up full backs. That way we could fit… Read more »

What of mathieu debauchery? Where will he fit in?

Really hope we see Reiss Nelson in a genuinely attacking position for this game. RWB is nice and might suit him but doesn’t allow him the freedom of expression I would like him to have. I’d like to see AMN there, or Debuchy with AMN in Central midfield.

Had a look at the video and also the one last week.

Looks like, to me at least, we have some players who play well on game day but don’t look like “good trainers”. Of course the performance in the games is all that counts.

Not sure my expectations were correct or that the video is edited but I think I expected higher intensity than we have seen in the bits that have been shared. Maybe just the editing?

The clips always show them ambling around. Must be some PR exercise to make them look relaxed or something, but presumably they have hard sessions otherwise they would never make it through real games.

Really hope they take their chance to put their case forward to make the first team to Wenger. Chambers, Wilshere and Pires.