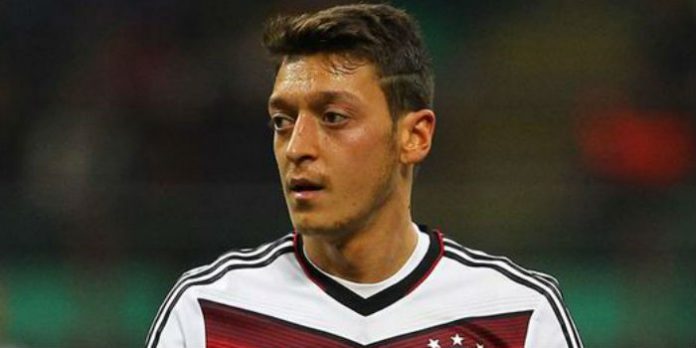 Mesut Ozil will not be part of Germany’s squad for their upcoming World Cup qualifiers against Northern Ireland and Azerbaijan as Joachim Low wants them to be fresh later in the season.

The Germany coach obviously views the two games as winnable without the Arsenal playmaker and fellow midfielder Sami Khedira, banking on the vast array of talent he has at his disposal these days.

Ozil has been dealing with a minor knee injury in recent weeks, and although he came on as a sub against West Brom on Monday, was not part of the Europa League squad for the game against BATE Borisov.

Explaining his decision, Low said, “With Mesut Ozil and Sami Khedira, I assume that they will be better rested during the international break.

“This is more important to them at the moment. What is crucial to us is that our players are in peak condition next year.”

It’s another example of sensible management from the German national team who have, in the past, allowed Ozil time off for friendly games and fixtures against relatively easy opposition.

It’s expected that the 28 year old will be fit and involved in the squad for Sunday’s game against Brighton, but whether he reclaims a starting spot remains to be seen.

rest of the season, I think he is off in january

Couldn’t care less whether Ozil comes back into our team?
Time to put together a first team that functions.
He’s just an expensive luxury that we’ve struggled to accommodate.
A joy to watch at times, but certainly not at others, I Certainly wont shed a tear when he’s gone.

When you have the best player in the world when it comes to creating chances, you find a way to accommodate him. Well apparently he’ll be moving to manure next season on a free. He’ll finally have a now world class striker playing in front of him in Lukaku.

I was screaming for us to buy one of Mbappe, Lukaku, Morata.
I repeatedly got told on here Lukaku’s first touch wasn’t good enough….
Lacazette seems decent, but he’s not at any of their levels, and also older with less room for progression.
Have we found a way to accommodate Ozil? Or matched his or Alexis’s ambitions?
If you think yes? Then you’ve accepted that this is now our level.
With Kroenke trying to buy out Usmanov? I can see the club sinking into oblivion.

Of course we haven’t. Alexis and Ozil have practically wasted their peak years at this club. Poor planning, inept coaching by Wenger are responsible for this. The 15/16 season will remain the most shameful for a supposed big side. The fact that the club thought positive attitude, automation and team spirit were going to be enough to upgrade our team was extremely laughable. If we had gotten a striker or even a wide forward that season and a DM, we would’ve won the league.

It’s been rubbish for them.

League titles?? How many of those??
How far did they go in ucl?? Thought so.

yeah, but wenger didn,t so we never, its the same old story every season, this season, next season

Unfortunately, Ozil and Sanchez do not have the kind of impact Carzola has on the team. Check it out, the decline in Productivity of the team in the last three years has to do with Carzola’s injury.

Rich, you’re not related to John Terry by any chance?

Neighbour’s toy is always better than yours, isn’t it? No matter who we sign, some people will always moan that the player is not “world class” and not better than another player at another club.

OMG I was yelling!!!!! for them to hijack the Neymar transfer. I was like telling anyone that would listen to put 300M down and give him 1M per week after taxes so we can be like soooo coool. Like other club supporters can be like wth why can’t we be like Arsenal.

Luckily, people like you who share your opinion are a minority. Sadly, they are always the loudest.

Good stuff, sensible management. Just waiting for the Daily Mail or someone to come up with a clickbait headline along the lines of “Arsenal contract rebel sensationally dropped from national team” ?

Big fan of Joachim Löw. He’s done similar things in the past, and he shows that he genuinely cares about the health and fitness of his players.

Yeah great manager but he also has a hell of a lot more talent to call upon than most international coaches.

What are the chances Low will join us, when Wenger finishes?

High. With BFG and Jens in there i would say very high.

Is that because we are the only Club that employees former German national team players? If thats the case then it must be a lock

Sad this might be the last season we see the best number 10 in the world wearing our colors. This guy has been unfairly criticized for not showing “pashun” yet when he’s playing, we are a much much better team in the final third.
I honestly pray the man united rumors are not true…it’ll be one of the most painful moves since RVP. Watch him go win a title and break the assist record under Mou.
Shame Wenger and the club have destroyed what looked to be a great team with potential to win things with poor planning.

Don’t forget Mourinho track record so far is – win the title in the 2nd season and turmoil in the 3rd before being sacked/quitting.

Not to say that, that’s what will happen at Manure as well but the 2nd season title will be a small price to pay, can’t bear him for a long reign.

Yeah because the FA cup is bigger than the ucl and epl right??

i would love this guy to replace wenger

Speaking of Ozil, one fact that has loomed large for me these few weeks gone by, is that the potential hole an Ozil exit would make in Arsenal is shrinking by the day.
Chelsea game was executed brilliantly without him, West Brom was overcome ditto. He is not looking as irreplaceable as he was last season.
A little less so with Alexis, but a fit? Welbeck (whose game I am getting to like a lot), and Lemar (Whom I hope we go back for in January), can completely fill the Alexis hole next season. My thoughts though.

Only way Arsenal was going to get Lemar was through the transfer of Alexis. In Jan if he is sold it will be for alot less only if Man City or PSG wants to add strength to their CL run. Without the 60M there is no way of getting Lemar plus I assume Monaco will still be in CL and probably wouldn’t want to leave in the middle of the season.

Yeah we looked great executing the game plan against Chelsea but scored no goals and offensively got weaker as the game went on.

Please.., Ozil and Sanchez need to f*ck-off already. Great players that they are, they don’t want to be here. And considering we’re gonna get f*ck-all for them when they do f*ck-off come the end of the season, I find their presence at the club, quite frankly, odorous!

In short, I feel they both need to……,you guessed it!

I’d rather see Jack Wilshire play over ozil after last night’s display. He offers much more all round.

Hoping we’ve got a secret deal with Joachim Löw to take over at end of Wenger’s contract (or ideally season after World Cup).