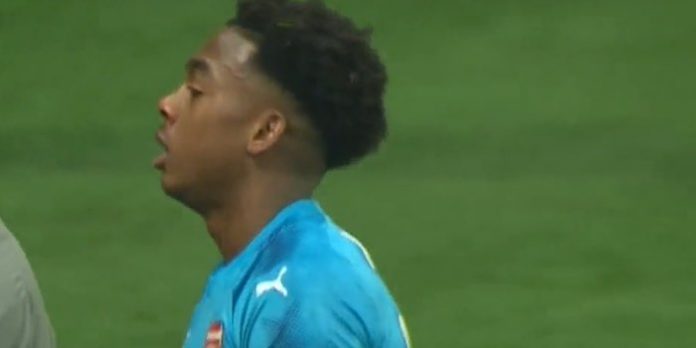 Considering he just turned 18 in August, Joe Willock’s display during the 4-2 win over BATE Borisov was one of real maturity.

The 18 year old finished the game with 91% pass completion, won 80% of his tackles, had four successful take-ons, and didn’t look in the slightest bit overawed at making his full debut away from home.

If the Europa League is a chance for some young players to showcase their talents, then he can certainly deem his night a successful one, and afterwards he said the packed crowd and the atmosphere didn’t bother him at all.

“I just do my best, but yes it was good. It was quite loud but I enjoyed it.”

And as for making his full debut, he continued, “Yes it was good, it was something that I’ve also dreamed of as a child and finally I’ve done it.

“I’m just happy that the boss had faith in me, but yes it was good. I thought I would start from yesterday’s training.

“I was in the set-pieces and today the boss confirmed it to me and he said just go out there and do your thing.

“I wasn’t really nervous, but yes it was good.”

We don’t know about you, and we could be jumping the gun a little here, but we reckon he thinks it was good.

Arteta: Willock has given himself options

Look forward to seeing him progress.

Yes it was good.

That is true, but I’m gonna have to really push the boat out here and say maybe it was good.

It’s not very often you see an 18year old handle the pressure of the crowd on a European night, but I think it was good

Confidence for a footballer is a good thing, he comes across as calm and quite mature for such a young man.
We may have a very decent player on our hands with this lad?

Played a calm and composed game considering his age and experience. Took a whack on the face and a boot to the back of the head from that big lump and still wasn’t put off his stride. Look forward to watching him again soon. Big up son!

was it good joe

Initially Europa League felt like relegation (it is but You know what I mean) but quite enjoyed both the matches so far mainly as it’s a chance for the youngsters and squad players what they can do.

Yesterday, one of the debutees – McGuane, never heard of him although I read Jeorge Bird quite regularly!

This is fun, although it’s quite worrying that any team we play with, we seem so brittle at the back. Maybe Mert as a defender, when he takes on the academy will teach the next generation to defend properly.

He had a little Santi in him. Left me very optimistic towards his future.

Also, not bothered by having three L’s in his surname.

Curiously, it doesn’t look half as bad as you’d think.

Thought both him and AMN did well. Reiss was a bit subdued given normal alacrity.

Overall, we suffered from some inexperienced moments covering the box with the mids slightly slow to return to fold particularly second half when they started to wane.

As for match up against BHA, hope we give Mustafi a break and we get to see Calum get an opportunity at the back with Koscielny and Monreal.

The rest of the team picks itself, usual fullbacks Kolasinac and Bellerin, Granit and Ramsey in midfield. Ozil and Alexis higher up and Lacazette up top.

You know what? Yes, it was good.

I flew into some good tackles, but yes it was good