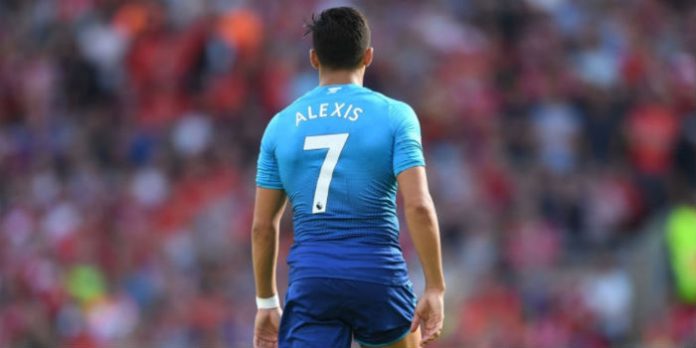 Arsene Wenger says he has no doubt about Alexis Sanchez’s ability to focus on the job at hand when Bournemouth visit the Emirates this Saturday.

The Chile international is due back at London Colney after a traumatic two Interlull, during which a move to Manchester City collapsed, his country lost two vital World Cup qualifiers and he’s endured media criticism about his weight, mentality and the influence of his new girlfriend.

Yeah. I wrote out emojis. Sue me.

“Yes, of course [it’s a good sign],” he said. “I have no doubt about Alexis’ mind or mentality.

“He needs to come back to full fitness, which he wasn’t at Liverpool. It was his first game.

“He had a negative experience with Chile, but he’s strong mentality and hopefully, he will soon be back to his best.”

The boss also touched on how close Alexis was to leaving for pastures new, although he didn’t want to go into too much detail.

“The transfer market is over. For us, there was a lot going on on that front.

“It’s very difficult for me to speak about that because the most important thing is to focus on the next game.”

I really hope so, but I’m not at all confident that it will happen.

He was branded fatter than his usual self and not making runs by the Chile youth coach. Feels like he’s already got options and is going to mope around and eat cheeseburgers… Especially if his teammates don’t kick on.

This latest post of his seems a lot calmer than the other one.
Now he’s away from the Chile team he can just knuckle down and focus on forcing a move out in the January window :/

Alexis this, Alexis that. Who gives a shit? He probably won’t be at Arsenal in January, he definitely won’t be a year from now. Am tired of reading articles of him everyday, let’s move on. Use him the best way possible til his departure, but don’t make him the centre of the fucking universe. And Özil, if you really like the club as much as your PR team makes it look like, sign a fucking contract or fuck off. At least Alexis has been clear (although professional, sort of) he wants to leave. Give Iwobi a run again, let Nelson… Read more »

If I read it correct, our manager is drawing assurances from a social media posting made by a want away player.
Lament how the mighty have fallen.

“Yes, of course [it’s a good sign],” he said. “I have no doubt about Alexis’ mind or mentality.

Copied from the article above – after the final day fiasco, the manager has not spoken to the player and is hoping that the social media comment is good sign. He was of course answering the question but this much is easy to infer from the statement.

So it’s easy to infer from and wilfully ignore as far as your concerned?

Wenger could be a bit of an ahole about all this. Alexis’ attitude hasn’t been great for some time. He tied to leave. Players evidently would be ok with him leaving. None of that helps team cohesion. Say want you want about Arsenal’s transfer window, but Arsène has had plenty of opportunity and fodder to make Alexis the bad guy in the press. He chooses not to. Everything he says reflects wanting to move forward and win games. We’re all (rightly) cynical about all this, but some credit to Wenger for keeping things classy and positive in a situation that… Read more »

On Saturday can everyone please count along with me the amount of times Alexis gives the ball away against Bournemouth. I think we should bench him if it continues.

Or we could support him and the team and give them every opportunity to win!

I didn’t say not support him I was just saying count quietly…not out loud mate. 🙂

Oh it was a positive comment? My bad. I was thrown by the whole waiting for him to make a mistake and take mental notes in unison part.

No, it was indeed a negative comment from me about Alexis who used to give the ball away a bit and chase after it and get it back. Now he just gives the ball way a lot.
Are we not allowed to voice our opinions about players anymore?
It’s hardly off topic? 😉

Of course we can voice our opinions. It just sounds a bit whingy sometimes. Think I’ll forgive him if he scores another 30 goals this season and assists double figures. There are others more deserving of criticism in my opinion.

If you know my posts I am not a whinger mate. We have Wenger for this season at least so let’s get on with it.

Is this Original Paul?

Would you change the name to the Original again, it makes it easier to know when to downvote or nto.

Would be much easier if people couldnt use the same username as another. I would think the technology to make this happen is out there somewhere….

Don’t think the guy ever said something negative about anyone ever. Except maybe a cunty ref or Mourinho

Maybe that’s part of the problem

Yup. And while that certainly is a bit of a smokescreen, it’s a classy smokescreen.

I never liked Alexis that he shows his frustration during the match. which creates negative impact between fans and as well as player. Being a professional he can be mad about the team if they faulty but if you show give up altitude towards the team u play that will not bring good.

I have gone beyond being bothered by this or indeed anything else that involves Arsenal or Arsene Wenger.
There is nothing positive to say about the club or how it conducts itself anymore.
The sooner all the negative aspects of the club are gone the sooner it can move on and improve.
Until then we are stuck with Wenger, Sanchez and the old biddies running this club…

Maybe the players all need to shake dicks and make up, start working really fucking hard and wenger can help by playing players in their best positions, we need 3 points badly, no more bollocks please. coyg

How about we take a moment to encourage Mezut?
https://www.youtube.com/watch?v=HCbTwCzJ-dQ

We really need Mezut at his best and with our support he might stay. https://www.youtube.com/watch?v=Dq0F4Sg4GTs

I’m sure AS7 will be focused to do his very best before, maybe, going to a different club.
I still play the game at 41, and the last time i play for this competitive team, i wanted out because we had no desire to win games. A year later, i play for a different club, that wants to win every game.
Makes me wonder what Alexis is going through.
Arsenal as a club must have that hunger to win games, if not let AS7 go. No hard feelings

I think we have cover in wide areas. We can also play BOTH Lacazette and GIroud with Ozil in the hole. So Alexis can take his time to recover fully if need be. Where we have less leeway is in midfield which remains a bit of a conundrum of our own making. Granit is a must (despite flaws he has to work on). His passing range is unmatched at the moment. Who starts next to him is the question as we are now reliant on internal solution and organic improvement. 1)Ramsey can play more disciplined if shackled from his better… Read more »

You have to commend Alexis.

Whatever he does he gives 100%

I’m sure he wanted to move on.

Its no wonder Wenger prefers to risk losing the money on him.

The man’s attitude is examplary

Jesus I really am an impressionable twat. In my gut I lean towards being very cynical about the Alexis situation, but then he makes this meaningless tweet and I feel all warm and fuzzy and have a shred of optimism that he’ll sign a new deal and lead us to glory.

How did we ever express our feelings before emoji’s? I am lost for words…or symbols.

that didnt work as well as intended. But my point still valid..ascii art was a precursor to emojis.